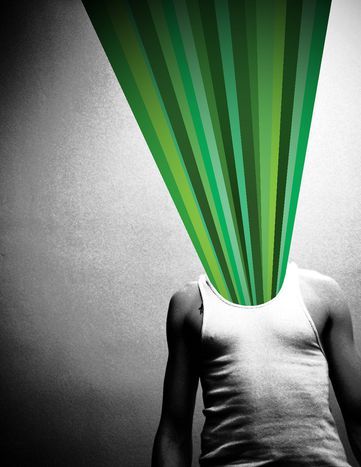 The importance of being eco-ideological in Budapest

Green is in fashion in the Hungarian capital, but the word is often just an empty trunk, a sales argument in a consumer world which forgot its ecological foundations long ago

As you walk to the central Budapest metro station of Deák Ferenc, you come across numerous business which are promoting design products in the windows. It is as choked with the concept of design like as if it were choked by the arrival of Coca-Cola after communism, as in other central and eastern European capitals. I’m on the way to the Design Passage exhibition which is running throughout the month of November in the Hungarian capital. Two of the facades of the new office building in Central Passage are decorated with hanging plastic bottle garlands. A green carpet winds into the depths of the courtyard. They are all signs that I must have found the right place, except that the carpet is made out of plastic and the courtyard is empty.

I do come across an interior design workshop from Hannabi Freestyle Home. ‘We’re trying to be ecological,’ explains Anikó Racz, one of the interior designers, as she warms her hands on a cup of tea. ‘But sometimes just having good intentions is not enough. The wood which is needed to make out furniture comes from ecological forest stands, especially from Finland, because we don’t have that kind of thing here in Hungary,’ she continues, resigned. Textile designer Marta Paczona imports the wool for her ecological projects from New Zealand. To be precise, her one ‘green’ project, which is Austrian-Hungarian carpets. ‘As an artist I work with different materials and I wouldn’t want to limit myself to just one,’ she explains. 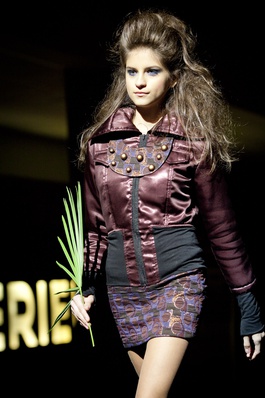 Gabriella Kiss is another textile designer but also co-organiser of the exhibition. The energetic middle-aged brunette is visibly overjoyed at the sight of the press and throws open the door of her stand to me, which looks like a crime scene from outside. From afar, the red bricks, police stickers and strewn red objects evokes a scene from the red sludge disaster in Hungary in the late summer of 2010. Was the October catastrophe an inspiration for the ecological theme? ‘The owners of the Central Passage hired me because they wanted to occupy the unused space in their office building. Young designers booths should awaken interest in the Passage and encourage designers to drum up customer support and eventually set up business there.’ So where does eco-design come in as a project theme? ‘Ah you know, it’s cool right now. Come this evening, we’ll show you the clothes we’ve made out of flowers!’ gleams Gabriella.

I get to the show around 8pm. ‘There are even containers for waste separation,’ murmurs a French student who lives in Budapest and is accompanying me tonight as a translator. The first model appears on the catwalk wearing a skin-tight, shiny outfit with metal studs and admittedly few floral designs. As for clothes made out of flowers, the only green element in the show is the bouquet held by one of the models. I realise that Gabriella is whirling around in the audience and handing out balloons shaped like flowers. Hopefully members of the audience will remember to throw the deflated ones in the right rubbish bins…

The hunt for Hungarian eco-designers continues at the Bambi Cafe where I am meeting artists from the KONKRÉT LABOR collective. It reminds me of a socialist canteen, its café an example of how capitalism has made a brand out of everyday socialist life. Tímea Tóth and Linda Csővári, the female part of the collective, show up after a while. Most of its members ograduated from the Moholy-Nagy university of art and design (MOME). ‘Our first project was a tree made out of plastic bottles for the most popular club in town, Gödör.' More recycling-based projects ensued after this initial success. However, eco-design is not the only trend for the KONKRÉT LABOR team – after all, green is not profitable. ‘Hungarians are very conservative,’ says Tímea Tóth. 'They don’t buy chandeliers made from recycled plastic bottles because they care about what their neighbours might think.’ Another element arising from recycling is that it doesn’t lead to the creation of newer useful and valuable design objects. ‘At a recent exhibition we heard comments like ‘how lovely, I’m going to try and do this at home,’ says Tímea, shaking his head.

'My concept on design is quite different from other students who think more artistically than I do,' explains Panni Pais, a sociology graduate and activist in the Cellux Csoport group which organises eco-conscious education for children and young people. She is more criticial about the new 'green ideology'. ‘I think about how an object can have an impact on its surroundings– on the environment, on people and animals.’ Panni prefers to distance herself from eco-design. ‘I avoid all kinds of labels which are used haphazardly. For example, why is a paper plate presented as ecological? I’m not about following an ascetic lifestyle but about making a conscious decision each time I have to.’

How ecological is eco-design anyway, I ask Tamara Steger, lecturer at the environment department of Budapest’s central European university, whose research specialises in the role of the artist in popularising ‘green ideology’. ‘Art has always mirrored changes in society, but many revolutionary currents are absorbed in the domineering consumer system. The label ‘ecological’ serves to boost the need and not its constraint.’ Are Europe’s offspring designers working in line with the current? ‘How could they not? They’re living under the conditions created by the institutions which mar you from taking a different direction. It’s a no-brainer: you can’t separate rubbish when there are no separate containers.’