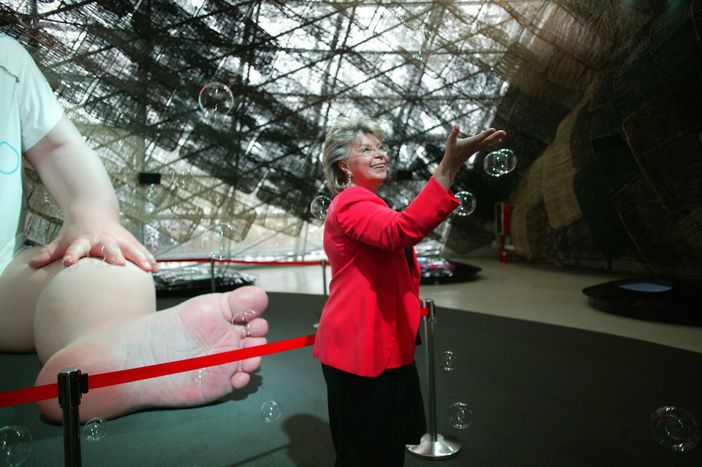 The hills are alive with the sound of Viviane Reding

The EU commissioner for justice, fundamental rights and citizenship ‘comes from the heart of Europe,’ insists former EC president Jacques Delors, as he introduces her to French students at Paris’ political institute Sciences Po. Meanwhile, Reding goes all out to be less bureaucratic than she is

The event organised by the prestigious Parisian university Sciences Po and the think tank ‘Our Europe’ (Notre Europe) has invited European commissioner Viviane Reding to be a guest speaker just one year after her skirmish with Nicolas Sarkozy over his treatment of France’s Roma citizens. Faced with formal accusations from Brussels, the French president, stoking his popularity amongst his electoral base, replied with no less tact that Reding would be well-advised ‘to welcome the Roma into her dear Luxembourg.’ 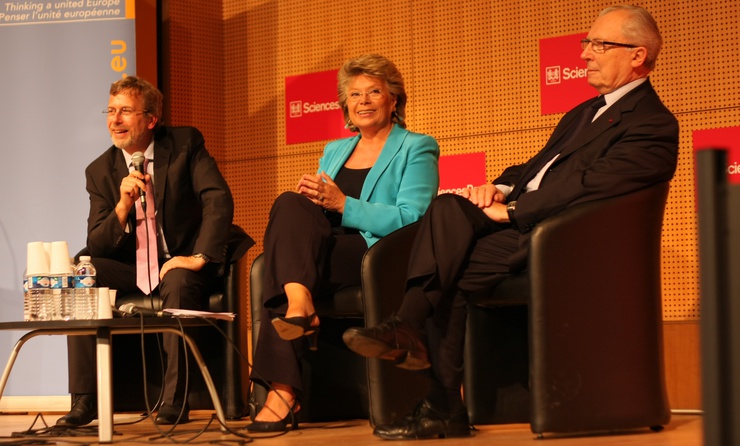 One year on, not much has changed. The French government, represented by interior minister Claude Gueant, is threatening to expel all Roma minors who commit petty crimes on French territory. Meanwhile, the vice-president of the European commission reminds us that the European union is ruled by the fundamental rights of its citizens as stipulated by the Lisbon treaty. These rights superpose themselves on those of each country, creating diverse sections of legislation. In concrete terms that means it is not possible to expel the citizens of a Schengen country on the grounds of their ethnic or national origins.

Viviane Reding looks how a vice-president of the European commision ought to look. Add the labels ‘christian democrat’ and ‘Luxembourgian nationality’, and the portrait is almost complete. The 60-year-old attempts diverse tactics to seduce her student audience, frequently mentioning the success of the erasmus programme and the passion which the European project ought to excite among the young. She even invokes social networks as the tools of a new Europe. Careful though, she warns: ‘Some of my colleagues spend too much time on tweet! (sic) and so don’t have enough time to do their job.’ It’s a shame the one-time commissioner for information society and social networks doesn’t know the real name of a social network called twitter. As she says this, Jacques Delors, seated next to her, starts talking loudly on his telephone, prompting embarrassment and some laughter. ‘You see,’ Reding remarks ironically, ‘the young generation use new technologies too much!’ The statesman Jacques Delors, who has been a regular in Brussels for thirty-two years now, leaves the stage due to urgent business.

The commissioner is boring from start to finish. She may insist on using the words ‘heart’ and ‘love’ (and on children born to erasmus couples) to make Europe stronger, but it’s with the enthusiasm and statistics of an accountant that she answers the students’ questions. Considering the debt crisis which risks infecting the periphery of Europe she replies with the usual clichés, full of smug enthusiasm for the euro. Scholarships may be collapsing and Italian debt sky high, but Reding continues to talk about the aims of a balanced budget and new economic governance. Her statements about Greece, which is waiting for the official declaration of its default on debt, are similar. New IMF head Christine Lagarde repeats that Europe will support the country but that it must accept reforms to get out of the crisis. In other words: ‘If you want our help, let go of your economic sovereignty!’

You got the wrong commissioner

The students aren't riled by this vision of Europe, which is similar to the one presented to them in lectures. However, Parisian journalists are. They have a harder time putting up with this lax atmosphere, which is akin to that of Berlaymont, the European commission’s building in Brussels. When one Reuters journalist poses as a student to ask a question on the subject of the Roma, Reding responds with the greatest of prudence. Thirty seconds later and the commissioner’s spokesman is clambering over desks to catch the young reporter who has returned to the journalists section to start writing his article. The cafebabel.com team also risks a question about Frontex, which will soon be reinforcing its border controls. The commissioner opens her mouth to speak - ‘Stop!’ the young spokesman interrupts. ‘You should address that question to Cecilia Malmstroem!’ That, in case you didn’t know, is the Swedish European commissioner for interior affairs.

If Europe is going to get out of this crisis, which is political and social as much as it is economic, she will have to call on different personalities. Or at least on other methods. It is high time that the European institutions propose new solutions to prevent the sombre threats facing Europe from becoming reality. Solutions which should differ from the overdone litanies on how great Europe is.