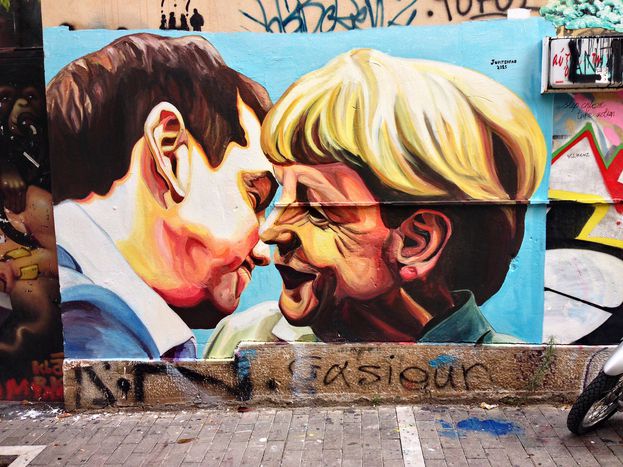 After the latest scandals Germany should refrain from behaving like a super power and choose a milder approach to its hegemonic position in Europe.

First it was Volkswagen, then the World Cup. If next someone found out that the big breweries secretly do not obey the law of purity it might be possible that a whole country drifts into identity crisis. As if destroying the trust in one of Germany's main symbols of economic superiority was not enough, Spiegel demystified A Summer's Fairy Tale. That is how the Germans like to call the subtropical month in 2006 which boosted their collective ego enough to rise as a regional power despite only making it into semifinal.

The thing about fairy tales is that they are not only beautiful, they are also made up. Just like the United States broadcast the American dream into the whole world, the lie that everyone can make it while in reality having almost its whole lower class incarcerated, Germany depicted itself as the celebrating unified nation that represents hard, honest work at the same time. Surprisingly, it is rather the latter which is not true. Germans may not have become Italians but ever since 2006 there is this hint of dolce vita in the streets. One might even be able to catch a German smiling while enjoying an organic latte in the shoreditchy suburbs of Berlin, Hamburg or Munich.

Everyone who ever tried to find a WiFi hotspot in one of their trendy cafés will know what Germany's actual problem is. While slowly modernising its society it failed to do the same with its economy. Though it might be surprising Germany is still the sick man of Europe, but unlike ten years ago it is still trying to cheat death while its neighbours already face it. GDP growth rates are comparably stable but far from impressive, national debt is almost at 80% and – most alarmingly – the country is sleeping through the beginning of the digital revolution.

The Merkel administration is resting on its supposed success and does not initiate the necessary reforms to make a shift from an export-based heavy industry towards a modern, digitised economy.

None of that would not be too bad, it still works better than any other European system. However, Germany is not only exporting goods but also its economic model and with it all the shortcomings. That shiny image of a corruption-free and prosperous nation that has been spread around the world is simply not true. Germany's economic power mostly stems from its size, not its functionality. The Nordic countries have a much more stable economic development, less corruption and a less divided society but lack the political impact and will to spread their system.

Germany on the other hand as a regional power has adopted characteristics of a super power to promote Pax Germanica, a mixture between austerity, neoliberal structural reforms and a consensual technocratic political elite in a non-ideological centre. Just like Pax Americana it is spread with the missionary zeal of a 19th century colonial power, though not with military but through economic means with a hypercompetetive export sector and the imposition of debt. What they also have in common is being based on the fiction of an almost perfect society.

The latest cases of corruption, which are definitely not isolated ones in a country that took 11 years to ratify the UN Convention against Corruption, show that this is hypocritical and dangerous. Forcing an already flawed system on countries such as Greece, Spain or Italy which lack the social predispositions for it only reveals the absence of vision and sustainability in German leadership. A bit of modesty would do Germany good, there are enough burdens within its borders, even without the refugee crisis.