The first Gay Pride: what about this metaphorical glass?

The most loyal readers of my blog must have been wondering, why was I silent about the first demonstration for the rights of homosexuals, bisexuals and transgender people in Lithuania. In fact it has nothing to do with the Baltic Pride itself, only with the end of the academic year. Well, here it is, I'll try to give you as much information as possible.

The most important thing is, obviously, the fact that after so many obstacles the Baltic Pride happened, and, although I did not see it with my own eyes, it seems to have been a beautiful one.

This is how the goes.Baltic Pride demonstrations have been taking place in Riga (since 2005) and Tallinn before. In 2008, an application was submitted to host the event in Vilnius, but it was rejected by the municipal government. The government (the mayor was from the nationalist-populist party, Order and Justice) was effectively blocking any gay-related events from happening in Vilnius space, including pan-European events. Newspapers unethically portraying and openly demonising homosexuals hardly ever receive any punishment from journalist self-regulatory institutions (which are generally rather weak). And there have been quite some attacks against homosexuals in the media. Although Lithuanian laws clearly forbid discrimination on the basis of sexual orientation, there is a lot of implicit unequal treatment, which is very difficult to prove. The Lithuanian Constitution stipulates that marriage is a 'union between a man and a woman', therefore to legalise gay marriage, the country would have to change its constitution (which is possible by referendum or a large majority of MPs). But marriage is not even on agenda in fact. The law on civil partnership has not been adopted and effectively enforced. The bill was developed in 2004, but returned for 'corrections'. Gay communities in the Baltics have been rather split regarding the issue of parading. I read that 82% of Latvian gays surveyed opposed the first pride, perhaps in fear that the parade would stimulate even more homophobia. There are very few famous people who would be openly gay in the Baltics. The mainstream society is split perhaps even more profoundly. For some gay marches are legitimate struggles for rights and against discrimination. Others believe that homosexuals should have full rights, but parading is not the way to go. Still others maintain that homosexuality is a perversion to start with, so what rights, what parades?

The of this event is obviously huge. Although the first Baltic Pride in Vilnius was far from perfect (Prof. Dovid Katz, who watched the event with the crowd of spectators, was modified swastikas and uncontrolled violence among the spectators). Most homophobes perhaps did not change their mind. However, the Baltic Pride 2010 was an unprecedented breakthrough in the work of the Lithuanian police and courts, as well as the Vilnius municipality. Not only LGBT people took the courage to go out in the open and admit what they are. Lithuanian police also had a chance to show that it stands for law inforcement. Police officers were repeatedly insulted and harassed by the neo-nazi spectators and the two extremist politicians. I believe they handled the situation quite well and nobody was hurt. The courts also resisted ideological pressures and did what the law requires them to do. The split in the conservative party, with the mayor defending the Baltic Pride and an MP violently protesting against it might catalyse some renewal within the party.This year the application to host the Baltic Pride received different attention from the municipal government (conservatives this time). The mayor allowed the LGBT community to demonstrate. The big question was, where. Allowing the demonstration, the government tried to effectively marginalise it in the public space of Vilnius. The new 'venue' designated for protests to take place was not given to the demonstrators, supposedly due to heritage reasons, as a part of the territory used to be a Jewish cemetery. Some other part of the city was given for the demonstration. As the time was getting nearer, discussions did not stop. Many people were arguing that sexuality is not to be made public and that the parade will badly influence children. 3/4 of the surveyed people said they oppose the demonstration. One extremist parliament member, Petras Grazulis, threatened to bring a gun to the demonstration. The only openly gay politician, Rokas Zilinskas, said it many times on TV: he does not support the demonstration either. Meanwhile, the Swedish minister for EU affairs, Birgitte Ohlsson, announced she will join the parade. Rokas Zilinskas, together with the Cambridge-educated MP Mantas Adomenas gave a talk in the European Parliament, claiming that discrimination against LGBT people in Lithuania is successfully curbed and there is nothing to make a fuss about. 3 days before the demonstration was expected to take place, the interim prosecutor general asked the Vilnius District Administrative Court to revoke the permission based on public safety concerns. He claimed that some threats were received and the police will not be able to take sufficient care of the demonstrators. The world reacted immediately. Amnesty International and various other organisations mobilised support for the Baltic Pride. A Facebook group in support of the Baltic Pride reached 2000 members in a day. People in Lithuania and abroad were curiously following following the events. Here is my friend's blog entry. The tension revealed the diversity of opinions in the Lithuanian society. Rokas Zilinskas, the openly gay MP, announced that he is ashamed of the decision, that he had changed his mind and will take part in the demonstration if it finally happens. Andrius Navickas, the editor of a Catholic news portal, wrote a beautiful editorial about how miserable was the decision to prevent Lithuanian citizens from demonstrating for their rights. While some Catholic and Evangelican priests were planning to hold services for the homosexuals to drop their 'flaunting', at least one was planning to hold a service for the parade to take place safely. The conservative mayor of Vilnius issued a statement that it's the job of the police to take care of public safety, and people must have the right to demonstrate. One day before May 8, when the Baltic Pride was supposed to take place, the court announced that there are no legal grounds to suspend the permission to demonstrate. People were hecticly preparing to go to the streets. How the parade took place, you can read and see here. Some videos and comments also here. As you can see, only people with permissions were allowed to demonstrate. Meanwhile the crowd of spectators consisted of both sympathisers and neo-nazis. Two provokateur politicians, the aforementioned Grazulis and Kazimieras Uoka, who previously patronised the neo-nationalist march on the independence day, tried to break the fence and reach the demonstrators. Hopefully, their legal immunity will be revoked and they will be arrested for public nuisance.

Most importantly, the passive opponents in the mainstream society had to notice some important factsof the political, religious and cultural leadership were very different. Bernardinai.lt that I mentioned before, anything but a pro-homosexual medium, published several pieces supporting equality of all citizens before the law. "There should not be "equals" and "more equals" in the state, there must not be 'us' and 'them'," wrote its editor Andrius Navickas. Algirdas Butkevičius, the leader of the oppositional Social Democratic faction in the parliament, said that "This parade is not necessary nor obligatory", with most leaders of political parties saying something similar, with the exception of the Liberal Movement. Some groups of Catholics in Vilnius and Evangelican Lutherans in Klaipėda announced they would hold a service for people to change their minds and for the Baltic Pride not to happen. Meanwhile, the Catholic Church leadership made an announcement that homosexuals are to be respected, only their behaviour is to be condemned.The people who demonstrated are no monsters and no chimeras from Brussels. They are regular Lithuanians, young and old. Many straight people joined too. Here is a very nice poster saying, "I'm a Christian, straight, father of a family. I support human rights": 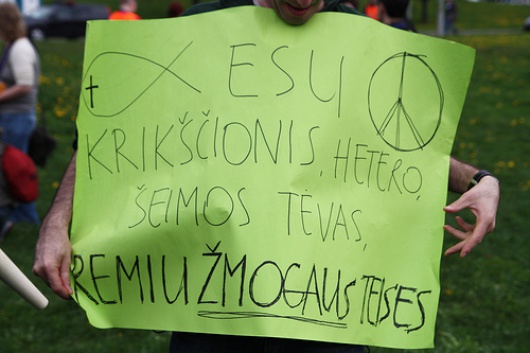 The people who, remembering videos from the Love Parade in Berlin, fantasized about gays making out in public and 'corrupting' children around, could clearly see that it was not gays, but their opponents who shouted and displayed obsenities on their posters. Nothing horrible happened, and, with adequate police forces, public order was ensured.

Thinking about it, it's unbelievable how Lithuania has changed during the last 10 years. In early 2000s, when I graduated from high school and some classmates emigrated to study abroad, it sounded so exotic to hear their accounts on seeing gays openly kissing in public. It was beyond our imagination. When I joined a debate club at the university (debate clubs are usually groups of educated and tolerant people), it was completely acceptable to use the argument of 'traditional family values' arguing against more rights for homosexuals. While certain forces still use such arguments, many of us have learned so much about what homosexuality is, how it 'works', and what the so-called sexual minorities actually want, that it's breathtaking just to think about it. Of course, people who are facing difficult and oppressive situations daily want their full rights here and now. Of course, there's still a long way to go. But I have a hope. And here the Swedish minister, one of the Baltic Pride participants, how the glass is half-full.