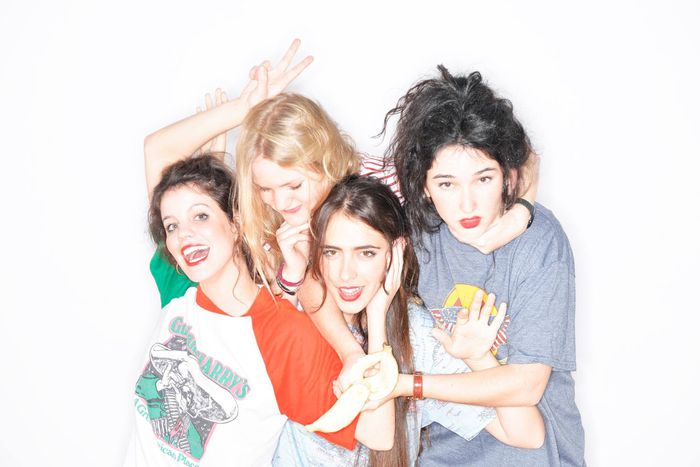 For the 5th year running, Paris's Pitchfork Festival opens it's doors to the public, putting together 3 days of up-and-coming artists, showcasing a different kind of sound that's moving faster than a roller coaster. To make sure you don't get dizzy, here's our choice of 5 acts the watch out for in the future from this year's event.

"We had only one day of shooting so we decided to film the way in which we live our life..." This sentence, the caption from the groups first music video, is a great example of how the four members of Hinds decided to approach the music world. Recorded in a bedroom somewhere in Madrid, the new all-women Spanish rock sensation is in the process of charming the planet bit by bit armed with just two guitars, their nonchalance, and their lo-fi aesthetic. This is evident in the video for "Chilli Town", which presents itself like a home-made version of the Harmony Korine film Spring Breakers, except with more Coca-Cola and Sunny Delight.

Behind Kanye West, Azelia Banks or Drake, there's one man with a quirky name: Hudson Mohawke. For sometime, the 29-year-old Scottish DJ has kept himself busy contributing bits and pieces to some of the world's biggest stars, but since the release of "Chimes", which was used to promote a well known apple product, this Glasgow native decided to work on his own personal sound. The result is the album "Lantern", released in June 2015 through Warp Records, the label Hudson uses to distribute his hits.

Imagine yourself with an aching head on a Sunday morning, curled up under your duvet while the kettle whistles. The music of NAO is like your tea and hot buttered toast: something you've made thousands of times but that always gives you the same glorious happy feeling. This electro-R&B number, with a twinge of soul, titled "In the Morning", appeared on her premier 2014 EP, So Good. Yes, clearly, this is going to make those autumn hangovers a little more bareable.

Evidently, the British electro-soul scene has a lot to offer. Propelled by the success of groups like Disclosure, a whole generation of artists have jumped at the chance to augment their personal groove with the sounds of the machine. London based Dornik, friends with Disclosure, is one of them. Former drummer to Jessie Ware, Dornik Leigh has released 2 singles with PMR Records and in the blink of an eye has become the Frank Ocean of South London. Released at the height of summer, his self-titled debut album Dornik, manages to maintain the hype and positions the artist in the same musical field as Michael Jackson, while managing not to parody anyone.

The only French artist present in our line-up, why are we 'introducing' Laurent Garnier if the 49-year-old has already established himself as a well known presence? In 2015, the former resident DJ of The Hacienda in Manchester has released Home Box, which takes the form of "a sort of best of 2014" mix for the artist.  He's come to collaborate with the slam poet Abd Al Malik for the forthcoming album, out in a few weeks. This shows just how confident the Godfather of French techno has become with going outside his comfort zone. It goes without saying that it will be him who closes the festival.