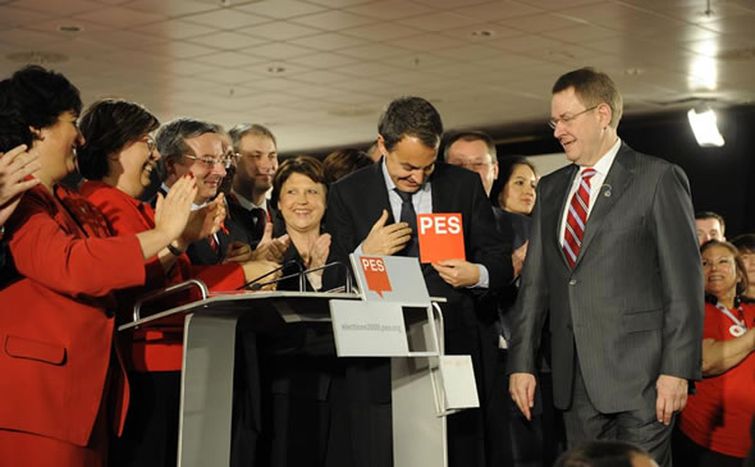 The European elections in June are socialistly, manifestly Parisian

Ideology or pragmatism, consensus or confrontation? What do we want from the European elections in June? In rainy Paris, the socialist manifesto is making waves

Paris, a grey day in mid-December. Pedestrians scuttle along the boulevards, through damp metro stations and over the glistening cobbles of grand squares, reluctant to emerge from beneath their umbrellas to talk about politics. But ensconced in the bustle and warmth of the poster-lined offices of the Parti Socialiste’s Parisian branch (PS-Paris), Aleksander Glogowski, director of communication, is in an upbeat mood. ‘An excellent document which will enable us to win!’ he proclaims. The text in question is the European election manifesto of the party of European socialists (PES), a fifteen-page statement of policies and visions adopted at the council of Europe’s centre-left parties in Madrid on 1 December. It’s a text with a distinctly Parisian flavour.

Indeed, the PS-Paris’s unique ‘Europe commission’ prefigured both the PES’s internet-savvy activist network and the grassroots consultation process upon which the manifesto is based. Nicolas Nordman, the commission’s secretary, explains eloquently how this organisation brought together European-minded PS activists with members of EU sister parties living in the ville lumière. It made the Parisian presence felt at the 2006 PES congress in Porto, obtaining a copy of the text voted by party leaders and – ‘without being asked’- submitting a written response outlining possible amendments. In the words of Glogowski, this provocative move ‘challenged the fait accompli precedent’ and paved the way for a more democratic composition of the 2009 manifesto.

Is the importance of offering a clear choice between left and right a Europe-wide necessity?

Here too the commission consummately pushed conventional boundaries. An extensive series of debates and workshops were held in spring 2008, in which Paris activists put heads together to construct a detailed contribution to the manifesto consultation process. Several of the Parisian proposals appear - obliquely and otherwise - in the final document; Glogowski highlights the commitment to a European framework for public services as a particular example. Above all, both he and Nordman stress the importance of offering a clear choice between left and right. One wonders: is this a Europe-wide necessity, or specific to the French left? After all, the PS is still buzzing with the fallout of Martine ‘signpost’ Aubry’s leadership victory over former presidential candidate Ségolène ‘weathervane’ Royal.

But perhaps this really is more than a party-political point. As the rain splatters on the flagstones of central Paris and a bitterly cold wind picks up, it does not take long to confirm that widespread interest in Brussels politics remains a fickle goal. The mention of the European elections produces little hostility amongst members of the public, but it hardly evokes great enthusiasm either. In a country with an impressive 84% national election turnout, it seems that supranational politics do not evoke anything like the passion stirred by battle for the Elysée. The consensus – shared by the well-informed, the unaware and the downright indifferent – is that the impetus for greater involvement needs to come from above. 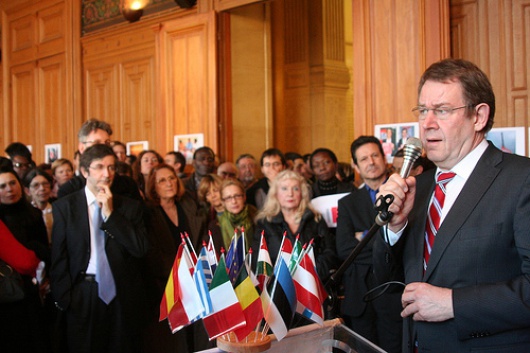 What strikes one in Paris - (discarding that waggish answer: ‘a taxi’) - is that voters are not rejecting Europe, so much as responding to the apparent nebulousness of what precisely is at stake. And so it is that key votes (the referenda upsets in France, the Netherlands and, recently, Ireland) are undermined by unrelated issues that fill the void where lively, relevant debate and personalities should be. In this respect, what could be more beneficial than making the elections more ‘political’? Real debate within individual European parties might, as PES president Poul Nyrup Rasmussen (pictured above left) claims, give activists a sense of ‘ownership’ of their party’s programme, enabling them to present it to voters as a true reflection of grassroots concerns.

In the seventeenth arrondissement, a stone’s throw from the Arc de Triomphe, the local branch of the centre-right UMP see things somewhat differently. Here Jean-Didier Berthault, a Gaullist city councillor, is sceptical about the manifesto, arguing that ‘we need to build Europe on realities and stop conceptualising’ and attributing the manifesto project to the socialists’ ‘desire to put everything in writing.’ This is a fair point – if Europe has a flag, anthem, and (almost) a constitutional treaty, maybe ‘pragmatism’ ought now to be the word of the moment.

Yet today’s blustery political climate seems to reward the bold over the cautious – in the UK prime minister Gordon Brown is reaping healthy poll advances against the ‘do nothing’ conservatives, and German chancellor Angela Merkel’s reputation for prudence seems to be doing her few favours in Berlin. 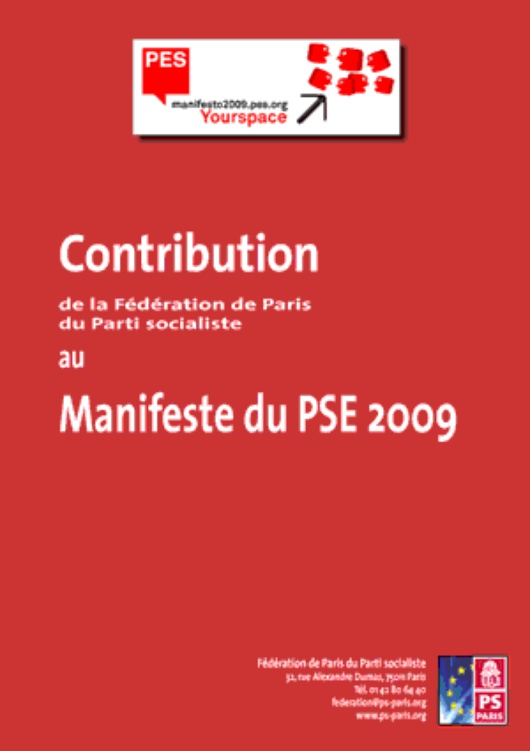 The PES is confident that its manifesto, at the centre of a proactive campaign to outline a clear policy difference, will enliven debate by presenting voters with a clearly articulated political narrative. Given visible leadership and ideological conviction, this surely has the potential to make the European elections more than a choice between different ‘administrators’. The right has described the manifesto as a ‘dream without a plan’, to which Glogowski responds that it is too late to use this line of criticism – the ideals of the project are ‘already a reality.’

One thing is for sure; for better or for worse, PS-Paris has acted as a catalyst and vanguard in the development of PES strategy - it could be well worth keeping an eye on the French capital in the run up to the elections. Will the manifesto prove to be a hollow gimmick, or the gust of wind that parts the gloomy storm clouds hanging over Europe’s political firmament? Time will tell.