Presidential candidate Ségolène Royal is officially leading the left in the race for the Elysée. Just don’t expect too much from the candidates

There was a period earlier this autumn when European Commission President José Manuel Barroso must have wondered just how many other French presidential hopefuls would come knocking on his office door ahead of their official party nominations. The centre-right frontrunner and current Interior Minister Nicolas Sarkozy’s September 8th visit was closely followed by Ségolène Royal, the rival candidate who took 60% of the socialist vote.

Europe seems likely to be an important issue in next year’s elections, and with it expected proposals from the main candidates about the entry of Turkey in the EU and the European Constitution. Indeed it was French voters who plunged the Union into one of the most serious crises in its 50 year history with the rejection of the Constitutional Treaty last May. There is widespread expectation that a new face in the Elysée will be well-placed to turn things around.

Yet if the rest of Europe is looking to France for leadership, it is likely to be disappointed. Genuinely fresh thinking appears thin on the ground. But can Europe really expect fresh ideas from less than fresh candidate faces?

Sarkozy first entered politics at 22 and has been the UMP nominee-in-waiting for what feels like an eternity, even though the party will not officially appoint its candidate until early next year.

Ségolène Royal, president of the Poitou-Charentes region, was joined by two of the socialist party’s ‘old guard’ in the shapes of former finance minister, Dominique Strauss-Kahn, and Laurent Fabius, former prime minister during the mid-1980s. Protest votes that fall the way of the Front National landed in the lap of Jean-Marie Le Pen, a politician first elected back in 1956.

The most pressing issue facing the Union is arguably that of institutional reform. How can French and Dutch concerns be addressed while keeping the reform process moving? The candidates unanimously agree on one thing only: resubmitting the existing text to the French electorate is not an option. As Nicolas Sarkozy recently said, ‘the vote of the French was clear. I will not be the one to tell them that they misunderstood the question.’

Instead, his ‘mini-treaty’ proposal would be lifted from the Constitution and submitted to a process of parliamentary approval in the context of a standard treaty revision. It would address important institutional reforms such as the creation of a European foreign minister.

‘No’ votes will thus allegedly be circumvented without humiliating those countries which voted ‘yes’. On the left, proposals about what to do with the Constitution appear even more uninspired. Both Fabius and Royal agreed that some vague form of alternative treaty-drafting assembly should be established. The resulting document would be submitted for approval to national referenda or parliamentary votes all scheduled for the same day: a high-risk strategy, for sure. 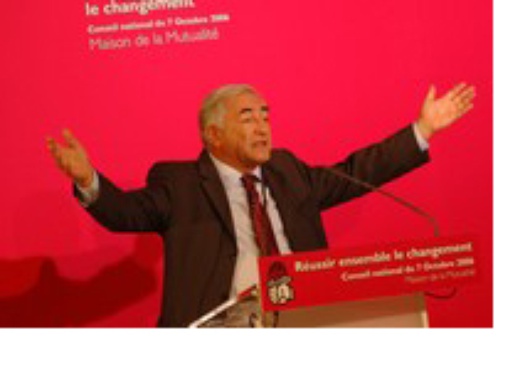 What about the wider question of reform? Nicolas Sarkozy was at one with Dominique Strauss-Kahn's suggestion of transferring responsibility for the Commission President’s appointment to the European Parliament. All candidates unanimously agreed on ‘more Europe.’ Royal is pressing for more competence on renewable energy and the environment; Fabius had focussed on social affairs, and Sarkozy on the sensitive issues of immigration and tax, albeit through a new ‘super qualified majority’ voting system.

The question of Turkish accession looms largest on the enlargement agenda. Candidates of all hues seem opposed to the idea of Turkey’s full membership of the EU. It was only Dominique Strauss-Kahn who supported Turkey and spoke out in favour of a more differential Europe.

Laurent Fabius’ similar proposal considered some countries comprising a ‘core Europe’, and the concept of ‘privileged partnership’. Ségolène Royal is the only leading candidate to have refused to publicly express an opinion, supporting simply the idea of a referendum. Her opinion, she says, will be ‘that of the French people.’ Who said ideological politics was dead?

Other proposals emanating from the candidates clearly criss-cross a wide range of issues. Royal’s declared determination to restore EU aid to the Palestinian Authority contrasted with Laurent Fabius’ proposal for a community-wide energy tax. The general criticism, however, particularly from the left, is that of a Union increasingly removed from its citizens and weak in the face of the liberalising forces of globalisation. The question of whether any candidate’s proposals will make a difference to either, however, remains as speculative as that of who will actually be sitting in the Elysée come next May. If one thing is sure, however, it is that Europe will have high expectations of the new French president - especially if history is created with the appointment of the first female head of state. Many will therefore be hoping that the best ideas are yet to come.