'The EU won’t fall from heaven'

From the Treaty of Rome to Erasmus. Ten stops on board 50 years of the EU train 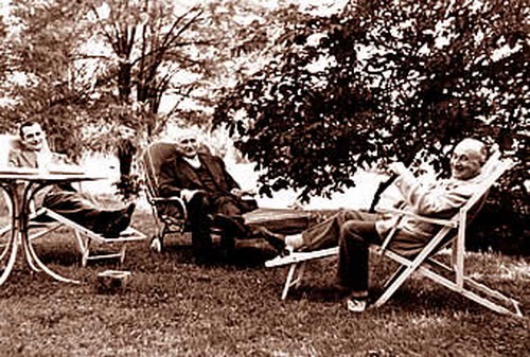 'Europe won’t fall out of heaven,' warned Altiero Spinelli, the Italian advocate of European federalism. 2007 marks not only the centenary of his birth but fifty years of the European Union. The latter has become the daily bread of many people, known and unknown, who are engaged in its construction day after day. Here are 10 of its landmark stages.

1950: Europe re-establishes itself through coal and steel 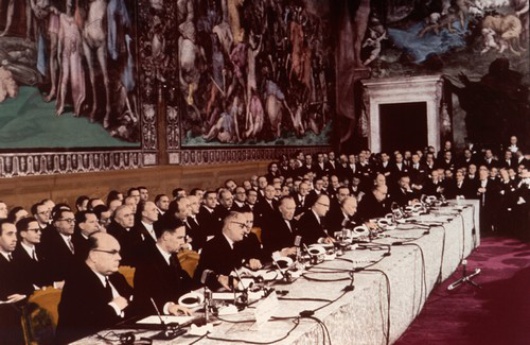 ‘Creating a 'de facto solidarity' between the enemies of yesterday by dividing the production of the primary materials of the war’. This was the idea behind the creation of the European Coal and Steel Community (ECSC) as proposed by the German-French Minister for Foreign Affairs and EU founder, Robert Schuman (in the middle of the photo) on May 9 1950. It was an idea by his right-hand man Jean Monnet (right) and proclaimed 'architect of European unity'. Franco-German reconciliation and European peace started from this point. 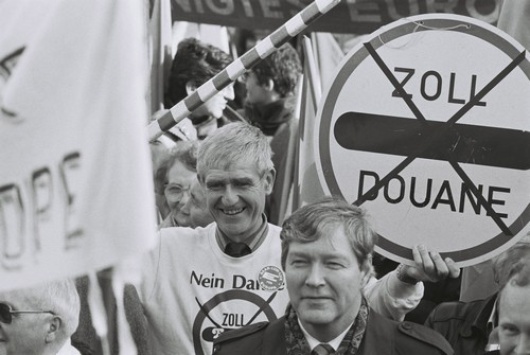 The European Defence Community (the EDC, which was not ratified in French parliament) in 1954 should have created a European army and a political government. After its failure, the Treaties of Rome were signed three years later on March 25. One was on the first full customs union, the European Economic Community (EEC or common market, and today's Maastricht treaty of 1992). The other was on the European Atomic Energy Community (EURATOM, founded alongside the EEC in 1957 and which still exists, but only on paper). The creation of supranational institutions to attain common objectives was a revolutionary decision.

But borders were only knocked down afterwards 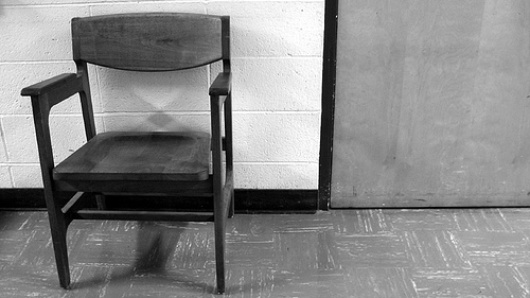 Demonstrators demanded the abolition of customs duties. The customs union should have come into effect in 1968, but the single market was only attained in 1993 (see 1995 entry). Economic integration was the main area of action for the European Union, and indeed its first pillar. 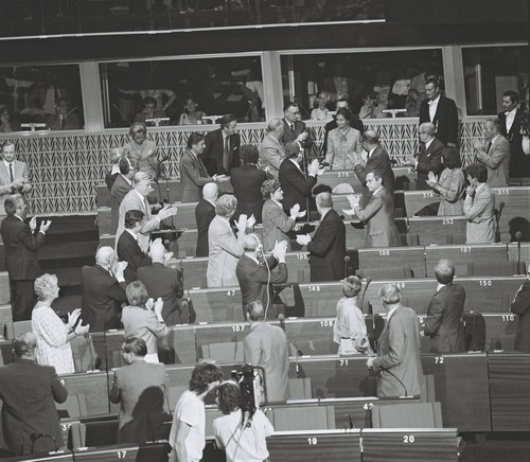 On June 30 1965, the former president and prime minister of the French republic, Charles de Gaulle, launched an ‘empty chair’ policy in reference to the financing of the Common Agricultural Policy amongst other things. France withdrew from European meetings as a sign of protest after being unable to reach an agreement. To defend the interests of French farmers, they opposed the principal of majority voting in the name of the 'Europe of Nations.' The stalemate was broken on June 29, 1966 with the Luxembourg Compromise which granted the right to veto matters which were judged as being essential. But European construction was to suffer from the repercussions of this for many years to come. 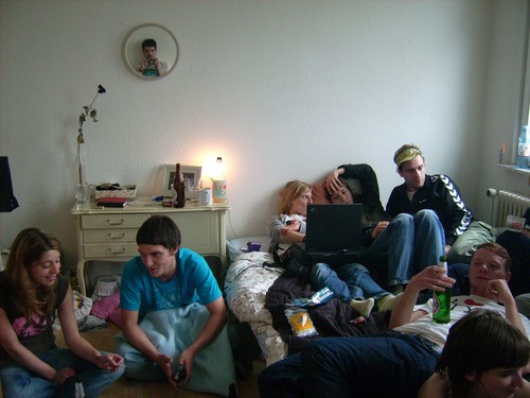 On July 20 1979, the French politician Simone Veil, famous in her homeland for having passed a law legalising abortion, was elected by universal suffrage as the first president of the European Parliament. Its powers were limited, but from a purely diplomatic entity, Europe had started to become a democracy. 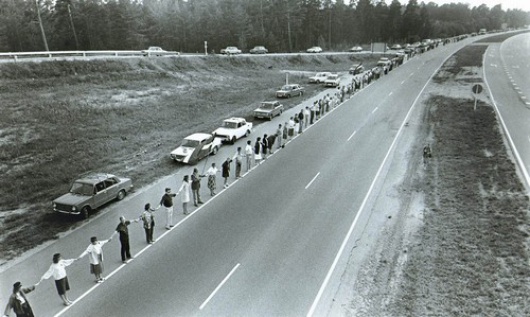 While political Europe was relaunched by the Commission led by Frenchman Jacques Delors, the exchange program between universities started up. To this day, more than one million students have been able to study in another European country.

1989: First shock for the Iron Curtain 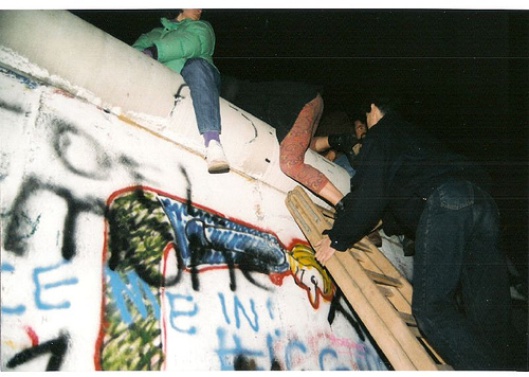 In the eighties, disputes increased in the Eastern bloc. In the photo: part of the long human chain which spread over 600km and crossed Latvia, Lithuania and Estonia on August 23 1989 as a protest against Soviet occupation. Watch the video of the human chain

And we all fall down 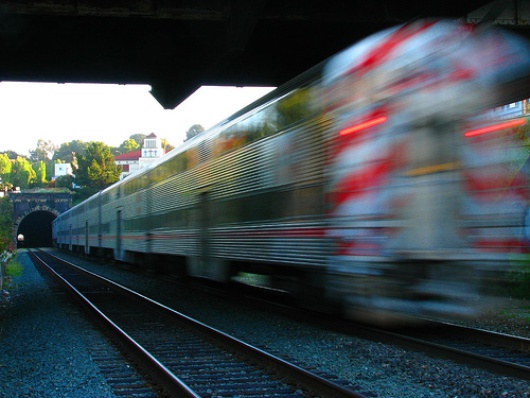 On November 9 1989, the Berlin Wall came down. East Berlin's inhabitants crossed the checkpoint without meeting any resistance. The symbol of the Iron Curtain which artificially separated Europe became history. But more than 15 years were needed before the ten countries of the Eastern Bloc became part of Europe, from 2004 to 2007. 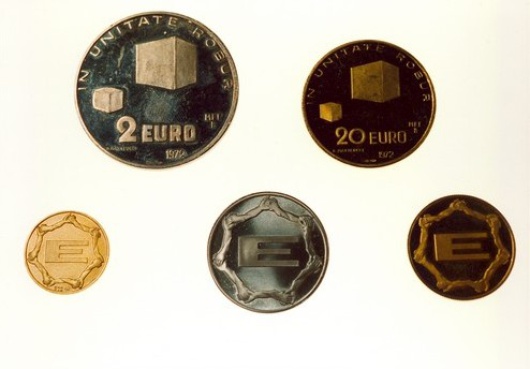 Inside the Schengen Zone, 15 European countries allow the Union's citizens to move around completely freely. The pivotal points of the single market are the free movement of people, goods and capital. 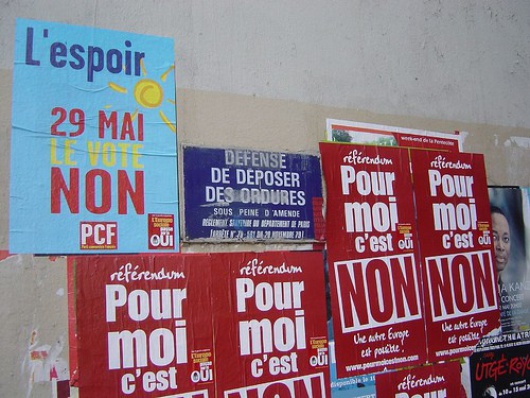 Started by the Maastricht Treaty in 1992, the Euro became reality on January 1, ten years later. Today it is the single currency of 13 of the 27 countries in the European Union. In the photo, a curiosity of the time: The Euro was minted in Bologna in 1972 by the European Federalist Movement, headed by Spinelli.

The French and Dutch marked Europe's recent history by voting 'no' to the treaty which aims to adopt a European constitution. 18 countries have ratified it, but the future (of both the treaty and European construction) remains uncertain.