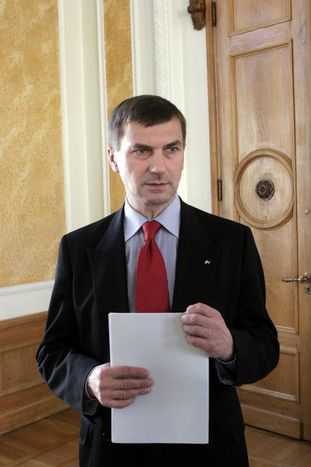 “We must demand the fulfilment of the six-point peace plan from Russia. We do have the ceasefire agreement, but Russia has not kept its promises. The Russian forces must withdraw to the positions they held prior to 7 August, and the so-called control points must be eliminated. Russian soldiers, who obviously are not peacekeepers, must be replaced with international peacekeepers”.

According to Ansip, the unilateral decision of Moscow to acknowledge the independence of South Ossetia and Abkhazia deserves condemnation by the European Union.

“We must ask our foreign ministers to think about how to substantiate our non-recognition policy with specific content,” said Ansip.

The Prime Minister called on his European colleagues to take fast steps to help Georgia. Last week, Ansip sent the respective proposals to the holder of the Presidency of the European Union, as well.

“First, we should immediately increase the humanitarian and financial aid given to Georgia. This aid must reach all regions of Georgia. Second, we should start negotiations with Georgia on the visa simplification agreement. Third, we should demonstrate readiness to negotiate the entry into a more in-depth free trade Agreement with Georgia. Fourth, we should organise a donor conference to help Georgia. Our final objective should be to help build up a Georgia that would be twice as successful and rich as before the conflict”.

When speaking about the relations of the European Union and Russia, Prime Minister Andrus Ansip said that he supports the continuation of political contacts with Russia. But he stressed that the relations cannot continue in the same manner as they have.

“Russia has not acted according to European values. This is the reason why we support the idea to stop the dialogues currently in progress with Russia, including negotiations on the new framework contract, the visa dialogue and the visa simplification agreement”.

Ansip also expressed his support to the proposal of the presidency to review the entire spectrum of the relations of Russia and the European Union.

“This work must be done as soon as possible,” Ansip stressed.

To end his speech, Prime Minister Andrus Ansip called on increasing the presence of the European Union in the region, including in Ukraine, strengthening the new neighbourhood policy and further developing the Eastern Partnership idea between Sweden and Poland.