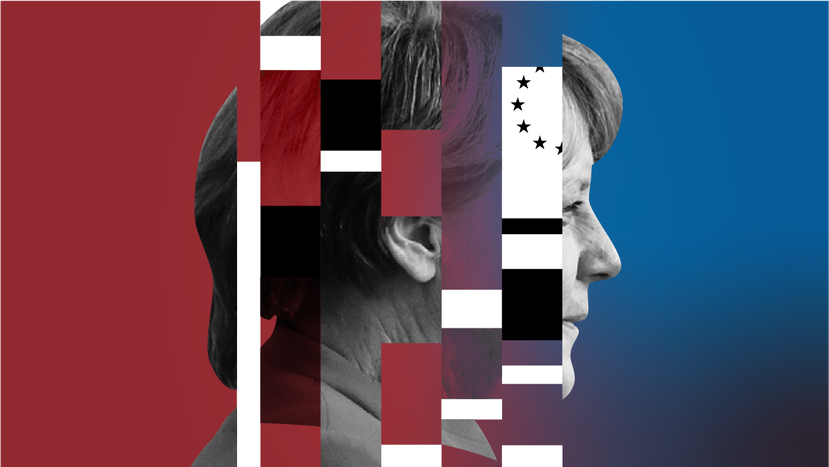 The end of an era: who is Angela Merkel?

On Sunday 26 September, Germany reached its most significant political crossroads since Angela Merkel was appointed chancellor in 2005. Elections to nominate her successor have now officially begun. “My Question to Angela Merkel”, a podcast co-produced by Cafèbabel and Bulle Media, takes you through Merkel's career, from her first campaigns to the present day. Listen to it here and read our summary below of what's at stake.

Angela Merkel is preparing to leave the scene after 16 years at the helm of Germany. Several figures are in the running to replace the calm, pragmatic, even placid leader that the German public nicknamed “Mutti” (mother). One, Olaf Scholz (SPD), is known for his lack of charisma. Another, Armin Laschet (CDU), for his apparent lack of empathy, and finally there's Annalena Baerbock (Greens), who has a reputation for being a cheater.

Reminder: How does the German voting system work?

Germany is composed of 16 Lander and 83 million people, and there are three steps to take before electing a new Chancellor.

First, the citizens go and vote for the figures they want to represent them. Then - on the same ballot but on a different page - they elect the list of the respective candidates’ parties. If both the list and its leading candidate obtain a large enough number of votes, they enter the Bundestag, the German federal parliament, where laws are proposed, debated, and voted on.

Fun fact: the Bundestag has capacity for over 700 Members of Parliament.

Once the MPs are elected and the lists chosen, they must decide among themselves who will be the next Chancellor. This is where the German election process addresses the question of the 'trustworthiness of the politicians.'

Unlike France, where citizens directly elect their President for the next five years, the German system prefers to give citizens the ability to elect a group of politicians who they in turn trust to choose the right leader for the whole country. This is a serious responsibility, as, according to a law from 1949, the Chancellor’s powers consist of “[giving] the political orientation of the country and [taking] responsibility for it.”

It's therefore important to create a powerful list, capable of establishing a majority coalition in the Bundestag: the larger the number of your party-mates and the bigger the size of the list(s) you’re associated with, the higher the probability of seeing your name next to the title of Chancellor.

The competition for the German Chancellery has been brutal this year. Now, two front-runners have emerged, which is having a disruptive impact on the possible outcome of the coalition-making-process.

Armin Laschet, Angela Merkel’s successor as the head of the CDU, hit a low in the polls after showing the world his best laughing face while visiting the victims of July’s floods - floods that killed around 190 people. Yet despite this, his party got close to the winning number of votes: 196.

Scholz represents the left-wing SPD, which has been struggling to succeed in elections since the early 2000s. This sudden comeback allows them to potentially fill the huge hole left by the CDU / CSU alliance that has led the country for 16 years with Angela Merkel at its head. The last time the SPD was in power was in the late 90s, shortly after the fall of the Berlin Wall, when Helmut Kohl reluctantly passed the baton to Gerhard Schröder.

One plan for Scholz to keep control, and to outflank the Christian Democratic Union, would be to ally with the FDP (Free Democratic Party, which hasn’t been anywhere near power since 1974) and the Greens. Annalena Baerbock's party, which did not live up to expectations, reached 14% of the votes, winning 118 seats. This result puts them third on the list of the most influential political parties in the German federal parliament.

What size are the shoes they have to fill?

Tremendous. Angela Merkel got to the highest spot in German politics by being smart, discrete and straightforward at the same time. She played it funny, she played it strong, she played it sneaky. She also proved herself on the international stage, climbing the ranks of the EU to the point of becoming its unpronounced leader. Her recent role as power-broker in approving the Covid-19 recovery plan is enough to demonstrate the authority she awarded Germany on the European stage.

She fought every battle of the 21st Century, from the Lehman Brothers’ crisis to the question of nuclear power. She talked to every leader from both Eastern and Western Europe and either made them like her, or at least respect her. This includes Viktor Orbán, with whom she nourished a very specific relationship. Given that Merkel was born in Eastern Germany, but also because so many German-car-makers were and are based in Hungary, she closed her eyes to a certain amount of antidemocratic behaviours (like in 2015 when he launched an anti-migration campaign, sending millions of 18-page-leaflets to Hungarian citizens urging them to vote “no” to in his referendum addressing the European Relocation deal).

Assessing Angela Merkel’s journey is a long, complex task. That's why, here at Cafébabel, we've decided to help our readers evaluate her legacy, and better understand how she got where she did by co-producing a podcast with Bulle Media, “My Question to Angela Merkel”. You can listen as our fictional journalist Emilia rebuilds Angela Merkel’s life and career. She interviews Merkologists such as the eminent Jacqueline Boysen, Joyce Mushaben, Florence Autret and Judy Dempsey; and well-known political figures from around the world such as Alexis Tsipras, Jean-Claude Juncker, François Hollande and Michèle Alliot-Marie (and all the interviews are real).

“My Question to Angela Merkel” is available to stream here.