All across Europe, dissatisfied citizens are taking to the streets in greater and greater numbers, protesting everything from Brexit to Poland's new abortion laws to the loi travail in France. I joined a march in Paris to find out what keeps die-hard protestors diving back into the tear gas and riot cops.

Walking towards a mass of thousands of people, most of whom have disguised their identity with swimming goggles and scarves wrapped around their faces, would make any newcomer to the Parisian protests feel a tug of hesitation. Nonetheless, I joined the most recent demonstration over the controversial loi travail as an observer, trying to understand the phenomenon that had been blowing up my news feed over the last few months.

Advancing slowly to join the crowd, it’s striking to see how diverse the protestors are. People of all ages and all social strata unified, supposedly, to contend the labour reforms. But the diversity suddenly became blurred the closer I got to the heart of the protest. Women, children and trapped tourists were quickly outnumbered by die-hard protestors and the omnipresent mass of armed police. Banners disappeared, and I was lost in a sea of teargas, goggles, shouting, and sudden bursts of rushing protestors.

Attempts to lump all protestors in France into one of two categories - the die-hard ‘casseurs’ or ‘black bloc’ and the pacifists - make it easy to lose sight of individuals' motivations for protesting. However, being immersed in a setting of constant opposition, I felt as though something much deeper was at play. It dawned on me when I heard a passerby yell: "quand la manif vient à toi, tu ne peux pas la refuser!" ("when the protest calls you, you can’t refuse!").

Rather than trying to separate the overzealous protestors from the pacifists and shifting the debate to themes of violence, it is important to reach below the surface and ask ourselves why people are taking part in these protests. The words shouted by my gallant passerby made it apparent that there was an aspect of temptation, a difficulty to say no to a protest. Regardless of his potential grievances, he was there to be part of something bigger. Can protesting become an addictive experience? If so, where is the kick?

The beginnings of an adrenaline habit 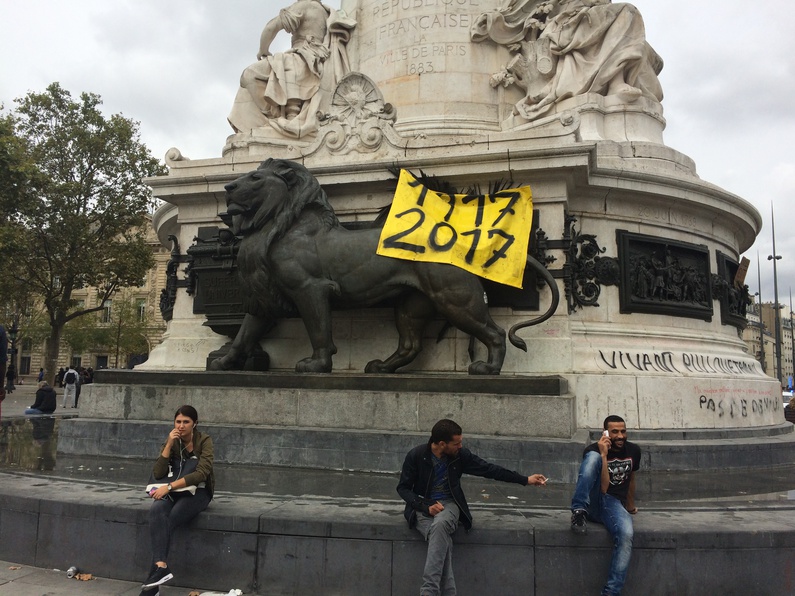 Surely there are historical routines that are at play here. The act of protesting has been a cultural heritage here in France ever since the Revolution. Notice how protests also naturally gravitate towards the Place de la République… if that isn’t a sign of eternal recurrence, then I don’t know what is. But however these outbursts progress and develop over time, whatever the cause, there are underlying motivations that fuel a kind of obsession with protesting.

Naturally, there is an adrenaline rush that comes with protesting. I would be lying if I said I was unaware of my own heart pounding in my ears I approached the cortège. Immersing ourselves in something chaotic that can quickly turn violent and dangerous is, to an extent, comparable to surfing big waves or skydiving. Although the sensation is self-induced, it feeds off of our innate "fight or flight" instincts and has the ability to make us all adrenaline junkies.

Running to find shelter in the entrance of a shuttered pharmacy on the Boulevard du Temple, a protestor asked me whether I was there as an observer or a participant. I mentioned that I was just observing, and his eyes widened as he warned me - in an almost patronising tone - that I should leave within the next half hour, as things "tend to get violent". I smiled, but toyed with the idea of leaving. And I did shortly after, but only to go home, drop off my computer, and buy some beers. On my way back to the protest, I crossed my usual friendly neighbours playing pétanque next to the Buttes Chaumont park. "What a divide," I thought to myself, and waltzed back into the verve of police clashes, the loud banging of tear gas canisters, and the swarm of people.

On a much lighter note, this temptation to protest can manifest itself into something quite remarkable as well. Again and again I saw the strength of compassion between protestors, passing each other saline solutions to help soothe the effects of teargas, or warning one another when things got too heated. Perhaps taking the time to be passionate with those around us is not a significant part of our everyday lives. During a protest, however, there is a powerful sense of community that outweighs the differences that may separate us from each other in our daily routines. Moments like these can be a lure to find communitas in an age where we can so easily dislocate ourselves from our surroundings. Although I was warned to be cautious of how quickly protests can escalate, and my reaction was to seek the borders of danger because I was so pumped with adrenaline, the fact that someone was looking out for me "just because" was quite remarkable.

"We take to the streets to be seen" 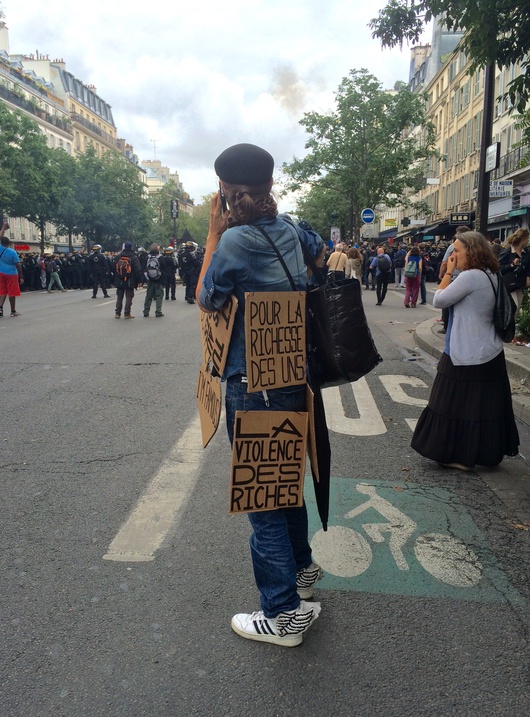 It was also striking to see the media’s involvement. It was difficult to distinguish some journalists from other protestors, but my instinct told me that the people with monstrous cameras and microphones were there to report. What I found was that many of those armed with gear would gravitate towards areas of friction, where the crowd is denser and the police more numerous. Like Narcissus, but drawn to my 'badassery' rather than my looks, the cameras and media coverage made my involvement in the protest feel important. We protest to fight for a cause, but deep down, we take to the streets to be seen.

When the clashes settled down, and the CRS police in their Ninja Turtle uniforms had broken up the main body of protestors, I decided to make my retreat. I suddenly felt intensely out of place, being told to move along. My role as an observer in the theatre of protest had ended. Sitting by the Canal St Martin, where many other protestors were buzzing about events of the day, discussing whether they thought the protest was a success whilst others were recounting their personal experiences, I tried to gather my thoughts.

The whole experience was a sensory overload. What we forget when seeing a protest from our screens is that we are only digesting the visual dimension. We don’t experience the smells, the noise of tear gas canisters exploding, the sensation of that smoke stinging your eyes, the effervescence of the people around us. The 15 September protest on the loi travail was my first real experience of a protest. It won’t be my last.