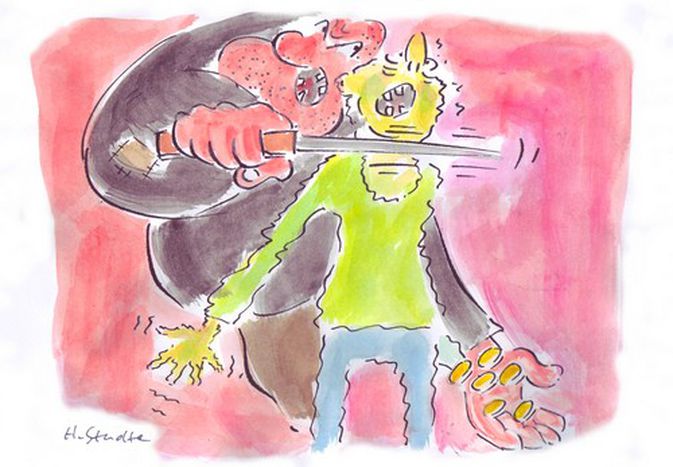 Shylock, Shakespeare’s king of profiteers, demanded a pound of flesh from his debtor and archrival Antonio. Should he not be in the position to pay back the money on time, Antonio’s heart was deemed suitable payment. A halsabschneiderischer Hund, or a cut-throat dog was the title earned by Shylock even before the ominous clause in the contract had been drawn up, as he was notorious amongst businessmen in Venice for his exorbitant interest rates.

The Germans and English are united on one thing: he who demands an inflated price for a something is a Halsabschneider, or cut throat. The French compare their brand of profiteers with sharks, a requin de la finance, whilst for Italians they are cravattaio or tie-makers.

Exorbitantly-priced products are known as sauteuer in Germany, to sündteuer in Austria, whilst the French expression prix exorbitant literally translates as prices out of orbit. For the Polish contingent, it is as expensive as cholera (to jest drogie jak cholera). This expression finds an echo in Hungarian, where such goods may be described as expensive as poison (méregdrága). In England, rip-off merchants operate, a slang expression based on the verb ‘to rip’, or steal something.

Back to Shakespeare’s Shylock. Antonio would have been taken for a ride (übers Ohr gehauen) for the Germans, or if you like, literally rolled in flour (rouler dans la farine) for the French.