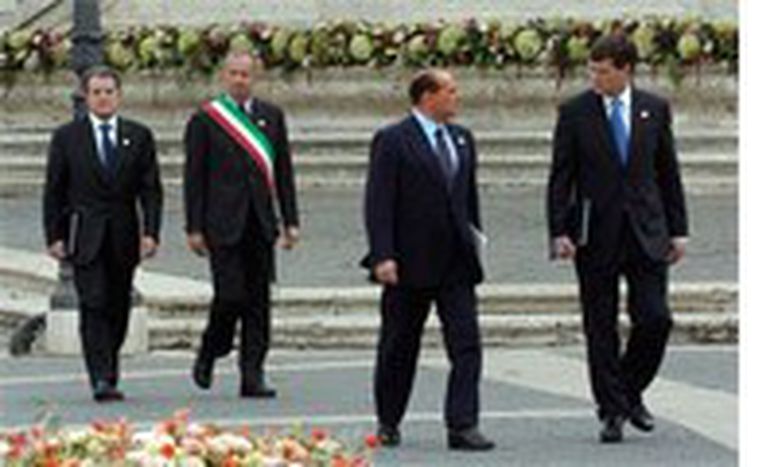 The constitutional warm-up is over

The signing of the European Constitutional Treaty in Rome on October 29 is only the first step on a long and treacherous journey fraught by obstacles including referenda, the outcome of which is anything but clear.

It may seem that the signing of the constitutional treaty today in Rome is the symbolic culmination of the ‘European dream’, the cultural and political model of the Old Continent alluded to in the American sociologist Jeremy Rifkin’s latest best seller. But in reality, the new treaty just rearranges the current situation and its difficulties, which will only become more complicated further down the road to ratification. These problems are symptomatic of the political crisis affecting the European Union, a crisis which is at risk of becoming irreversible.

The Nice Treaty, which currently governs the institutional structure of Europe and which was already experiencing problems in a Union of 15 countries, is absolutely inadequate to guarantee the political survival of an organisation which now has 25 members. If the constitution is not passed (and refusal by one country alone would be enough for this to happen), the political repercussions will be enormous and could even push many to embrace the ‘every man for himself’ philosophy.

Following deep divisions over the war in Iraq and poor participation in the most recent European Parliament elections, an ill wind is blowing across Europe. In this chilly climate, 10 European countries, riding the wave of debate and controversy generated during the European Convention (which drew up the constitution) and the Intergovernmental Conference, have decided to call referenda on the ratification of the treaty. Such referenda could turn out to be real time bombs for the constitution. In Great Britain the Eurosceptic majority, led both by the official opposition and the influential publication The Economist, want to exploit this opportunity to sacrifice Tony Blair once and for all at the altar of one of his supposed strong points, Europeanism.

The situation in France is no less risky. President Chirac, having fared poorly in the most recent elections, has promised a referendum in the knowledge that the Left, which is otherwise improving, would be split over this issue. The complexities of the political debate regarding Turkish membership of the EU risk complicating a situation where the outcome is already extremely uncertain. French refusal, which was avoided in a completely different climate only by a hair’s breath in 1992 over the Maastricht Treaty, would create an unprecedented crisis in the heart of Europe. The same can be said for Ireland and Denmark, countries which have a reputation for refusing treaties and which still have strong Eurosceptic currents. If ratification is unsuccessful, it will be more difficult than before to ask citizens to vote again as was done in the past. However, the situation is more positive in the other countries which have decided to call their citizens to the ballot box. Approval of the treaty should be relatively straightforward in Spain, Portugal, and the Czech Republic, as well as the Benelux.

And Italy? In one of the most Europhile nations ratification through referendum (initially popular) would have required cumbersome reform of the constitution. The parliamentary route which has been chosen, and which is undoubtedly quicker, will allow Italy to be one of the first to ratify the new treaty, probably by December. This is a reflection of a clear, and hopefully well-intentioned, political sense of timing which has nevertheless limited broad national debate.

The European constitution therefore has truly difficult months, or even years, ahead of it. The position of those deluded Europhiles who hope refusal of this treaty will lead to the creation of a better one is suicidal. If this treaty does not get through there will be no others to follow it. The section of Europe's ruling class that only considers the extremely delicate issue of ratification in terms of internal politics is demonstrating that it does not understand how high the stakes are. Indeed, they have never been higher than they are today.

Published October 29 2004 in the section Caffeine