The 'Coca-colonisation' of European culture

American cultural hegemony has resulted in feelings of resentment in Europe towards her old protégé. But then why does Europe continue to embrace American goods? 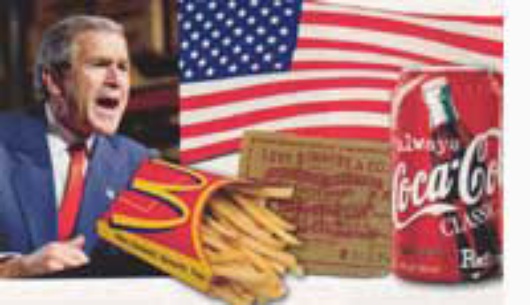 In his 1881 novel, Portrait of a Lady, American expatriate author Henry James analyses the then cultural differences between Europe and America. Europe, represented by Gilbert Osmond, an American brought up in Italy, has been corrupted by the money and nobility of the continent. Youthful America, by contrast, is portrayed through James’ female protagonist, Isabel Archer, as proud, independent and yet apparently subservient to Europe’s excesses. Their relationship is unhappy and fractious due largely to the cultural differences that exist between the two continents.

One hundred and twenty years later, America is now the dominant partner in this geopolitical marriage, but does the cultural dominance of the USA lead twenty-first century Europeans to harbour feelings of resentment manifested in anti-Americanism?

When the abovementioned novel was written, America, whilst being seen as the ‘land of opportunity’, was still subordinate to the influence of European culture. Nowadays the balance of power is completely the opposite, for it is the ‘Old World’ of Europe that has been, and continues to be, culturally distorted by its younger, more powerful cousin. Since the manufacturing boom in the 1920s and the pursuit of the American Dream, U.S cultural exports have dominated not just European, but World civilisation. The reason for this is simple: money.

The U.S. is not only the world’s biggest consumer but its biggest producer and consequently is home to most of the World’s richest companies. The figures involved are quite staggering. For example, Motor Companies such as Ford and General Motors generate larger annual sales than the collective GDP of sub-Saharan Africa.(1) With profits come the ability to embrace new markets, and hence the products and cultural symbols associated with them become entrenched in the everyday lives of those outside the United States.

This is seen in Europe. If you take a walk down any street in any European city you will be surrounded, from the Visa Card in your pocket to the McDonalds burger in your hands, by American brand culture. Vast amounts of our television, music, the clothes we wear and the computer software we use are all imported from the US, as are the American-English slogans of thousands of powerful brands. This is reflected in our language, which is incorporating more and more ‘Americanisms’ such as ‘acheter un Cheeseburger’ in Paris and ‘dricka en Milkshake’ in Stockholm. Although bodies such as l’académie française have attempted to stem this cultural influx (suggesting, for example, the term 'baladeur' in place of ‘Walkman’) and the French government has passed a law ensuring that a large percentage of French language music is played on the radio, it is impossible to fight against the all powerful American cultural idiom.

Although American culture is ubiquitous in today’s Europe, it is not this alone that causes Europeans to feel a degree of antipathy towards American products and culture – indeed such imports enrich our daily lives. Rather, anti-American sentiments in Europe stem from the fact that the cultural ‘exchange’ with the USA is far from reciprocal. Whilst American culture infiltrates European lives at almost every level, our American cousins - because they are so powerful - can remain self-sufficient and simply do not need to embrace European culture. History informs us of how such dominance breeds resentment, as illustrated by past feelings towards the Ancient Romans, the Napoleonic regime and, more recently, British Colonialism. The cultural hegemony of America, or ‘Coca-Colonisation’ of European culture in today’s lexicon, perhaps explains European hostility towards America.

Whilst it can be said that America’s culturally isolationist approach is particularly strong when there is a leader like Bush in the White House, it is not just a product of recent years. Indeed, it can be traced back, at least, to the policy of ‘Rugged Individualism’ pursued by Herbert Hoover, President of the US between 1929 and 1933. Consequently, current anti-Americanism in Europe cannot be blamed solely on America’s influence on recent cultural developments. Moreover, America’s isolationism is not just limited to popular culture, but is more of a mindset that can be extended, by analogy, to the current US administration’s disregard for the will of the United Nations and its refusal to ratify the Kyoto agreement.

A Marriage of Convenience

Ultimately, Europe’s perception of American culture is paradoxical – we all enjoy the benefits and pleasure it can bring to our daily lives, but if we are too embracing of it then we do so to the detriment of our own latitude, history and traditions. Like James’ heroine, whilst it may often seem that Europe would do better to flee and distance herself from this unequal relationship, it is felt that she will always, no matter how unhappily, have to bow to the will of her dominant partner and stay bound into a 'marriage of convenience’.

(1)These figures were taken from Noreena Hertz, 'The Silent Takeover. Global Capitalism and the Death of Democracy'