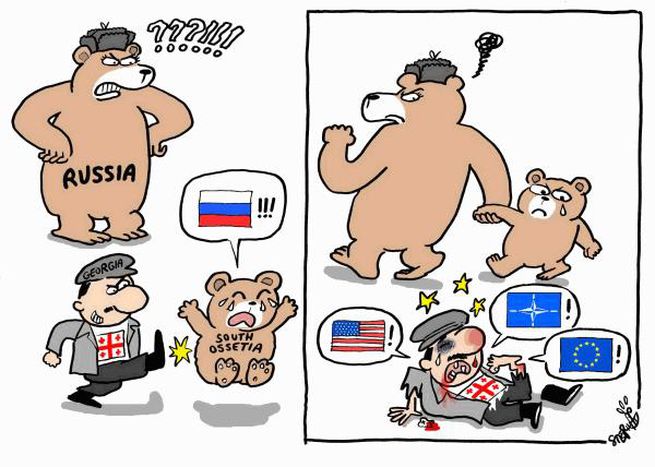 Blogospheres are vibrating in the aftermath of the war in the Caucasus. The need to understand and debate is huge, as spin doctors have been manipulating the news on both sides

Russia may have won the actual combat which broke out on 7 August without any difficulties, but Georgia was much more successful when it comes to information warfare, argues the German blog Der Spiegelfechter (‘The mirror swordsman’). Blogger Jens Berger comments on the European flag, which hung behind Georgian president Mikheil Saakashvili when he gave official television announcements.

Conversely the cafebabel.com team in Strasbourg has spotted Georgian flags in the heart of Europe.  Witness the French-Georgian point of view on their babelblog and read a chronology of the events leading to war.

But ‘who would have made a great effort to protect Georgia,’ asks Jean-Sébastien Lefebvre on his French babelblogNo Way. It is no surprise that America, NATO or the EU have not further supported the Georgian case, he argues.

Italian babelblogger Giovanni Angioni received numerous comments on his article about the likeliness of a Russian invasion in Estonia (a country with a large Russian-speaking ethnic minority). The posts show that some citizens do not feel sufficiently protected by EU and NATO membership in central and eastern Europe. The cafebabel.com team in Tallinn has organised a debate on the subject with journalists from the biggest Estonian daily Postimees. The newspaper published a colourful map in mid-August, explaining Russia’s military strategy attacking Estonia.

NATO and EU inaction is also the reason why Pawel Lisicki, a Polish journalist of the fairly conservative newspaper Rzeczpospolita, evokes the idea of a new defense union on his blog. EU countries which are former member states of the Warsaw Pact should intensify their cooperation because they share the ‘memories of communist oppression’, as Polish president Lech Kaczynski stated in Tbilisi, where he appeared alongside three other central-eastern European presidents in a show of solidarity on 12 August.

Lastly, babelblog A Glance at Estonia presents the bespectacled Helga, who gives the Russian point of view on the conflict, alongside many links and other video footage. She argues that the only solution to stop the tragedy that has been going on since 1991 is independence for South Ossetia and Abkhazia