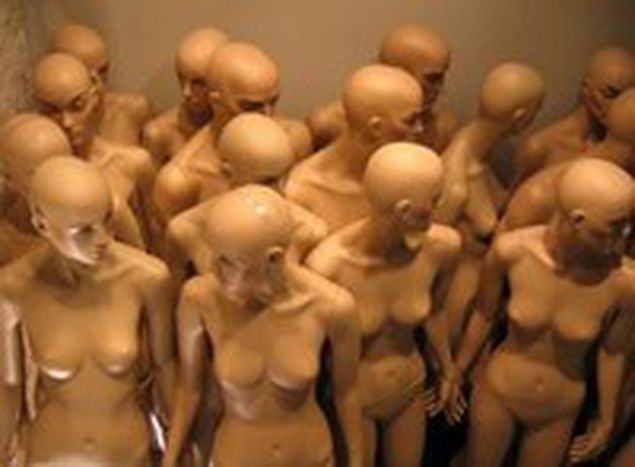 The Barbarians invade the podium

Whether they are Czechs, Ukrainians or Bulgarians, it's the girls from the East whose delicate figures and cheaper rates dominate the world of fashion

“Look me in the eyes. I said the eyes.” It all started in 1992 with Eva Herzigova’s mischievous behest for Wonderbra's international advertising campaign. Besides making men around the whole world fantasise about her enhanced cleavage, the Czech paved the way for other girls from the East. Now amongst the top ten best paid models in the world, she also features in the Pirelli calendar, has a rock star marriage and has made her first steps as an actress. Her career has been emulated ever since.

Ukranian Milla Jovovich, Slovakian Adriana Sklenarikova and Russian Natalia Vodianova are just a few who have bolstered the ranks of Eastern Europeans taking their place in the glitzy heights of the fashion world. If these girls have now "retired" from modelling careers on the podium, they certainly knew how to play on their feline appearance and their ephemeral charms. Jovovich played lead roles in several big films such as The Fifth Element before diving into the jungle of the Hollywood party scene. More wisely, Miss Vodianova, just over 20 years old, the darling of stylists and fashion editors, has just married an aristocrat and given birth to their second child. But for all these Cinderella stories, how many single tickets are there back to anonymity?

The invasion of the hordes from the East continues, though smear campaigns suggest the only thing that makes these girls unusual is their banal faces that thanks to a bit of makeup can be modelled at will. These smear campaigns reflects an envy of a particular type of beauty.

So what is the key to this look? Light coloured eyes and hair, full lips and high cheekbones. It is the way they look naturally that works so well. However, it is difficult to speak of a “Slavic look” because according to the stereotype, the Czechs are often more curvy than Polish girls with their stick insect like figures. According to Hugo Santo, booker at the Marilyn agency, “Eastern girls are very in. People like their delicateness and long legs.”

In truth, the names of most of these girls do not say a great deal to the general public, even if nearly everyone knows their faces. Gucci, Dior, the cover of US Vogue, perfume adverts or fashion shows...the bombshells from the East are everywhere.

Without, that is, being noticed. Some experts point to the fact that by employing girls from Eastern Europe, submissive and at the mercy of unscrupulous taskmasters required to fulfil the day’s forced labour, model agencies escape from the whims of divas and increase their margins by reducing payroll costs.

The strange thing about all this is that a large number of these girls would never have had the least interest in a career in modelling had they not crossed the border. Malgosia Bela, new favourite at Calvin Klein, is a Pole with androgynous looks who was rejected by several model agencies in Warsaw. Three months after moving to New York, she signed an exclusive contract with Jil Sander and since then her face has made the cover of Vogue seven times.

Modelling is one of the most fantasised jobs of the moment. Nevertheless the life of a model is not just about money, glamour and travel. Even among the elite agencies, reports have revealed shabby, backstage conditions. They chronicle drugs, sexual abuse and anorexia. Models that start their careers as kids at the age of 13 or 14 sometimes pay over the odds for their dreams of glory. An ignorance of the language of the country where they are staying increases the mental exhaustion caused by the distance separating them from home.

According to experts, young Slav girls are "more professional" than others. They work hard and seriously, wanting absolutely to succeed in their career. In an interview in the French newspaper, Libération, Cyril Brulé, boss of the Viva Agency in Paris, stressed the fact that these girls are above all "ready for anything" - losing weight, sleeping with people - because it is not so easy to get into the industry. Once your in, a lot depends on the industry. Lenka Johova, who set up her own agency in Prague has the much in demand Hana Soukupova on her books and stresses the importance of the agent. “All models are pretty and thin, so much so that their success depends on their agent.”