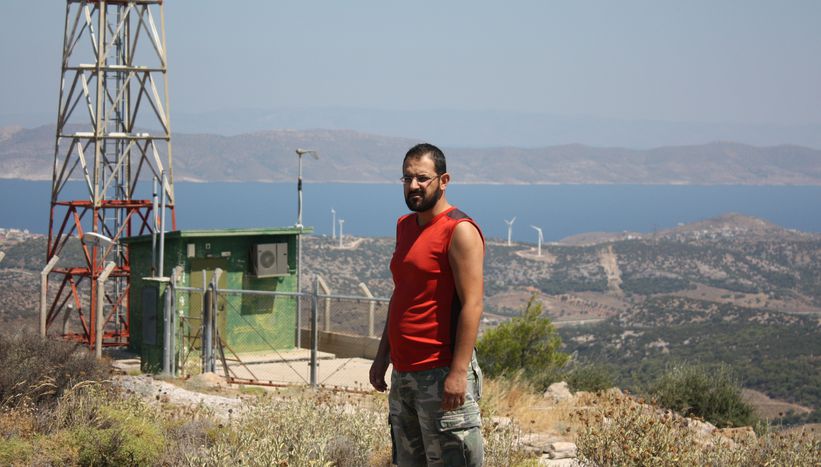 The attican landfill war: a load of trash?

Busy saving Greek myths, Europe has closed her eyes to another crisis, an ecological disaster now fifteen years old. Athens has more rubbish than places to put it.

The towns Keratea and Grammatiko have been chosen to host new landfill sites – a decision which has driven the people of Keratea, a town of 14,000 to the east of Athens, onto the streets in protest, where they will stay until they have chased away the state

‘Can you see the ashes? That’s what’s left of three burning bulldozers and a lorry. That was the night of our victory.’ Even in summer sandals and a vest, Kostas Antoniu still has the appearance of a warrior. He is the guard of the Ovriocastro mountain, which dominates the valley and which was chosen in 1996 to be the site of an enormous rubbish tip. ‘There were about 35 of them, they climbed up there by foot on a snowy night, while the policemen kept warm in their cars.’ Kostas was not one of the group, having always preferred other methods, starting a blog for example in 2008. He does seem proud of the action though, and of all other victories. These include the ‘new Molotov-mix’ used by his fellow citizens during the most brutal clashes with police from 29 March to 14 April. The ‘war’ lasted 128 days from 11 December 2010 till 18 April 2011, at which point the inhabitants of Keratea finally released the main road linking Athens with the Laurion harbour.

Why the opposition? Keratea became a model for the protestors of Syntagma Square, and for a good chunk of the public opposed to Greece's ‘illegal politics’, to borrow the expression from documentary Debtocracy. Standing at the peak of Ovriocastro, surrounded by a breath-taking panorama on all sides, Kostas lists all the arguments against the landfill site: ‘Building the rubbish tip here would be illegal, as it violates four directives and two rules: as well as a river and a protected wood, there are silver mines here which still contain toxic waste and the area also has some inhabitants. On top of that two provisions have declared this area to be an archeological site and therefore protected.’

The Greek government, threatened with European sanctions, has nevertheless attempted to push on with the project (dating from 1996) developing three depots necessary for the disposal of 2.3 million tonnes of rubbish produced in the region of Attica. 1.8 million tonnes currently go to the old disposal site in Fyli (now in the process of being modernized), while the new site in Grammatiko is now 40 percent ready. The government is taking its time with Keratea however, claiming that it wants to find a compromise with the population. ‘The one and only aim of this project is to give the EU a quick answer,’ explains Nikos Chrysogelos, future representative of the Greek green party in the European parliament. ‘We don’t have any strategy to improve recycling, to start an organic waste composting programme or to adopt more environmentally friendly technologies.’ Greece is lagging badly behind other European countries; it recycles 10 percent of rubbish against a European average of 53 percent and hundreds of illegal landfill sites are scattered throughout the country.

Couch potatoes and the mayor protest

'Everyone went out onto the streets within twenty minutes. Even the people who had spent their lives in front of the TV'

Despite this everything heads in the direction of the incinerator, due to pressure from big industrial groups which have always collaborated with the government. ‘Have you heard of Bobolas?’ asks Sotiris Iatrou, former town councilor and leader of the movement against the rubbish dump in Keratea. ‘He’s like Berlusconi in Italy, with the single difference that he didn’t go into politics. He wins all kinds of construction contracts.’ A fairly typical story from the mediterranean tabloids, we might think, if it weren’t for the fact that such stories are driving people to rebellion in a time of economic and political crisis. ‘On the 11 December, everyone went out onto the streets within twenty minutes of thousands of policemen arriving in Keratea. Even the people who until that moment had spent their lives on the sofa in front of the television,’ Kostas tells me.

Indeed, even the mayor, Vassilis Thiveos, was there; the representative of the conservative 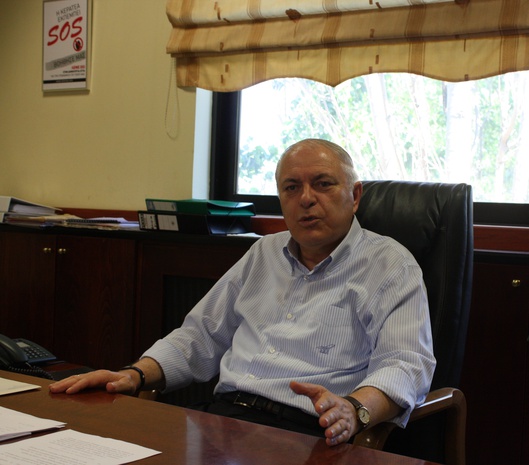 party ‘new democracy’ was ‘suddenly united with the leaders of anarchist parties and the extreme left-wing’, as he puts it, laughing. He shows me a photograph of himself, accompanying the elderly Manolis Glezos, the hero who managed to remove the swastika from the Acropolis in 1942. ‘We’ve made a different proposition which aims to be a model for the whole region. We want to dispose of the rubbish which is produced exclusively by the local community, produce our own energy and new materials through composting and recovery of biomass. The government will have to give its consent, because otherwise the people will return to Ovriocastro to protect the mountain.'

‘Keratea’s revolt is a classic example of the NIMBY(‘not in my backyard’ – ed.) effect, which overcomes any remaining trust in the – now powerless – institutions,’ explains Nikos Raptis, political scientist and director of the online revue ppol.gr, as we sit in a chic bar in the Exarchia quarter where he has just presented a book by a young intellectual. ‘The proposal of the three landfill sites was formulated as a result of studies by the polytechnic school in Athens, but even technicians can feel influenced by political pressure and this is why people lose trust. During the uprising, the community of Keratea identified itself as the victim of a corrupt and arbitrary power.’

If the economic crisis is strong enough to mask the ecological crisis, the latter is nonetheless preferred by a discredited politics no longer in the position to make decisions. It is precisely because of this that the inhabitants of Keratea remain cautious: ‘The supreme court, which is monitored by the government, could say the government is in the right and the police would step in again,’ Kostas confirms disconsolately. ‘It seems hard to bring all of Greece back onto our side at this stage.’ 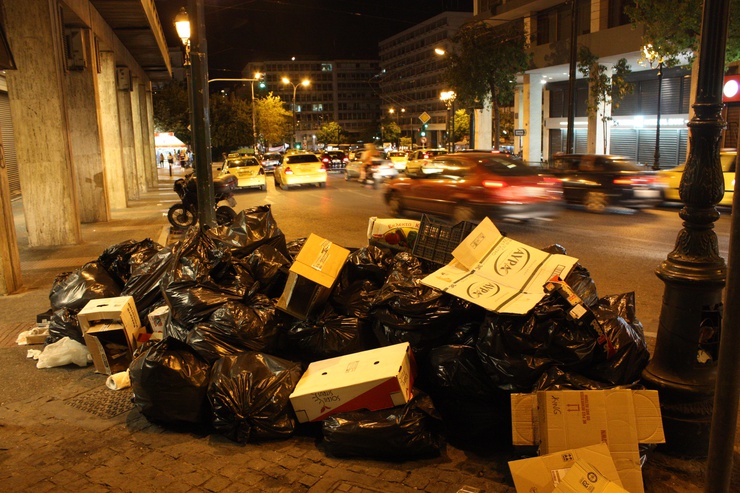 The rubbish does of course have to go somewhere: many islands near Athens are overflowing with plastic bags which end up in the sea. A pilot project to fish the bags out is soon to be started by the European commissar Maria Damanaki. The aim is to subsidise fishermen to fetch the rubbish out of the sea. Meanwhile, the wasteland surrounding the landfill site in Fyli is an environmental disaster. ‘There could be a quicker and more economical temporary solution,’ explains Crysogelos. ‘We could create two composting centres in Grammatiko and Keratea, each for 700,000 tonnes of organic waste, so as to reduce the pressure on Fyli with its 2.3 million tonnes of waste. But people need to collaborate onsite – we don’t have time for ten years of long studies and preparations.’ In Keratea it is back to the barricades: ‘If the landfill site is built,’ concludes Kostas Antonui, ‘we will protest for it to be shut down. We are fighting against injustice.’