The aftermath of Trump through Italian eyes

Three weeks after Donald Trump's victory we are somewhat getting used to the idea, to a certain extent, of him being president. What can we expect from the coming four years? We spoke to Nadia Urbinati, a political scientist and professor at Columbia University in New York, to find out more.

cafébabel: Let's start with the famous photo of Trump and Farage reportedly celebrating their victories against the elite. How can two white men in a golden palace present themselves as a credible alternative to the elite?

Nadia Urbinati: Let's not confuse the fact that, during his campaign, Trump only attacked the political elite. He never questioned the elite in general, especially not the economic elite. But this is how populist propaganda works. Once a populist is elected, he becomes part of the establishment he criticised.

And this is exactly what Donald Trump will do. Every populist promises to form an anti-elite government, to contrast the status quo. However, that's nearly impossible to put into practice. All it is is election propaganda, and lasts the duration of the campaign. It's vital to distinguish between populism as a movement, and populism manifested in a powerful figure. 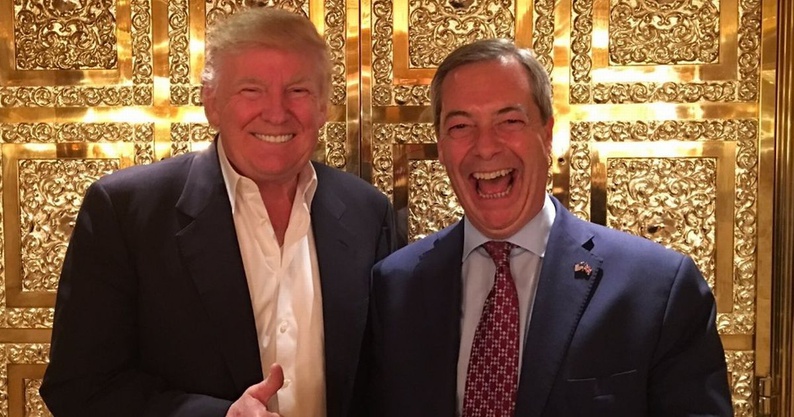 cafébabel: How will US-Russian relations change and how will the international power structure be affected? In other words, how will a man with little to no political experience deal with an experienced politician like Putin?

Nadia Urbinati: It would be best if the relationship between the US and Russia improved, especially in relation to the Middle East, as the collaboration between these two countries seems to be the only short-term solution. Learning by doing isn't impossible in politics. Even Silvio Berlusconi in Italy had no experience when he was elected. But he did learn, and stuck around for a while... That being said, Trump will have the Republican party on his side. I don't know how his personal relationship with Putin will evolve, but he definitely won't be alone.

cafébabel: How realistic is the comparison between Trump and Berlusconi? What are the similarities and differences between the two?

Nadia Urbinati: The American press has often drawn a comparison, and they are similar in terms of wealth and attitude, but they are different personalities. Both went into politics being rich and famous, with the goal of securing their own economic interests. Apart from that, though, there are some major differences.

Berlusconi never embraced violent rhetoric; he was more of a joker. He had the bravado of a self-made man coming from humble beginnings, and always presented himself as such in politics. Trump, on the other hand, is an 'insider' coming from a well-off family and is purely arrogant, violent, and rude. He is willing to say and do some questionable things in order to get his way. His company allowed him to reach a tyrannical sense of power, but in being a business man, he is also used to negotiating and compromising.

cafébabel: Will a Trump presidency bring back the nuclear option, for example against terrorism?

Nadia Urbinati: Wow. Nuclear menace against whom? Where? Terrorist organisations spread their tentacles everywhere, as we have learned the hard way. That particular remark by Trump was probably just pure propaganda. But if a terrorist attack happens on American soil, I do see the risk of Trump being sucked into a war he could not win. It would be, first and foremost, a war against rights and freedoms. It has happened before, during the Bush Jr administration, and with clear consequences.

cafébabel: In Europe, we find his denial of global warming difficult to digest. Does Trump really believe it is all a hoax?

Nadia Urbinati: The problem is that many see climate change and global warming as something that will happen in the future. In other words, it becomes a problem for a future generation and not one that is relevant now. I don't know what he personally believes, but his friends in the oil business definitely 'radicalised' him. Of course, the idea that we will never really experience global warming is short-sighted. However, Trump seems to be softening his stance on the matter since the campaign.

cafébabel: Why did some members of the LGBT community vote for Trump?

Nadia Urbinati: As a New Yorker, Trump is (to a certain extent) more liberal than many of his Republican compatriots. He does not belong to the Evangelic ultra-conservative and reactionary group that he exploited in order to win. Of course, the party will now play a key role as it has a majority in both houses and has two members appointed to the Supreme Court. Some of his ideas, though, like infrastructure programmes and welfare policies for the unemployed could just as easily have been part of Hillary Clinton's programme.

cafébabel: What would you tell Democrats who want to “give Trump a chance"?

Nadia Urbinati: I think it would be good if members of the Democratic party reminded Republicans that parts of his political plan have been previously carried out by Democrats in the past. The last thing the Democratic party should do is refuse to work alongside Republicans, as they would become isolated and ineffective. At the moment, they are the minority in both Houses. They should start preparing for the 2018 midterm election, as it would be a real tragedy if they lost that as well.

Nadia Urbinati is a professor of Political Science at Columbia University, New York. She specialises in modern and contemporary political thought.

Translated from The Trump effect: istruzioni per l'uso