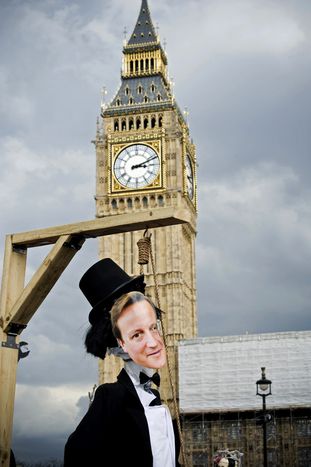 As 2010 drew to an end, Britain saw a level of civil unrest that had not been seen in decades. Between media bias, police violence, and petrol bombs, here is an eyewitness report on how it happened. Another student protest is scheduled in London for 29 January

It was a surreal tableau. On the dawn of 10 December 2010 the majestic houses of parliament in London overlooked an eerie landscape of mangled barriers, burnt-up placards, and smashed glass. This was Parliament Square, the focal point for an ill-controlled protest march over cuts and austerity measures that had spilled over into rioting and violence. It was the worst civil unrest to be seen in Britain in a generation. In particular, protesters had hoped to oppose the government’s proposal to triple the cost of university to £9, 000 a year for most students. Their efforts were in vain. The vote passed that day by a narrow margin. Rather than scrutinising the decision to raise fees, most media attention was preoccupied with whether Camilla, Duchess of Cornwall, had or had not been ‘poked in the ribs with a placard’. The car carrying her and her husband of five years, Prince Charles, had been surrounded by a breakaway group of protesters, who kicked the car, cracked a window, and splashed it with paint while chanting ‘off with their heads’.

Many found the protests a cause for hope. Students and schoolchildren, of a generation long disparaged for their political apathy, seemed to discover their voice. University buildings across the UK were occupied for days and weeks at a time, becoming the impromptu headquarters of the protest groups, hosting lectures and debates. Many across Britain, however, were shocked by the violence that accompanied the marches, apparently perpetrated both by protesters and police.

I was coming home from work in central London on the evening of 9 December. The chants of protesters could be heard in the distance. Discarded placards were scattered along the side of the road. As I entered Waterloo tube station, I saw a young man with blood covering his face, running down into his clothes. His nose appeared to be broken, and he was holding a blood-soaked swab to it to stem the bleeding. I stopped to ask if he was alright, and whether he had been at the protest. This was Phil Kelly, a recent graduate in cognitive neuroscience from University College London. A few days later we met to discuss what had happened. Testimony. 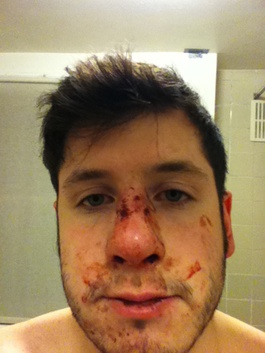 ‘I was at university doing some work when I heard the protesters heading down Malet Street, so I joined them. We walked down past Leicester Square. Once we reached Parliament Square, it all started to happen very quickly. The police wouldn’t let us out, and people were getting frustrated. Everyone started getting riled up, and it seemed like the police panicked. They started to push protesters back, and people started trying to run around them thinking they would get kettled. They met with the other line of police.

The barriers came down in matter of minutes. People started lifting them up and throwing them at the police. At the other side of the square, there were no barriers, and was even worse. The mounted police charged into the crowd. There was violence on both sides. People were throwing stuff at the police. But many of the violent people were actually further back, so innocent people were getting mashed between the violent protesters and the line of police.

Many of the more violent protesters were London schoolkids aged fifteen or sixteen. They didn’t know why they were there, and they were very ill-informed about the reasons for the protest. They were being directed by older ones, dressed in black, many in balaclavas, possibly part of anarchist organisations. They really seemed like they knew what they were doing. They were egging them on to smash up telephone boxes and windows, to storm the treasury. Many people were prepared for confrontation – some had eggs, some had brought Lush bath bombs. They were throwing them at the horses because they explode and scare them.

It was very cold, and people started building fires. I saw one kid, between thirteen and fifteen years old. He had a bottle filled with alcohol and a soaked rag in it. He lit it off the bonfire, picked it up and just started running towards the policemen. He threw it, and I heard an explosion, glass shattering. It missed the police. One protester confronted him and tried to hand him over. But he had support – a group of schoolkids ripped him away.

I saw a couple of police intelligence officers who were taking photos of the people who were smashing up the phone boxes. One of the kids started shouting at the guy – ‘why are you taking pictures of us?’ Then a whole group started chasing him. He pelted towards the police line. I don’t want to think about what they would have done if they caught him. They were the violent ones. I wasn’t beaten by the police, but by other protesters. There was a fire in one of the corners next to a traffic light. Someone pulled plastic tarpaulin onto it, and a little later someone put an aerosol can onto the fire, and it exploded. Molten plastic went flying everywhere, some hit my jacket. One guy was shouting at the people who had done it. They came over and started laying into him, pushing him, and it just escalated. Myself and two other people tried to step in and stop it. Then they turned on me.

Somehow I tripped over my own feet, and someone started stamping on my face. I remember someone hitting me with one of the placards while I was on the ground. It only lasted for ten seconds or so before someone lifted me up. There was a group around me looking at my face, a girl looking in horror because there was so much blood. What had happened? Had I a really big cut, or broken my nose? There was a lot of blood on the floor. A guy said sorry on behalf of the people who had beaten me and took me up to the police line. As the police were letting me through, they were getting pelted by bottles. I was put into an ambulance with a schoolgirl. She had hurt her back in the horse charge and was in a wheelchair. As the police charged, the protesters had nowhere to retreat to, and she was one of the ones who were squashed against the barriers. She couldn’t stand up or walk. When I was in the hospital, five or six more people came in with injuries they said had been inflicted by the police – mostly head injuries, one broken arm.

The decisions made by the police that day maximised the violence. They didn’t know what they were doing. There were a lot of police officers, but they weren’t intelligently positioned. Many of them seemed scared, or unaware of what they were supposed to be doing. They panicked and lashed out. They stopped protesters from going on their designated route, and started kettling them very early on. That led to a very quick escalation of violence in many of the cordons. They didn’t do enough to pinpoint those who were committing violence. To prevent violence at football matches, police work together with stewards from among the fans, who hand the violent people over. The police should do this with the student organisers of the marches. It’s absurd – the police were monitoring twitter feeds, but not asking what the organisers’ plans were. There needs to be more training, and much more communication.

The media have been irresponsible and unbalanced. Bias has been shown by the BBC. I’m very proud of what’s happening – students getting mobilised. But I’m not proud of what some people are doing. But the media are just focusing on the violence, rather than what the protests are about. Now they’re talking about banning marches altogether and bringing in water cannons. That’s just ridiculous; it will make things worse if anything. I don’t recognise my country.’