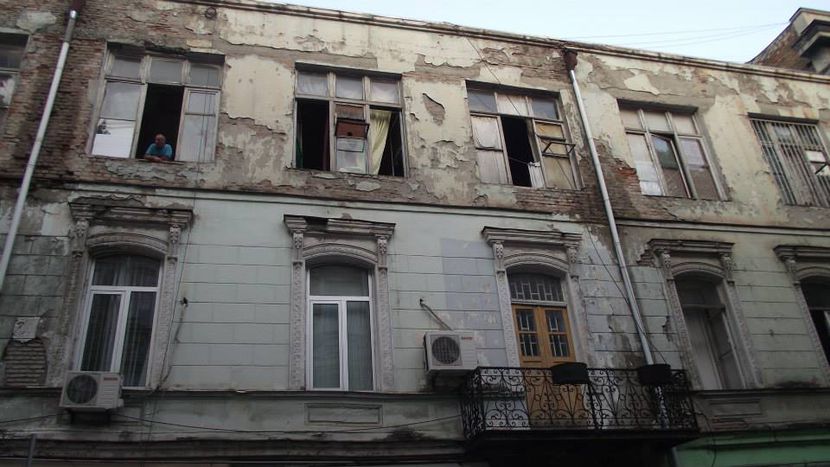 Since 2004, the Tbilisi city government has aimed to take control of the numerous unsanctioned construction projects that sprung up across Georgia's capital city after the break-up of the Soviet Union. Their efforts, however, have left many residents concerned that Tbilisi’s historic landscape is being irreversibly altered

When you arrive in Tbilisi, the haunting beauty of the city’s architecture, nestled against the sloping hills into which it is built, immediately catches the eye. During the sweltering heat of August, tourists stroll through the bustling streets at night, enjoying views of well-lit churches and soaking in the vibrant energy of Georgia's capital city while avoiding the scorching sun. If you are brave enough to venture into the streets during the day, however, when the 4pm sun will leave you dizzy and cause you to dash for the shade of one of the city’s numerous urban parks, the excessive number of sweating labourers toiling away in the dirt and dust, rebuilding homes and commercial buildings alike, will most likely give you pause.

What Can be done to Stop This?

According to many of Tbilisi’s residents, the numerous renovations projects are aimed at pleasing foreign tourists and wealthy investors, and are leading to the gentrification of Tbilisi’s historic city centre and the destruction of its authenticity. Several cases have been upheld as examples of the government’s disregard for the city’s cultural heritage and historic architecture. In 2011, anger was directed at the Old City Development Fund, the entity responsible for maintaining the city’s cultural heritage, when it destroyed a 17th century cellar during a reconstruction project. According to Inge Snipe, a freelance journalist based in Tbilisi, “the Fund demolished several ancient and rare cellars in the Betlemi area that have significant cultural heritage value, without even a permit to start reconstruction works”.

The incident in 2011 could have been forgiven as an honest mistake if a similar one did not take place just one year later.  In the summer of 2012 a grassroots protest movement spontaneously emerged as residents became aware that a historic building in Gudiashvili Square was also set to be ‘renovated’ in a far from ideal manner. The building, an early 19th century structure known as ‘the Blue House’, was sold to a private company that immediately began removing parts of the roof. As pieces of the building were being carried off, local residents became nervous. With the help of a local NGO, Tiflis Hamquari, a highly successful public demonstration was organized. The demonstration received widespread attention from both the media and the general public, but ‘the Blue House’, which once housed the Georgian Writer’s Union, was demolished. Strolling through Gudiashvili Square today, the majestic splendour of the historical buildings there takes your breath away. They are, however, in desperate need of repair, as the loveliest ones are in a state of near decay.

A small victory was won in early 2013 when a protection law was passed which states that the Ministry of Culture must vet all alterations to or demolitions of buildings listed as heritage sites. Despite the new law and public concern, however, a demolition order had already been granted by the City Hall for a turn of the century house located at 13 Melikishvili in the Vera district. The Ministry of Culture is currently challenging the City Hall’s decision, but it is likely that the demolition of the house, designed by renowned Georgian architect Simon Kldiashvili, will go ahead.

Is it too late for Tbilisi?

Many of Tbilisi’s local residents believe that much of their city’s historical architecture has already been destroyed and replaced by cheap imitations, and that the modern buildings look out of place in the city’s historic centre. The Old City Development Fund grants permission to private companies to demolish historic buildings under the condition that the new constructions resemble the original ones, but to many the duplicates are far from equivalent to the originals. Meanwhile, stark, modern structures can be seen interspersed among the older, fading but still majestic, façades.

Tbilisi’s architecture is representative of the city’s rich history and includes Georgian, Byzantine, European, and Middle Eastern styles. The oldest parts of town, including the Abanot-Ubani, Avlabari, and Sololaki districts, include a traditional Georgian architectural style with Middle Eastern influences. The start of the 20th century experienced an architectural revival that included an art nouveau style that was eventually declared bourgeois and neglected under communism. The current government hopes to construct three skyscraper complexes, the Axis Towers, Redix Chavchavadze 64, and the new Ajara Hotel/Business Complex, which will be the tallest in the Caucasus.