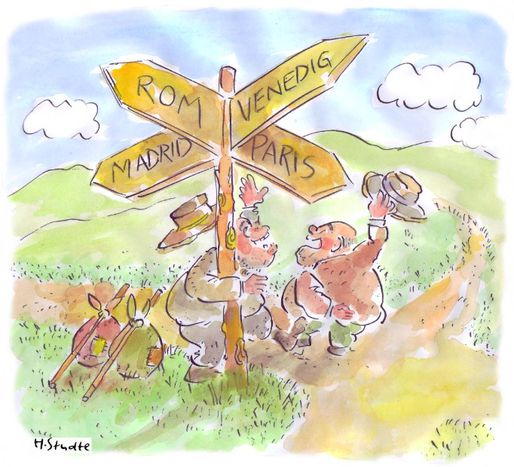 Talk of the city

In the middle ages the town was such a desirable place because, as the medieval Germans noted, Stadtluft macht frei ('city air makes you free'). Someone who had lived in a city for a year and a day was freed from serfdom. The city-dweller however still yearns for a genius loci and so half of Europe sights, captivated by the radiance of the city of water, would see Venice and die

The Neapolitans would also welcome you to die:  Vedi Napoli e poi muori

('see Naples and die') went a pun of the place name Muori (a small place which comes 'after' Naples) and the verb muori (Italian for 'to die').

). Poland sees things the same way: Życie jak w Madrycie, it can't get any better for someone who leads a life as if in Madrid. Henry IV had other preferences. With the motto Paris vaut bien une messe! ('Paris is worth a mass'), he converted to catholicism and was crowned King of France.

The city also stands for centralisation. As the longest serving 'global player' is the catholic church, so all roads lead to Rome: alle Wege nach Rom

At the end of the road an English rule of good manners demands the borrowing of local customs: When in Rome do as the Romans do

. But neither the urbs aeterna (Latin for 'eternal city') nor Krakow was built in a day. With the phrase nie od razu Kraków zbudowano, 'calm is called for in Poland'.