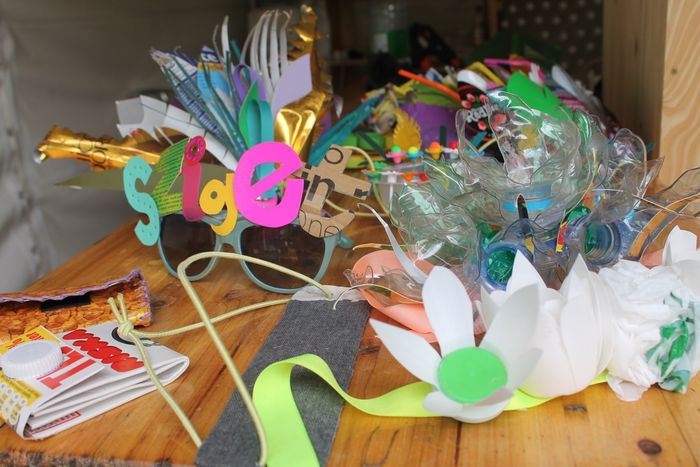 Last year, I heard a group of French people complaining that Sziget Festival puts zero effort into making Szitizens eco-conscious, adding that they would never come back. Too bad for them - they would be surprised to see how much the organisers have done to make Europe’s biggest music festival greener, better, faster & stronger.

Sziget 2016 was more colourful, sexy and smelly than ever - no wonder, considering a total of 496,000 people (or roughly half the population of Budapest) visited the Island of Freedom thouroughout the seven days of the festival. This many people make a lot of noise, and even more rubbish; still, we at cafébabel Budapest didn't mind the smell so much.

As the days passed, we caught sight of more & more colourful dustbins all around, from close-up we realized Sziget organizers put out yellow recycable ones for plastic and metal, and green ones for the smokers. At the end of the day we spotted a Recycling Center tent just across the green field, opposite our cafébabel Budapest stall. Hallelujah - of course we had to check this out! This poster welcomed us... 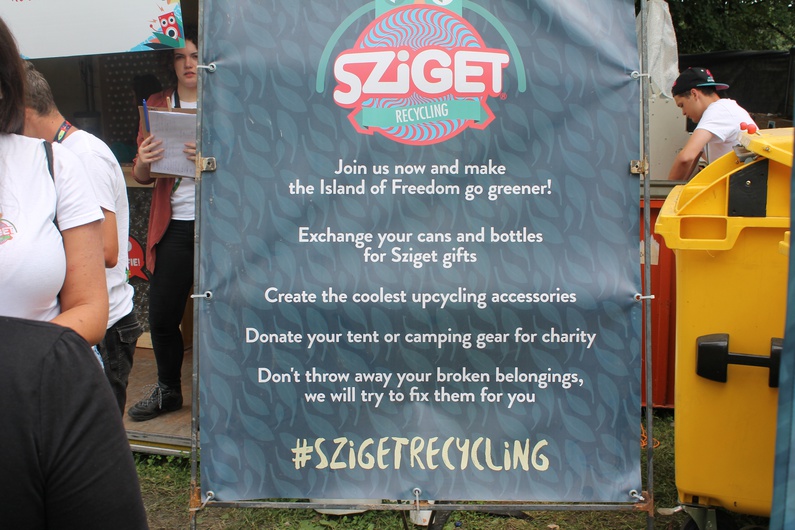 ...as well as a dozen people preparing decoration items and jewellery out of recyclable material and a bunch of volunteers working for the stall. 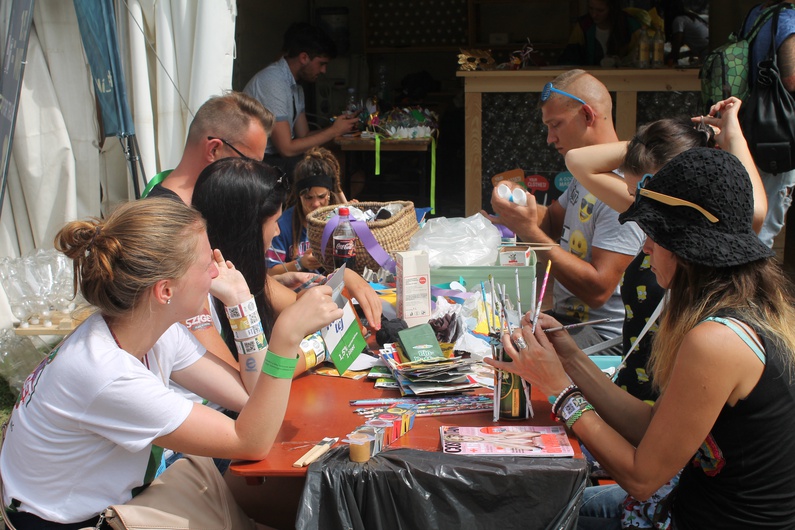 “It is the first time we've seen see a recycling tent at a festival, we love it!” say Judith and Emma, first time Szitizens from Barcelona who are in the middle of preparing a Christmas tree for their next evening’s thematic party at the camp site.

“We use our own litter to do the decoration, this time it was not enough, so we came here to use the stuff people brought here”adds Emma, 29. “We do recycle in Barcelona, it's easy, as there are selective dustbins everywhere. Why not here as well, we care about our environment!” laughs Judith, showing us her second-hand-brand-new violet Christmas tree. 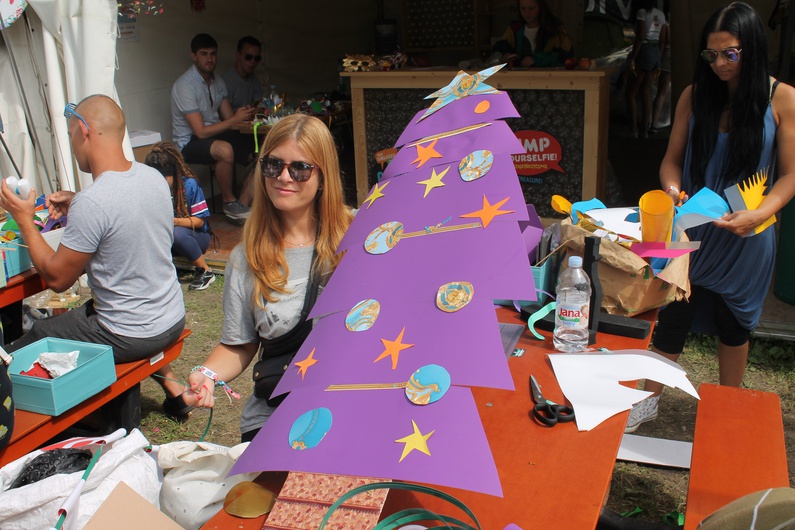 “The Recycling Center is always full, and I see a lot of stuff made here in the concerts," 24-year-old volunteer Adrienn proudly tells us. She hadn’t known she would end up here as a volunteer when applying, but she is really happy about it!

“People are very positive about these Centers, there are three of them on the site, many come here to ask for bin liners, and the bottle exchange is really popular. It became a routine for the visitors,” explains Adrienn. “You can come here with your broken belongings and we try to fix them together, you can donate your goods to charities that help refugees, or get 15 min of Wifi for two cans or PET bottles. Some of us even sit next to the recycle bins and offer you an apple when seeing you putting an item in it!” 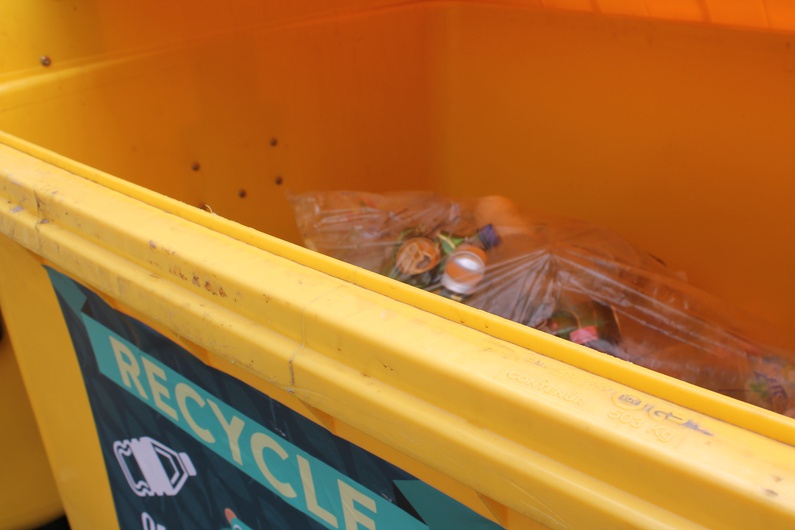 You want to sell at Sziget? Go Green!

It's not Szitizens that are being encouraged to be more environmentally friendly, but also the vendors. A group of employees go around day and night to provide them with bins for glass bottles and bin liners for aluminium & PET bottles. This year it was announced that food stalls must provide the customers with paper plate and wooden cutlery instead of plastic ones. The Green Partner program, which also debuted this year, rated each vendor & food stall at the end of the festival, offering free tickets to the winners for next year's Sziget.

Taking out the trash

Eszter and Csilla, both 19 years old, represent one of the most useful group of workers on the Island of Freedom: the Rubbish Picking Team! Their job is to go around the festival and collect every piece of rubbish they find on the ground. They do so eight hours a day, and in return they get money, food and a place to stay in the camp, as well as the gratitude of the Szitizens.

“We are employed by a company working for Sziget," they say, a bit shy about their job. "we work a lot but get paid quite well. Also, we often get free food from the stalls which entrance we clean. Szitizens are happy about our presence, they smile and often help by putting their litter directly to our bins when passing by.

"Tipsy foreigners give us big hugs and big smiles; we hear "thank you" in English more often than in our mother tongue…" 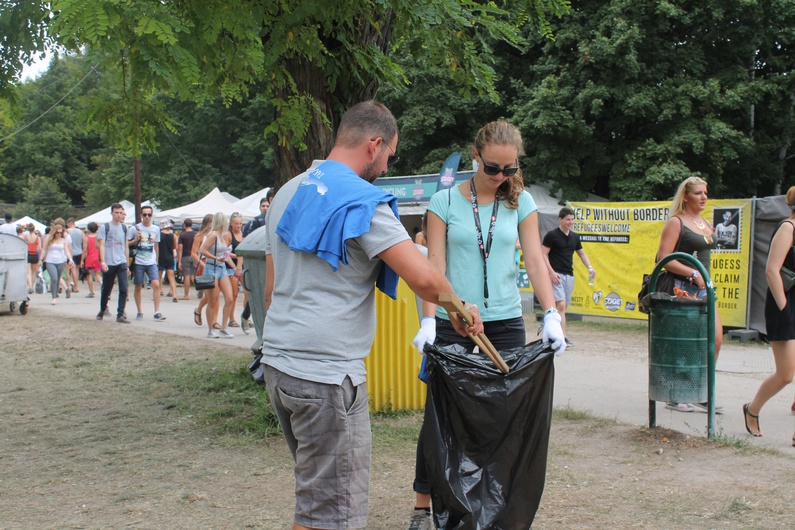 Eszti and Emese are also 19-year old Hungarian girls, visiting the Island of Freedom for the second time in their life.

"The recycling bins are new this year, we appreciate a lot that Sziget puts effort into going green! Green actions even get advertised on the Main Stage before the concerts, that’s how we learnt about it!” The girls add that the idea may be great in theory, but in practice there are some bugs to work out. This morning they found a shredded pack of cards in front of their tent, though the dustbin was only two metres away.

If they pass along a recycling bin, that’s where they put their empty bottles, but they don’t collect them for the presents. “We saw the Recycling Center but we haven’t entered yet, we didn’t have anything to give them.” 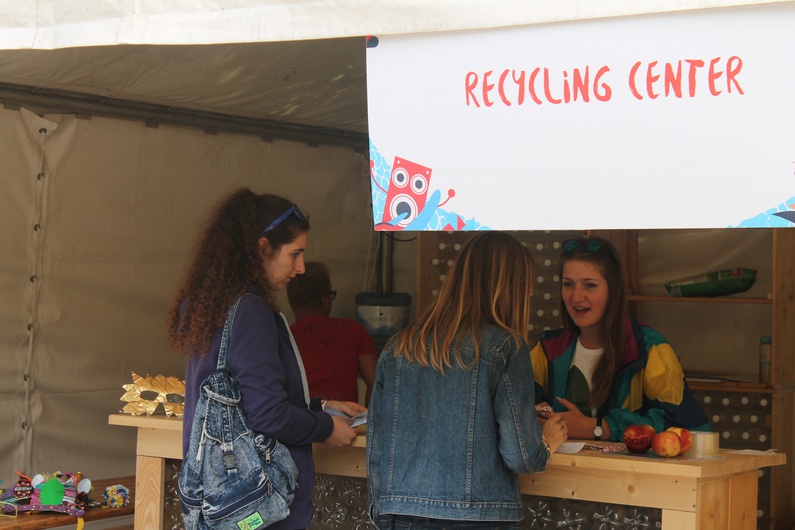 Sziget still has a long way to go before it's as green as some other festivals out there. But one day soon, dry toilets made from recycled material will dominate the Island of Freedom; and the already colourful and sexy festival will become even greener (and maybe a bit smellier). Though they can put down more sawdust...