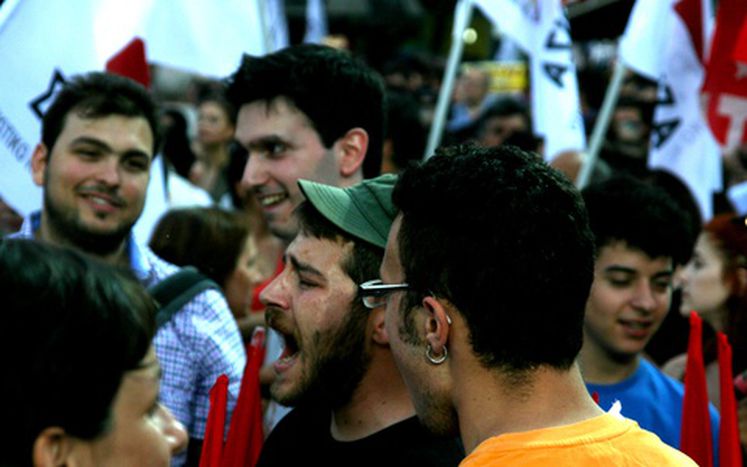 We travel to Athens to discover Neolaia SYRIZA. From the Exarchia district to the university campus, cafébabel met the youth faction of the most radical left-wing party. So, who are these young children of the Greek left and what are their views?

The road climbs smoothly towards Strefi Hill is called Themistocleous. We are at Exarchia, the feared anarchist bastion of Athens. It is the artistic and cultural centre outside the control of the ruling powers, at least since 1973, when the remarkable Polytechnic rebelled against the dictatorship of the Colonels. In the streets of this 'free zone', murals, community centres, cafés, and alternative bookstores abound, but you will not find a bank. It is no coincidence that it is in this main square that protests began in 2008, after the murder of 15-year-old Alexandros Grigoropulos by the police. 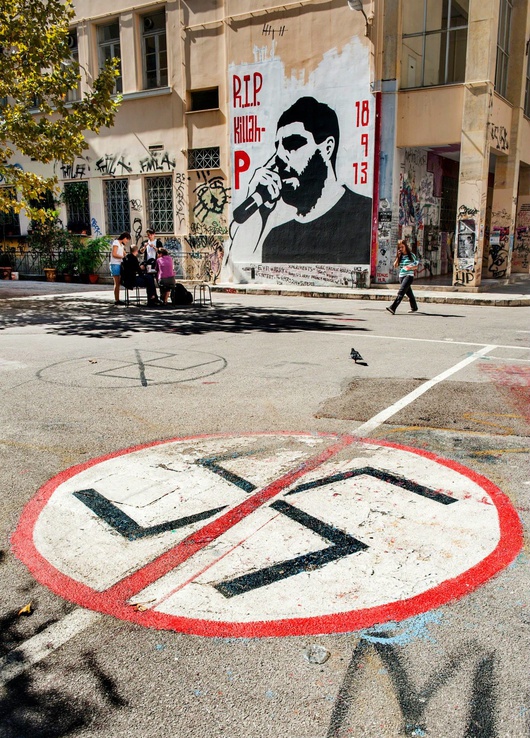 Next to Exarchia Square, we find the headquarters of Neolaia SYRIZA, the youth faction of Alexis Tsipras' political party. Tsipras is a rising star in Greek politics and is a nightmare of the Brussels Troika. The building is anonymous and a bit shabby. Only the party flags differentiate it from the anarchists and anti-fascists who dominate the neighbourhood. Shutters, bolts and dead calm. We will never enter inside the premises of 52 Themistocleous Street. The young activists are at the campus of the University of Athens.

But our attempt to approach the radical left-wing is full of mishaps that offer an insight into the country's political thermometer. At Syntagma Square, on a warm morning, students from a music school protest against the recent cuts for public transportation in front of a police barricade. "After five years of protests, Greece is radicalising towards the left," says a young medical student. A little further on, in front of the headquarters of the Ministry of Economy, university students demonstrate against the government, while waving the flags of communist labour union PAME. The tension is palpable and the atmosphere electric. There are even some soldiers in the building’s garrison, and one of the soldiers aggressively asks us to show him our permit to take photos. 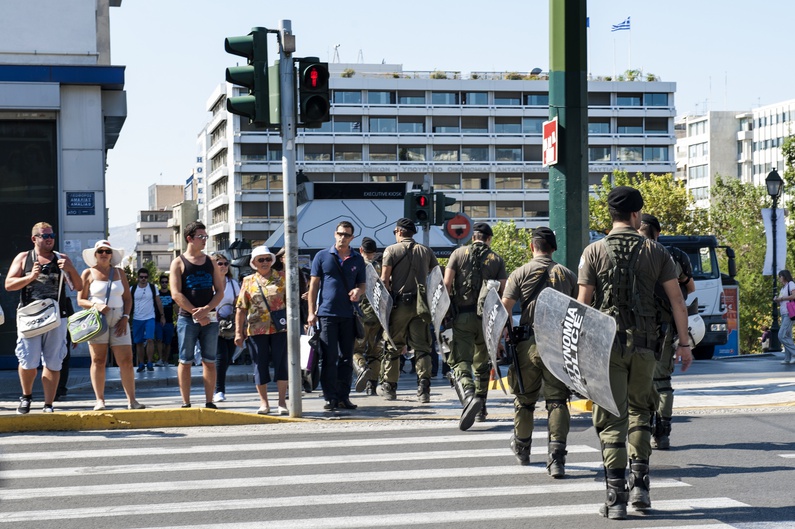 At the Panepistimio metro station, we meet Alexandros Zachiotis, our contact. A 25-year-old student, he has been active in the youth section of Synaspismós, the largest party of the political alliance that gave birth to the SYRIZA coalition in 2004. The group, whose acronym means Synaspismós Rizospastikís Aristerás – Coalition of the Radical Left, became a real political party in 2012. As we walk to the campus of the National Kapodistrian University, his explanation is illuminating and sometimes methodical, suggesting a certain familiarity with the media. Officially founded in December 2013, Neolaia SYRIZA arises from the attempt to give a European flavour to efforts against the crisis. It also opposes the liberal model through "solidarity between nations and peoples in Europe." 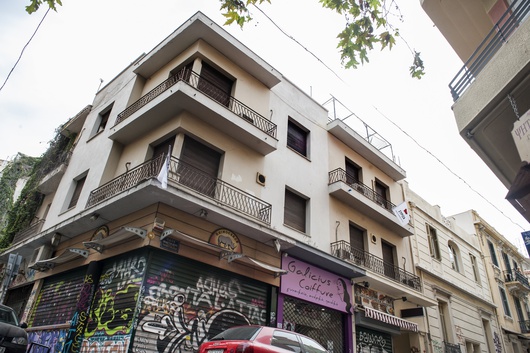 Alexandros passionately recounts the party’s history. "SYRIZA is the child of the communist tradition. We have some aspects in common with theGreek Communist Party, but they are motivated by Stalinist ideology and have a very strict and closed policy on alliances. They criticise everything, they think they hold the truth. Instead, I believe that political action must lead to results and for that reason, I chose SYRIZA," he says with conviction. What does it means to be a young activist of a left-wing party in modern society? "It is a question that we're always trying to answer," he confesses. "We try to take the positive things from the communist tradition and try to revitalise them. Our goal is to create a 21st century socialism," a statement taken directly from the official party manifesto.

From Hugo Chavez to Evo Morales

With a hint of the idealism, Alexandros mentions the models of Latin America's Hugo Chavez and Evo Morales as he speaks of excesses of the current capitalist vision, and dreams of cooperation and of civil rights. But why should a young person yearn for a new kind of socialism in 2014? "Today, many young people are highly educated and have skills that could be used in a different way. There is huge potential. The new socialism must be based on knowledge and skills."

But in times of crisis, Neolaia SYRIZA also has a direct connection to the territory. "Before becoming a political party, SYRIZA was a movement." The activists are the "beating heart" and contribute a symbolic fee every year. The organisation is a hybrid model. There is a central committee in Athens and then other small offices in the largest cities in the country, such as Thessaloniki and Patras. "We are trying to create a more horizontal stucture and create a platform for alternative information in English to inform readers outside of Greece," adds Alexandros. Every aspect of social life within the organisation is regulated by an ad hoc committee. "We don't need a lot of money, we only need it for the festival."

"If you are not radical, you cannot make a difference."

We arrive at the university campus just in time for the final preparations of the festival. The four days of music, culture and passion will conclude with a speech from Tsipras and speeches from their European "friends" Maurizio Landini of FIOM (Federation for Metal Workers) and Pablo Iglesias of Podemos. However, there are elements that are typically Greek, from the tribute to the famous singer Vassilis Tsitsanis to the delicious grilled souvlaki. The park boasts a swarm of thematic workshops, debates, exhibitions, and stands such as the one dedicated to Palestine, and even a space for workers fired by certain multinational corporations. 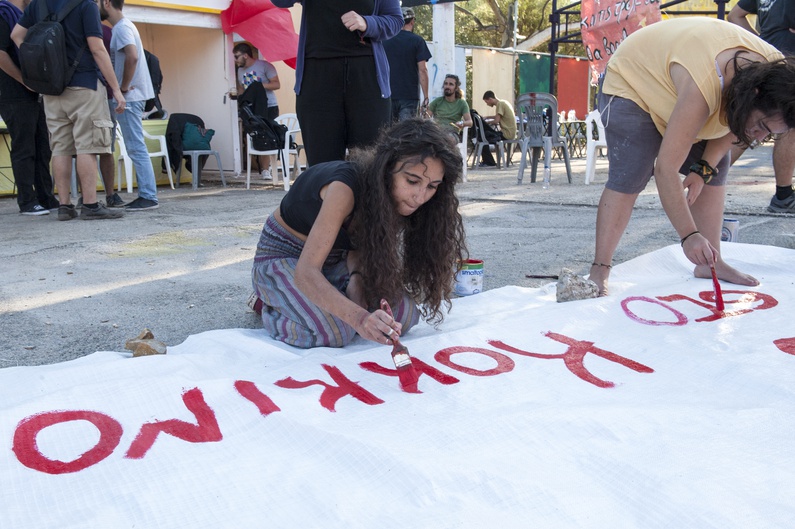 All the volunteers are busy. "If we want to be unique, we have to give our best. We are not the best and we do not have the truth, we want people to come here and participate to show them what we are doing," says 20-year-old Kiriakos with the spontaneity of someone who feels part of something positive and great. "At a time like this you have to be radical, if you're not, you cannot really make a difference and change the state of things." 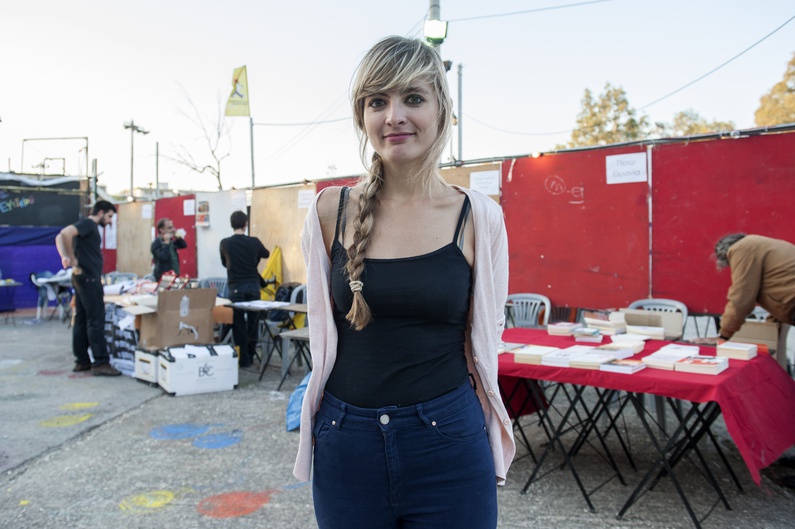 The sun begins to set as the first visitors enter, but our attention is drawn to the purple colour that dominates some of the booths. "The red symbolises Eurocommunism and revolution; green, ecology and purple, feminism," explains Aliki, member of the Central Office of Neolaia SYRIZA. "We are working a lot on gender policies," she continues, while showing me the special exhibition devoted to feminism.

When the party goes live, you can also spot older visitors, nostalgic of the 1960s generation. Four days are not enough to accurately paint a portrait of Greek youth with their left-wing heart, but Aristotle was right when he observed his fellow citizens, these eternal "political animals."