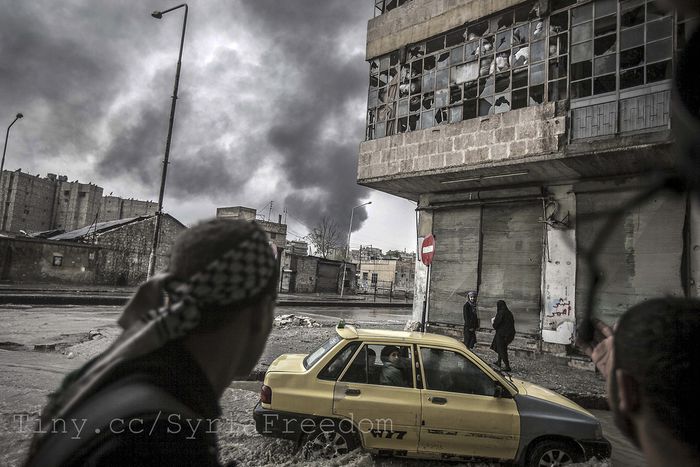 On the 21st of August, hundreds were killed in Damascus in a suspected chemical weapons attack. While the Assad regime blames the rebels, USA secretary of state John Kerry makes it clear that he has little doubt of the regime's culpability.  Now, the US and the UK seem to be preparing for a military intervention. BBC journalist and blogger Sakhr Al-Makhadhi discusses the current situation in Syria

cafebabel: USA secretary of state John Kerry stated that there is little doubt that Assad used chemical weapons against civilians. What is the discussion in the Arab media about this point?

Sakhr Al-Makhadhi: Arab media is as divided as the region is. It all depends who is paying the bills. Iranian state media and broadcasters close to Hizbollah either take a 'wait and see' attitude or blame the rebels. Gulf media points the finger at Assad.

cafebabel: Who supports military intervention in Syria in the Middle East? And why?

Sakhr Al-Makhadhi: In the Middle East, Turkey is the loudest cheerleader. Prime Minister Erdogan feels personally aggrieved that his former ally failed to take his advice to reform. He feels that Assad lied to him and is taking the Syrian deterioration very personally. In addition, his country hosts a growing number of refugees and there has been tension between Turks and Syrians in border towns. He also accuses Assad of sponsoring anti-Turk Kurdish militants. And of course, Assad shot down a Turkish jet.

cafebabel: In case of a military intervention, don’t we risk again an escalation of anti-western world feeling and Al-Qaeda gaining support?

Sakhr Al-Makhadhi: No. The prolonged civil war and the lack of western leadership is angering Syrians and Arabs. They are crying out for the US to use its leverage. Indeed, many question whether NATO would've taken action earlier if Syria had big reserves of oil. As for Al-Qaeda, they will benefit from the continued disintegration of Syria.

cafebabel: Can we really speak of a civil war? What about estimates of government consent and rebel consent among the Syrian population?

Sakhr Al-Makhadhi: A civil war occurs when Syrians kill Syrians in large enough numbers. That has been happening for at least 18 months. Even though the regime retains support among a proportion of the population, Assad is little more than a warlord, albeit the country's most powerful one. There’s the possibility of targeting specific military sites of the Assad government.

cafebabel: Would it really change power relations in the civil war?

Sakhr Al-Makhadhi: No. Military action would only aim to teach the regime a lesson. It would have political rather than military aims. The goal is to make a point about the use of chemical weapons, not to empower the rebels or to overthrow the regime. The west has made it clear that it doesn't want to get militarily involved in Syria's civil war.

cafebabel: Germany pushes for peace talks. Are there the conditions on the ground? Is there any willlingness to conduct them by the parties involved in Syria?

Sakhr Al-Makhadhi: Neither side is ready for peace talks. The opposition said that after Qusair and the involvement of Hizbollah, it would not attend talks. And the regime has shown little sincerity in even recognising the National Coalition.

cafebabel: How important is the role Russia can play in this diplomatic crisis?

Sakhr Al-Makhadhi: Very. When it decides to drag Assad to the table, or when it decides to cut off arms supplies, the balance of power in Syria will change very quickly, given the resources of the Syrian government.

cafebabel: How long could the civil war last?

cafebabel: Are western media overlooking some aspects in the discussion about military intervention which are highlighted by the Arab world media?

Sakhr Al-Makhadhi: It's still early days. We don't know how deep the intervention would be. At the moment, the outrage is over the use of chemical weapons, not the flag on the plane that will respond to that outrage.