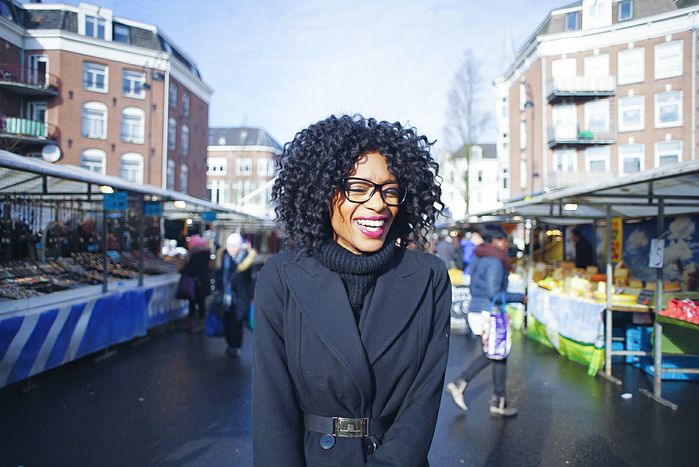 Sylvana Simons: "Racism is institutional. That means we have to change the institutions."

Can a TV star change a nation? Sylvana Simons, 46, is trying with Art1kel, the new Dutch political party which was born in December 2016.  Its objective? To rid the Netherlands of a culture built on "structural and institutional racism." But to do that, it needs to win votes in the elections taking place this week.

A latte "à la Simons" comes in a glass with three white sugars. When the waiter at the Dauphine, in the south-east of Amsterdam, arrives with it, she smiles: "Sometimes I don't even have to ask." Silvana Simons is a star, and she knows it: "I've had an extraordinary life," she affirms, without a moment's hesitation or embarrassment. I raise an eyebrow and give a sarcastic smile, but she doesn't back down. She looks me in the eye and adds: "Trust me, I'm not kidding. I should write a book about my life." 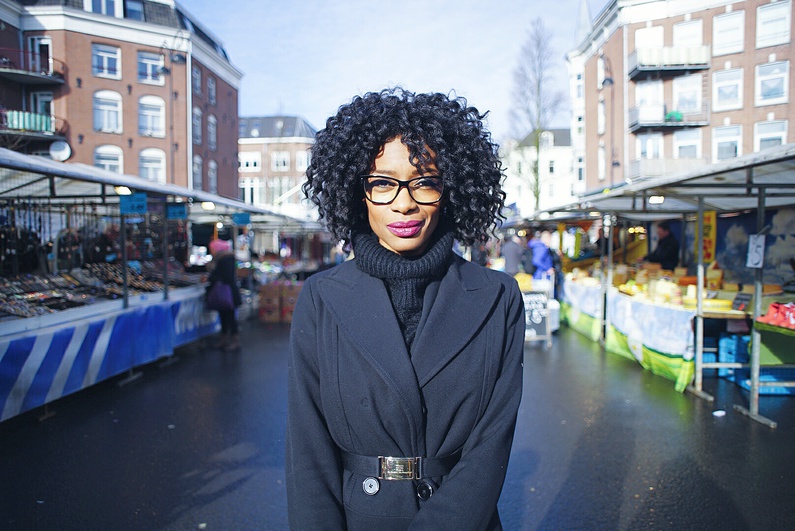 A ex-ballerina and former TV host, in 2016 Simons founded the political party Art1kel to fight against inequality and racism in the Netherlands in 2017. This Wednesday, she hopes to become a member of the Dutch parliament. She was born in 1971 "under the Dutch flag but on the other side of the world" in Paramaribo, the capital city of Suriname. The youngest of 16 brothers and sisters, she was always "the favourite." By the time Suriname gained its independence in 1975, she was already in Europe; specifically in the neighbourhood of Amsterdam West, "one of the most multi-ethnic areas of the city at that time." When she was 10 the family moved to Hoorn and it was there, in a small and obscure Frisian town, that the young girl "chose" her destiny: "I was going to become a famous ballerina." The only problem was her name, which didn't quite fit the image. And so, little by little, 'Silvana' became 'Sylvana.'

You can take the girl out of Amsterdam, it seems, but you can't take Amsterdam out of the girl; in the 80s, a teenage Sylvana returned to the "Venice of Northern Europe" to attend ballet school. The city, with its shows and distractions, seduced her, and she admits: "I've never been a conditional student: I studied at the university of life." In the end, the "favourite of the family" never finished her studies - nevertheless, became a professional ballerina and, for a while, toured the world. But it was "only" in 1995, at the age of 21, that she ended up on TV for the first time. Sylvana became one of the leading faces of the new music channel TMF Nederland (which regularly beat MTV in the ratings for several years). The new millennium saw her moving between various TV channels, and by 2012 she was a recurring guest on the well-known talk show De Wereld Draait Door (The World Keeps Turning). Sylvana had entered the living rooms of the Dutch. 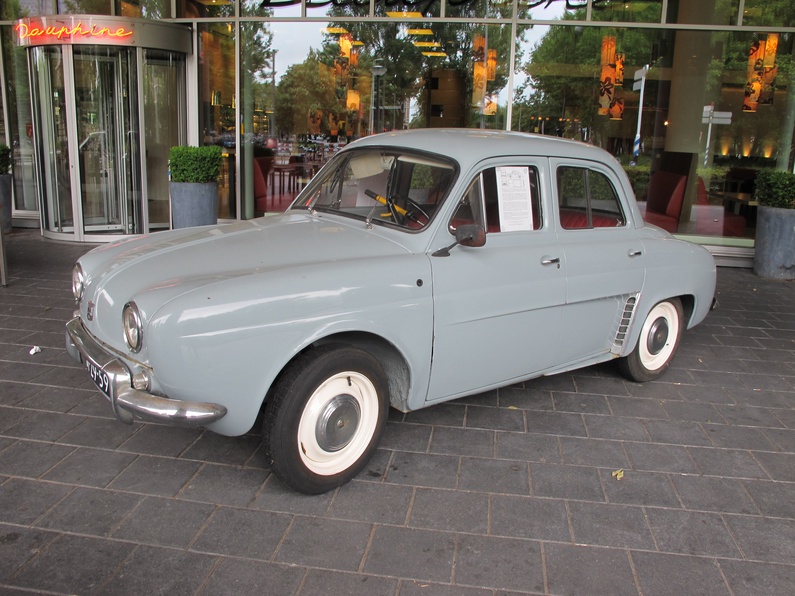 Seated in the corner of the Dauphine I ask, in all sincerity, what this has to do politics and racism. But, as someone once said, you should never look a gift horse in the mouth, and before answering Sylvana launches into a passionnate defence of showbiz. "Even superficial entertainment has a purpose: we all come home after work looking to relax." Turning back to my question, she says that she "kept a critical eye on my surroundings", even when the producers risked turning the spotlight on her. Sylvana gestures - her deep red lipstick the same colour as the sofa she's sitting on - and asks me to keep up as she "jumps back and forth" in time.

When Sylvana was a young girl in Hoorn, she says, "we always talked philosophy and politics at home. There was always some friend of the family over for dinner. As the last of 16 siblings, she was born as a grown-up. Her father, the centre of her life, was tough but fair. "Remain indifferent to politics? Impossible!" she says, as if he were sitting here next to her. Yet to listen to her, Sylvana's story isn't the typical tale of an immigrant pulling herself up by her bootstraps: "My parents were well-off, and I had a privileged upbringing."

According to a report by the Open Society, men and women from ethnic minorities in the Netherlands are three times more likely to be stopped by police and suspected of a crime than white people. Sylvana knows all too well how that feels: "I had just started working for TMF, and I bought myself a brand new sports car. One night I was driving, and I had a friend in the passenger seat wearing a bandana. I always had short hair then, and from behind we could be mistaken for two guys." They found themselves flagged down by a police officer on a motorcycle for seemingly no reason. "We hadn't done anything wrong. But often it doesn't matter. Even today, two black people behind the wheel of a sports car... it doesn't 'look good.'"

Sylvana recounts the episode in a voice dripping with sarcasm; especially the "astonished" look on the cop's face when he realised his mistake. She says that such incidents are as commonplace now as they were in her father's time, but it would be wrong to suggest that her life was forever altered by one encounter. "After I left TMF for cultural enrichment programmes, I began to expand my horizons and explore cultural issues more deeply. And I realised that all of these episodes of discrimination are linked by a common thread - racism in the Netherlands is structural and institutional."

Article 1 of the Dutch Constitution states that: "All persons in the Netherlands shall be treated equally in equal circumstances. Discrimination on the grounds of religion, belief, political opinion, race or sex or on any other grounds whatsoever shall not be permitted." It was these words that inspired Sylvana to form her party, Art1kel, in December 2016. But in the era of anti-establishment rhetoric, is a new party the best means of addressing these issues? Sylvana is in no doubt: "If you want to solve a problem, you have to address the root cause," she says. "So if racism is institutional, that means changing the institutions. Which means going to the parliament."

In a way, Sylvana's entire life seems to have been a struggle between idealism on the one hand and pragmatism on the other: from abandoning her studies to appear on television, to leaving that career aside to "make sure my children don't suffer the same treatment as their parents." She laughs, and jokes that she has probably grown up. "I've always been an idealistic person, but the need to stand up and fight has never been stronger than it is today. When people ask me why I made the choices I made, I just tell them that it was time and I was ready."

But not everyone believes in Sylvana. Some say her victory would do little to change this behaviour. Many claim the former TV star is only chasing personal glory; that the only thing linking the different stages in her career is a thirst for success. It's true that Art1kel is not Sylvana's first foray into politics. The beginning of 2016 saw the creation of Denk ("Think", in English), a new collective formed mainly of Dutch citizens with Moroccan and Turkish origins. Denk is also fighting against discrimination and segregaton, particuarly in the jobs market. But the party is conservative-leaning, while the left-leaning Sylvana is looking to fill a seat recently vacated by the Dutch Labour Party. In late 2016, a growing rift between Sylvana and Denk's leadership led to her leaving Denk and forming Art1kel.

The day before our first meeting, a Dutch acquaintance of Moroccan origin asked me to put a very simple question to the leader of Art1kel - why did she leave Denk? When I ask, Sylvana looks away for a moment, then looks back with her fingers interlaced. She seems to understand that the question is on many peoples' minds; especially those who face hostile rhetoric from the likes of Geert Wilders and who see only divides across the political spectrum. "I want to be frank," she says: "A party like Denk, which focuses so much on being anti-establishment, is likely to burn out quickly. What we need is an inclusive project; one that also involves the white Dutch population."

She adds that her departure from Denk was somewhat forced, after a period of confrontation: "My ideas weren't taken seriously in the party. I was told not to talk about certain issues on the campaign trail because it would lead to a lack of consensus. And as for her 'thirst for success'? "I put my livelihood at stake to become part of Denk. Many of my clients [she worked freelance in the world of television, Ed.] would no longer work with me once they knew what my political affiliations were. If all I wanted was a seat in parliament, I would have stayed with Denk; it was a sure thing." 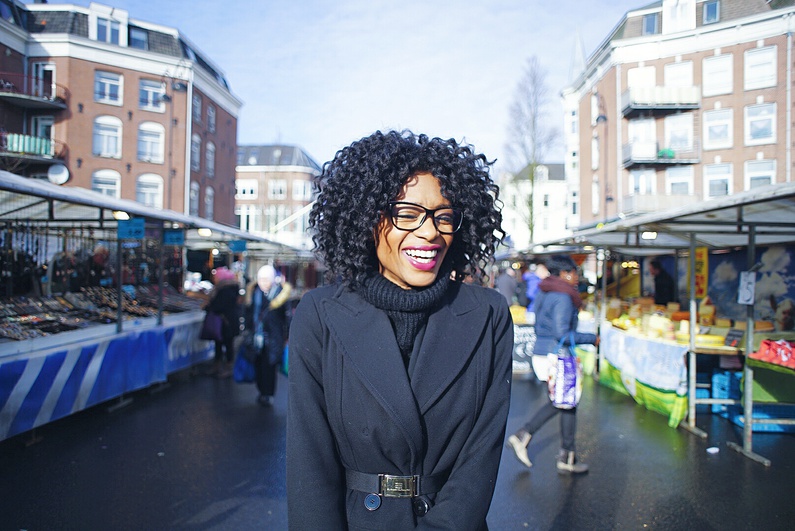 The polls suggest that Denk and Art1kel will both struggle to win any seats in the election (though Denk's chances are slightly higher). For most people, the ability to count the months you've spent training for an election on a single hand would be a political death sentence, but not for Sylvana. "We are more of a party [than Denk]: we have a strong base of activists, and a strong movement. We may be young, but we're in it for the long haul. And if we don't get into the parliament now we just have more time to prove how much we're needed." I suggest to Sylvana that racism may simply not be a priority for some people, but she disagrees: "You can't deal with poverty, unemployment or sexism without tackling racism head-on. Which is why, both inside and outside the party, we're trying to launch a debate about 'intersectionality'."

Art1kel isn't just a party fighting against racism; but against inequality is all its forms. "It's always through inequality that racism takes hold," she explains. But if racism is related to inequality, why hasn't the left taken the issue to heart? For Sylvana, the problem is one of credibility: "You have to practice what you preach. The parties of the left are overwhelmingly comprised of white men and women. Art1kel is the only truly diverse party." If it's credibility Sylvana wants, I tell her it might be a good idea to drop the Y from her name. She looks at me incredulously, as if I've read her mind: "I was just thinking that a few days ago."