Swarms and marauders: the dehumanising language of migration

With much of Northern Europe turning to the right, so have the words used to describe attitudes towards migrants. How are migrants spoken about across Europe?

Depending on what group of people you’re talking about, there’s a clear hierarchy of word choice. If you’re white, you’re an expat; if you’re not, you’re an immigrant. And when it comes to the worldwide refugee crisis, most people affected are in the latter category.

Heck, in the UK, even the word ‘migrant’, supposedly the more-humanising alternative to the already-denigrated terms ‘refugee’ and ‘asylum seeker,’ is frequently prefixed with terms like ‘flood’ or ‘influx.’

But these terms apparently aren’t enough even for politicians, eager to gain some political capital by tapping into the anti-immigration storm stirred across Europe. The xenophobic sentiment fostered by the UK press has seen the majority of migrants considered as economic opportunists and benefit scroungers rather than what they really are: victims of conflict and instability, often perpetuated by Western intervention, be it through soldiers on the ground (Iraq, Afghanistan), aerial bombing campaigns (Libya) or selling weapons to many of the armed factions or regimes in these countries. 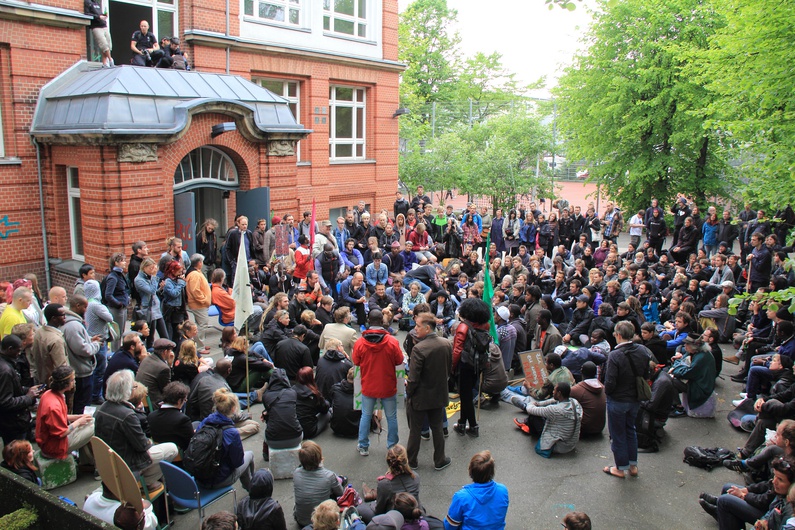 Now, we have the UK Prime Minister David Cameron talking about "a swarm of people coming across the Mediterranean, seeking a better life, wanting to come to Britain," while his foreign secretary Philip Hammond reflects on the awful situation in Calais with carefully chosen words such as: “So long as there are large numbers of pretty desperate migrants marauding the area, there always will be a threat to the tunnel’s security.” What splendid chaps.

It’s gotten to the point where those invoking Godwin’s law should maybe piss off: Because now you can be upvoted in the comments under Daily Mail articles, when posting Nazi propaganda (but replacing ‘Jews’ with ‘migrants’). But that’s just the UK in 2015. What about other European countries?

In Denmark, where the recent election saw the Eurosceptic, anti-immigration Dansk Folkeparti (the Danish People’s Party) win the second highest number of seats, similar vocabulary is being used, as Louisa explains: “It’s the same in DK, sadly. The use of the word 'oversvømmet' is increasingly common in connection with migrants. It means "flooded". As in: "we are being flooded with migrants," which is a ridiculous statement if you look at the numbers…”

Ingunn tells us that such language isn’t so common further in the North, “No, there’s not a lot of that in Norway as they have to go through either Sweden or Denmark to get here. The discussions have mostly been about whether or not we could accept 10,000 Syrian refugees from the UN (approximately 3 per commune), which ended up being too much for this very friendly country. They settled on 8,000 and then they made sure it's not people in need of severe medical help and preferably people with higher education so that we at least can benefit economically by helping them. Lovely…”

Johannes, from Austria, says: “Well, I would say that here, the language is not that harsh, but the sentence "We can't take everybody" is sort of ruling public discourse. But that sentence is being said by the likes of politicians, as well as people who protest in front of asylum seeker homes.”

Our Italian editor Lorenzo explains that while the Italian press have agreed upon a charter for correctly reporting on migrants (which they’re starting to adhere to), “people and populist politicians often refer to migrants as 'Clandestini' i.e. illegal migrants. It comes from Latin, referring to people who hide themselves. 'Vucumprà' is another term to describe vendors on the beach, who are mainly immigrants. It's quite disparaging even if common people use it quite a lot: it's a mispronunciation of 'Wanna buy?' (Vuoi comprare?)”

In France, it’s common for people to say 'clandestins', as well as 'migrants' and 'poor people,' while in Germany, Fran explains, “Yeah, we have a lot of negative names for different migrant groups, but most stem from the times when guest workers flowed into the country in the 1960s. Today, the German media tries to stay quite politically correct.”

But it’s not just political correctness; it’s about treating people in desperate situations with humanity. It seems that across Europe, we could learn from the likes of Anja Reschke, a news presenter on Tagesthemen, the nationwide news bulletin of German public broadcaster ARD, in calling out this shift in tone and language: