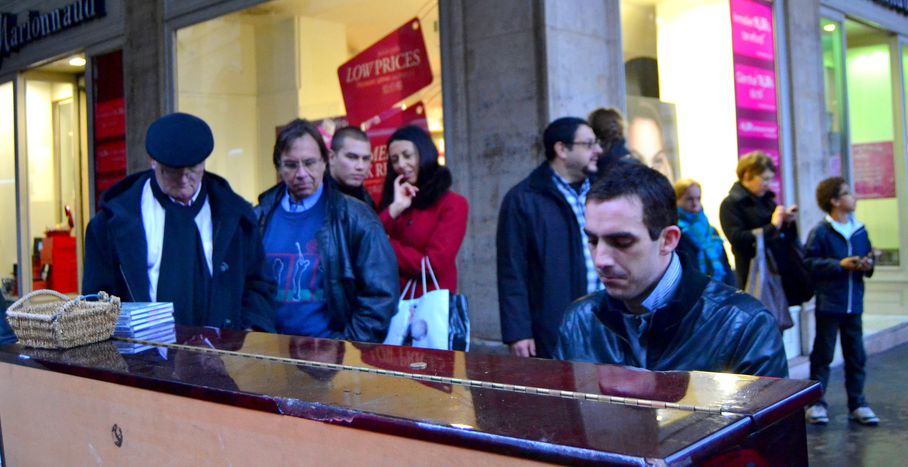 Sunday in Paris with Chopin and Steve Villa-Massone, street pianist

After trailing the streets of Europe with his piano - literally carrying it around - for ten years, the dedicated French pianist and composer from Nice is now bringing smiles to Parisian passers-by. We tag along with him in the streets of the French capital  - the more of us around to push this heavy instrument, the better

Steve Villa-Massone opens the sliding door of a van with the logo of a vehicle-hire company on it. 'Mine's broken down,' the 30-year-old explains. Inside there is an upright piano held down with straps and a carrier with two big wheels. After a bit of maneuvering, the piano – a gift from a shop in his native Nice - is now on the road, ready to be moved by the French pianist and composer who, for the last six months, will have been seen along with his instrument in even the most unheard-of parts of Paris. 'This must be the happiest piano in the world. It travels loads and sees many things,' says Steve. The thirtysomething has spent a decade passing through the streets of numerous countries. 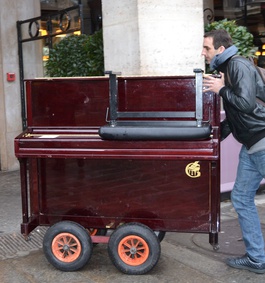 'Today, I'm going to play under the arches in the square near the constitutional court (Conseil d´Etat - ed),' says Steve, as we head off. After piano-pushing a couple of meters and gaining the attention of tourists, he stops in a corner of the rue de Rivoli, a famous shopping street parallel to the river Seine. Steve, wearing jeans, trainers, a leather jacket and a scarf, drops his backpack at his feet, lays out some CDs and a basket on the piano before opening the fall board, or piano lid. Amidst the dense traffic and the chaotic pedestrians, we hear the Minute Waltz by Chopin. The public, looking surprised, start to crowd around him. The chords strike to the beat of the coins as they start to fall in the basket. 'Playing in the street allows me to earn a lot of money,' explains Steve later. He takes short breaks to take in the applause.

After an hour, he gets up and goes to his friend, the van driver. 'I urgently need the loo.' Whilst he works out where to go, we use the opportunity to chat with him as we walk. 'I don't play the piano on the streets to survive,' adds Steve. 'This is how I earn a living.' Sometimes, all of the commotion brings the police around to give him a telling off. 'I'm outside of the law. Playing on the street in prohibited.' After passing by one of the hotels in the area, Villa-Massone calls for a location change. 'Let's go to Haussman boulevard, in front of the Galleries Lafayette department stores.' He and a friend get the piano back in the van, and we climb in the front. 'I don't have a driving licence - but there's always a friend willing to give me a hand,' he says, before adding that he can even offer me a coffee, indicating a jug and a glass on the dashboard.

Learning from the best

It's now six in the evening on a winterSunday, and we drive to one of those busy streets where you can barely move forward. To make things worse it's raining, making the Parisian traffic even more difficult to get through. 'Nobody gets out a 140kg piano and moves it from one place to another for the fun of it,' Steve emphasises whilst pointing out to the driver how dangerously close he is to the vehicle in front. He likes prising pedestrians' eyes from their mobile phones. 'Those people who do stop are people who really appreciate music.'

'My dad thought I was insane. They thought it was a joke'

Steve first opened a piano lid when he was five years old, thanks to private classes that his brother gave him. He spent a couple of years in a music academy, too, to 'perfect the technique and learn what I needed to to be able to compose.' He remained inspired. 'I worked in a bar in Nice and saw a man who got his piano out in the street on a daily basis. I started working with him. We travelled. He gave it up but I carried the idea on. Playing in the street started out as a bit of fun and turned into a job.' His family struggled to accept it. 'My dad thought I was insane. They thought it was a joke. However, it quickly became something viable, something that seemed to be worth it and from then on they encouraged me.'

Paris is the place for pianists

Every day of the year, come rain or shine, you can count on Steve to be playing. 'It's important for people to know that they can always find me in the streets,' he says. Haussman boulevard and Caumartin street, which both form part of Paris' central artery of boulevards and another famous shopping corner, are two of his favourite haunts. Of course, the outcome on the day ultimately depends on the place, the street, the weather and the time, he explains, as he points out the quickest route to the driver. He's played all across Europe, from France to Poland, but he claims that his favourite city is Paris. 'Here, you have a lot of opportunities. I don't have to compete with anybody to work here.' 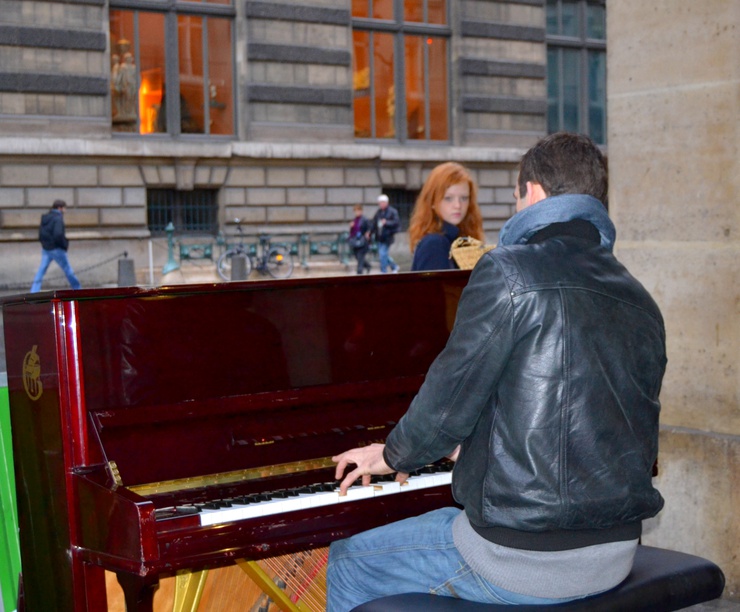 He's often received job offers in the street to play in bars, but he's always found time for his real passion: composing. 'Right now I am composing a piece for some choreographers from the Opera Garnier in Paris. Three of the sixteen pieces will be my compositions. Ideally, I would compose for films.' Steve admits that he would love to have composed Chopin's Grande Polonaise Brillante which can be heard at the end of the filmThe Pianist (Roman Polanski, 2002). 'I would like to make music of that standard for the movies,' he states whilst quarreling with the driver, who is starting to lose his nerve in the traffic jam: 'Honking the horn won't help; the light's red.' As we pass the Parisian traffic lights, the pianist draws us deeper into his confidence, and there is even a note of despair in his voice. 'I'd like recognition for my work,' are his final words. That will come, for sure. For the moment, Villa-Missone can count on his most important backing - that of the passers-by in the Parisian avenues who stop for a couple of minutes, everyday, to listen to him play in the epicentre of the chaos in the big city.