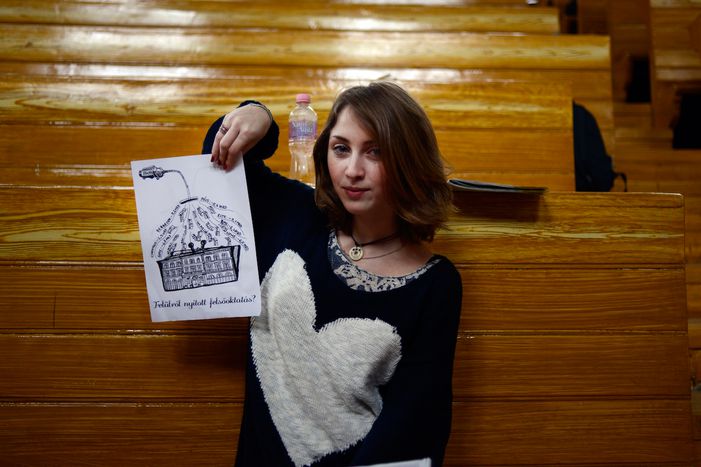 For about a month, a handful of students have been occupying the arts faculty in Budapest. They are asking the right-wing government to restore state funded education and abolish the infamous contract which allows students to study for free, but only on condition that they stay in Hungary for at least twice the length of their studies

Reporting for five days from the Hungarian capital, we see the Danube reflecting the apprehension and adrenaline of its youngest citizens. During an anxious and frenzied night in the library, they are kept warm by second-hand clothes, palinka brandy, and their desire for freedom. Along the colonnades of Kossuth Lajos utca, under faded covers, you can make out the forms of the area’s homeless. The sun shines down on the green domes of the faded buildings which adorn the dusty and baroque street. There is the Puskin film theatre, shops selling Hungarian knick-knacks, and men wearing sandwich boards handing out flyers about buying jewellery.

ELTE, the faculty of literature and philosophy, takes refuge from the traffic of hotel Astoria behind the building’s scrolled columns. In room 47, building A, it is lunchtime. There are ham and cheese sandwiches and they are not stingy with them, even if you do not look like a student. In the lecture hall, the debate is beginning. For eleven days, the young people of halligatói hálózat (HaHa), which is Hungarian for students' network, have been carrying out a peaceful but tenacious occupation demanding their well-known ‘six points’. 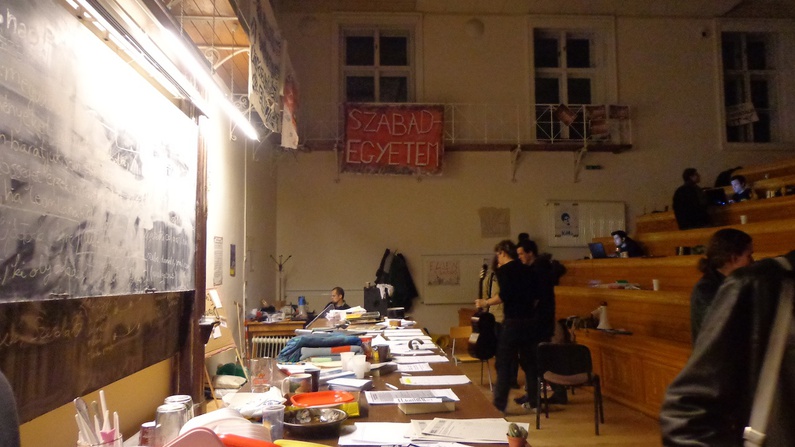 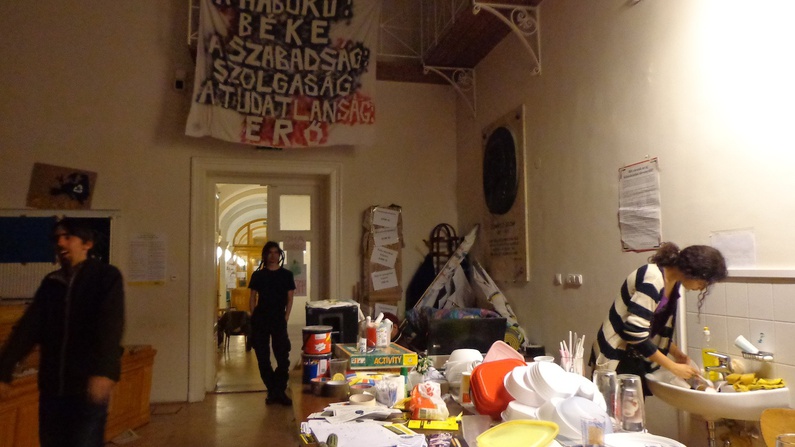 Eighteen people are present at the meeting, including a few students and some lecturers. 'I don’t want to go abroad,’ says Marton Fogl, a 22-year old student of philosophy and aesthetic, as he sits among the tiered seats. He is not the only one to have joined the protest on principle. 'We don’t want to feel chained to our own country,’ explains Balint Bokros, a 17-year-old college student. 'I want to stay in Hungary, but what Orban is doing goes against European law and against every programme for the mobility of young people.' 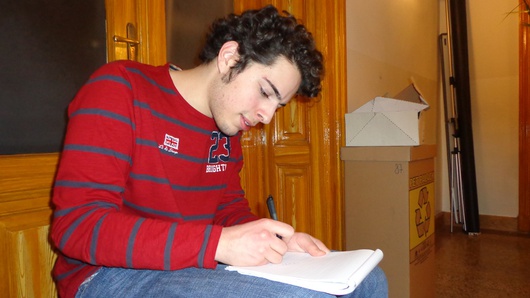 HOK (student association), the historic students union, has distanced itself from the members of HaHa in the last few days. In its capacity as official representative of university students, it is trying to reach an agreement with the government, but it refuses to make any other statements. The reason for this is a ‘list of shame’ which came out a few days earlier. It is a genuine secret database holding information on the ethnicity, religion, sexual orientation, and even the appearance of new undergraduates. In consequence of this revelation, they are to be suspended from their role.

Zombies, rules and shadows – a night in the occupied university

It is one o’clock in the morning. In room 47, I catch sight of Balint who has already fallen asleep in a corner. Gabor, 25, is one of the few who speak English. He gives me a warm welcome and suggests that I stay. ‘There are many nights when the campus becomes the backdrop for a game of chase,’ he explains, leading me to the building opposite. I start playing with the students who make comments to me amidst shrieks and laughter. ‘Are you trying to talk with fidelitas members?’ asks Atilla, 36. ’It’s impossible, they are the real zombies.’ Fidelitas is the youth movement of fidesz, the party in power, which is in a seemingly unassailable position. ‘For the next elections it would take a miracle, which would revolutionise the political class,’ cuts in David, a young sociology student, in perfect Italian, ‘otherwise there’s nothing to do but resign ourselves to a parliamentary coalition between (far right party) jobbik and fidesz, and move abroad on mass.’ 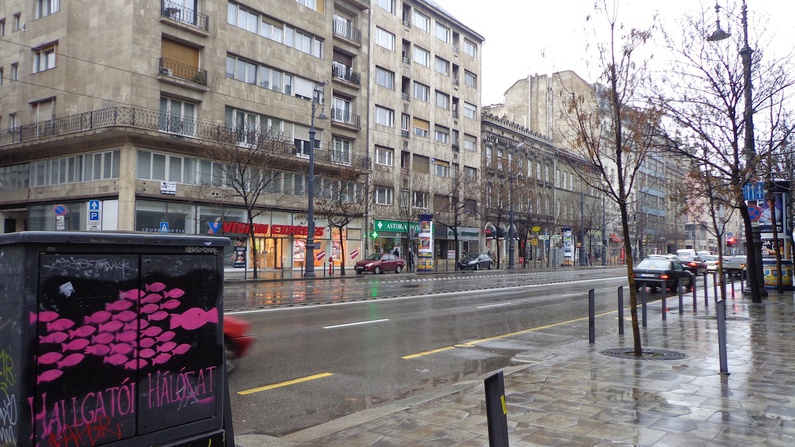 It is now 4am and most of the occupiers prepare themselves for another night. Bence, 26, is a Hungarian journalist from Budapest. For two days, he went back to the same university he studied in to follow the occupation. ‘The members of fidelitas live in a world of shadows,’ he explains. ‘They don’t want to be confused with ordinary people or have a dialogue, and they want to be invisible.’ Who knows what he would have said, if he had know that only two hours later, one of those shadows was behind the door of my hostel.

'The Hungarian people need rules, they are unable to manage freedom'

Csaba Farago, the international secretary of fidelitas, sits down and smiles obligingly. ’We are a centre-right party, sharing the values of christian democracy,’ the 30-year-old says, presenting himself as a spokesman for the party. ‘Orban has already conceded a lot to the students; so why should taxpayers pay for the tuition of a Hungarian student who then leaves the country? There are strikes, protests, occupations, but the Hungarians are with us. We will win the next elections without alliances, and certainly not with jobbik.’

Sceptical of the displeasure of European public opinion and scandalised by Orban’s arbitrary conduct, Csaba continues: 'The truth is that the Hungarian government always attracts more investment from foreign companies, which hinders the goals of France, Britain and Germany. Even in Romania, they don’t take into account the opinion of their citizens, but no one protests.’ He shakes my hand and bids me farewell. ’The Hungarian people need rules, they are unable to manage freedom,’ are his parting words.

Make virtue out of poverty

It is Saturday afternoon. On the third floor of a secluded building at the major traffic junction lending its name to the metro stop Blaha Lujza Ter, a happy and self-sufficient freedom seems to reign supreme at Müszi, an independent cultural arts centre. Emoke Domokos, 21, started working in social work with children after realising 'that it’s better to start with the adults,' she smiles. 'I believe in individuals, not in collective action,’ she explains candidly, reiterating how politics is a long way from her everyday life. She is independent enough to pay for her own apartment in Budapest and divides her time between studying and working. She leads a life dedicated to creative recycling by sewing clothes by herself and organising local markets. 'These days all we do is consume things and throw it all away. The art of recycling is not just for the poorest people, and is becoming more and more common in Budapest. The crisis is pushing us to show our creativity.’ 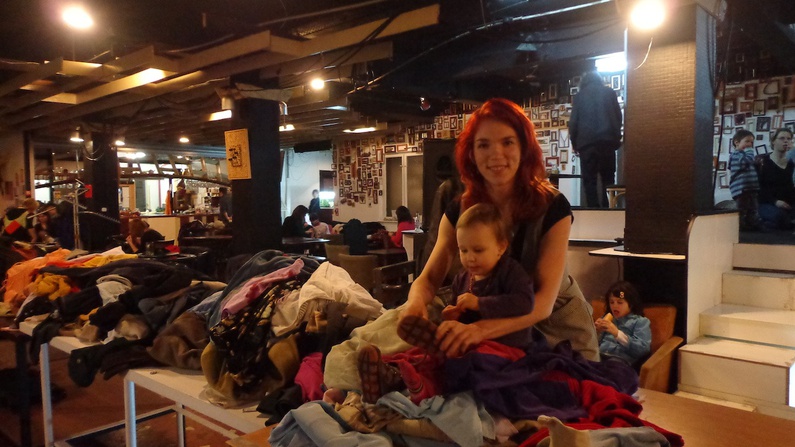 At the university, they let me know that a possible agreement with the chancellor will allow them to have a bigger room for the debate. They have decided to go ahead with it. A few days before however the Hungarian president, Janos Ader, approves the fourth amendment to the constitution, which was drafted by prime minister Orban. It limits the powers of the constitutional court, authorises the expulsion of the homeless from public places and officially introduces mandatory work in Hungary, for an as yet unspecified number of years, for students who have received financial help from the state to attend university. 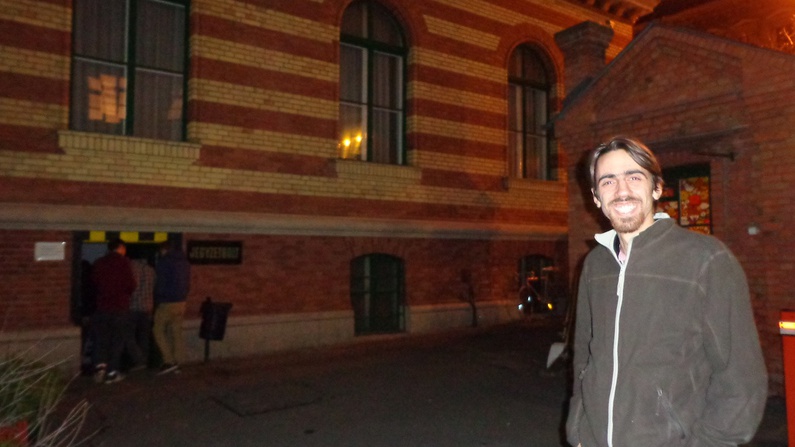 Hungarian politics is moving further and further away from these districts teeming with life, from the street markets and the carefree racing about in the university. ‘We need to start creating happiness and well-being in our own small way, without waiting for a solution to come from above,’ says Emoke. The freedom, which is alive on the streets of Budapest, suggests she is right.