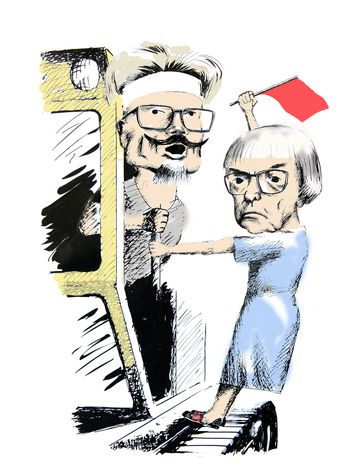 Just a fortnight after the ‘indignant’ protests of Europe, Russians are marching onto their streets and into their squares. However, their motive isn't the greed of those in power but rather the violation of their right to peaceful assembly. Alexandra reports from Saint Petersburg

It is half past five in Vosstaniya square in central St Petersburg on 31 October. A good ninety minutes before the beginning of the Saint Petersburg rush hour, traffic is at a standstill. Every three minutes or so the squalling siren of a police car fills the air. A steady stream of patrol vehicles are heading down the city’s central street Nevskiy prospekt towards St Isaac’s cathedral. It is here that hundreds of protesters known as ‘31-ers’ are assembling to stage the latest in a series of peaceful demonstrations against the government. They want to show the world how their government is failing to respect the basic rights guaranteed to Russian citizens in their constitution.

The name ‘strategy-31’ refers to the 31st article of the Russian constitution, which nominally guarantees Russians the right to peaceful assembly. In 2009Eduard Limonov, the founder of the national bolshevik party (NBP) and one of the leaders of the ‘other Russia’ opposition coalition, announced that demonstrations would be held on the 31st day of every month containing that many days against what he felt was a violation by the Russian government of this pledge.

The scene in Moscow is as chaotic as in Saint Petersburg. Soldiers at Mayokovskaya metro station in the north-west of the capital begin driving away photographers and journalists who have gathered to witness the scene. Over the next hour police and the military block the area’s underground passages as around two hundred protestors gather on nearby Triumfalnaya square, chanting slogans about the freedom of assembly. At least one hundred people are reported to have been detained in Saint Petersburg and Moscow alone, although the demonstrations are peaceful and come today in the form of slogans, flyers and, bizarrely, badminton. A number of protestors in Saint Petersburg turned up equipped with badminton rackets and shuttlecocks and began playing the sport in open, in a dig at Medvedev’s recent declaration that badminton is the ‘successful man’s sport’. Natalia Zvyagin from the interregional human rights group told novayagazeta.ru, Russia's most outspoken newspaper, ‘We are playing badminton because we listened to the advice of our president, who said that this can be done anytime, anywhere, at any age.’ Two players were caught up by riot police, despite the cries of their fellow demonstrators: ‘But Medvedev himself told everyone to play badminton!’

Protests have spread to Dresden and London

Certain aspects of today’s protest may have admittedly been more light-hearted, but it's worth noting that the first 31-er protest was held at Triumfalnaya square in Moscow on 31 July 2009. Three years later it is still the regular assembly point of Muscovite 31-ers. Today protests have spread to other Russian cities and even overseas to communities of disgruntled Russian expatriates. For example, October 2011 saw the first of such protests in Dresden, and protests have been held in London in the past. None of the civic assemblies on Russian soil have ever been unequivocally sanctioned by city authorities.

The protests are usually given a theme, with the latest being the upcoming regional and presidential elections in Russia. The slogan ‘Elections without opposition – a crime!’ was promulgated on strategy-31’s website, in reference to the role-swapping which Russian president Dmitri Medvedev and prime minister Vladimir Putinannounced in late September. The pair will change roles within the kremlin virtually unopposed by other candidates, in a move which has been criticised by many Russians as undemocratic. The organisers of strategy-31 are now calling upon Russian citizens to boycott the elections. An additional demonstration has been planned by the group for 4 December in Triumfalnaya square, the day of Russian parliamentary elections. However whimsical their form of political expression, it is clear from that perseverance of the 31-ers in the face of adversity that underlying the movement is a much more profound sentiment.