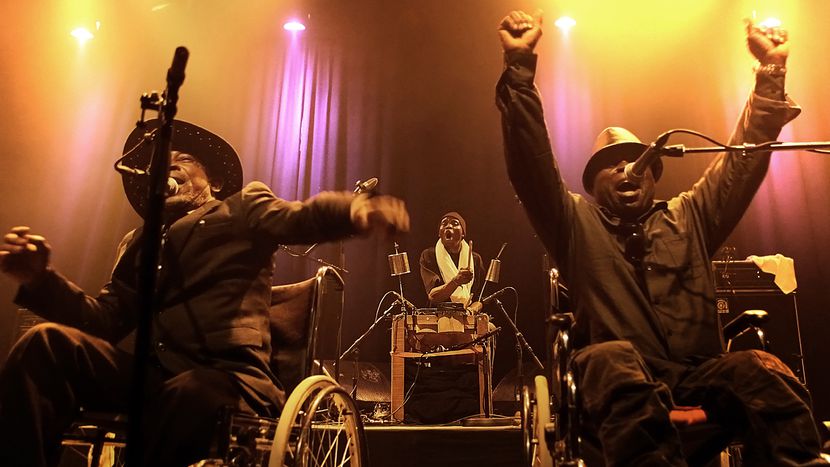 Staff Benda Bilili, voice of the voiceless in Congo

‘We're all handicapped people, ain't we?’ runs their myspace byline. After more than a month of touring through Europe, this group of paraplegic street musicians from Kinshasa left crowds elated and bewildered almost a year after releasing their debut album Très Très Fort, courtesy of Belgian producer Vincent Kenis of Congotronics fame.

Singers Ricky Likabu, Theo Nsituvuidi, Kabose Kabamba, Djunana Tanga and main songwriter Coco Ngambali grew up with polio in one of the most impoverished and destitute countries in the world. Because of their physical impairments, other musicians in the capital of the Democratic Republic of Congo refused to play with them. As a result, Ricky, Theo, Coco, Kabose and Djuana connected in 2004 through their shared experiences of discrimination and disability.

Today, the group adamantly believes that disabilities exist in the mind not in the body. With that, they are shaking up audiences across the world with hip-shattering performances, winning a 2009 Artist Award at the Berlin-based Womex (world music expo). The band’s name Staff Benda Bilili, a Lingala name meaning ‘beyond appearances’ (au-delà des apparences) is just a preamble to the powerful lyrics that express downright frustration and manifest the hard-hitting problems of Congo. Songs such as Polio - imploring parents to get their children vaccinated - and Tonkara convey disappointment and gripe both through their lyrics as well as the soulful, deep, evocative harmonies. In Moto Moindo and Marguerite, Roger Landu, Benda Bilili’s youngest band member at 18, wriggles hypnotic solos with the satonge, an instrument he created using an empty fish can, string and wood. 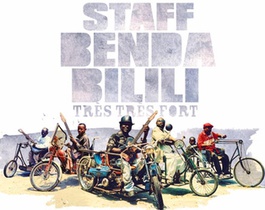 From classic Congolese soukous and rumba grooves, to reggae, old-school R&B, Afro-Latin sounds and funk their sound is explosive. Somewhere between the adrenaline soaring beats, Roger’s gripping, Hendrix sounding satonge playing, Kabama’s addictive vitality or the constant connection they have with the audience, it is virtually impossible to stand still. Without a doubt, Staff Benda Bilili is determined to make people enjoy, let go, and hit the dance floor. Yet, they also hope to open one’s imagination and spark inquisitiveness. ‘Even with a language barrier, we want people to go home and find out more about the meaning of our songs after they hear our music,’ Ricky says.

They are the voice of the voiceless in Congo, a country that has endured years of civil wars, corruption and a never-ending sense of instability. Their unquenchable love for rhythm, profound social critiques and relentless spirit and drive, has mesmerised crowds, spurred dance revolutions worldwide and opened up a means for dialogue. Their roaring debut into the world music scene has definitely left everyone with an unrelenting craving for more.

Images by Sofia Verzbolovskis; video performance of Na Lingui Yo by ©Florent de la Tullaye, one half of the French director duo who are filming the band/ Youtube