Alcohol, religion and fireworks - we swoop over Dublin on 17 March, feast (and party) day of the patron saint of Ireland 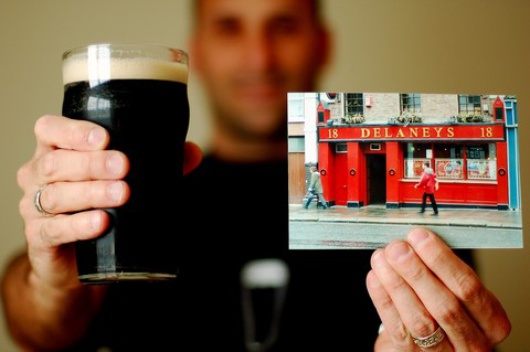 There are shamrocks everywhere. Drawn haphazardly onto sweaty faces. Carved into the frothy cream of dozens of pints of Guinness. Strewn across the noisy pub walls and dangling from the roof overhead. People squeeze past each other to reach the packed bar, shouting over the cacophony of traditional Irish music and chatting voices that fill the venue. On 17 March, this pub could be anywhere in the world. The people inside could come from anywhere in the world. But they will all be there to celebrate one thing.

17 March marks the feast day of Saint Patrick, the patron saint of Ireland. Schools, businesses and shops across the country will close in anticipation of the (often drunken) holiday. Towns and cities make way for the colourful floats of the annual St. Patrick’s Day parade. The largest of these takes place in Dublin and attracts over 500, 000 spectators. But the day is also a Feast Day in the catholic church, and for many Irish the religious element of the day is of continual importance, with many Irish attending morning mass at their local church.

‘St. Patrick’s Day is for the Irish when they are abroad, and for foreigners when they are in Ireland,’ says Grace O’Reilly, from a town north of Dublin. ‘Of course technically it is about celebrating our Irishness, but I think the true meaning is about getting all your friends together and just being together.’ In Irish pubs across Europe this year, hundreds of Irish ex-pats and Irish holiday-makers will meet to ‘drown the shamrock’ in traditional style. Irish rock band Aslan will headline an event in London’s Trafalgar Square. ‘Paddy’s Day is always better when you’re abroad,’ admits Billy McGuinness, Aslan’s rhythm guitarist, harmonica and occasional keyboard player. ‘We’ll be playing to a crowd of thousands. We can’t wait!’

St.Patrick's Festival 2008 will take place in Dublin from 13 to 17 March, culminating in the annual ‘Skyfest’ fireworks display along the River Liffey’s skyline. The festival attracts thousands of visitors to the capital each year. Cypriot Kristina Varvara visited the capital last year. ‘I just couldn’t believe all the drinking, which started so early on,’ she laughs. It’s precisely this element of the day which turns many Irish off the festival. ‘I won’t be joining in the festivities,’ says Irishman Conor Ryan. ‘If you walk around Dublin at about seven in the evening it’s just disgusting – people falling all over the place and vomit on the streets. I might meet a few mates for a drink or two in my local, but I won’t be going anywhere near the city centre.’

For Ireland’s newest demographic – the European workers from the newest member states – most are looking forward to the event. ‘My son learned all about the story of St. Patrick in school and can’t wait for the parade,’ says Darius Savickas from Lithuania. ‘We’ll definitely be celebrating, and I have been going to the fireworks display for the last three years. It’s lots of fun.’ Others look forward to the long weekend break. ‘I’ll be at home, resting and watching the parade on television,’ smiles Agata Varga from Hungary. ‘It is a holiday, after all!’