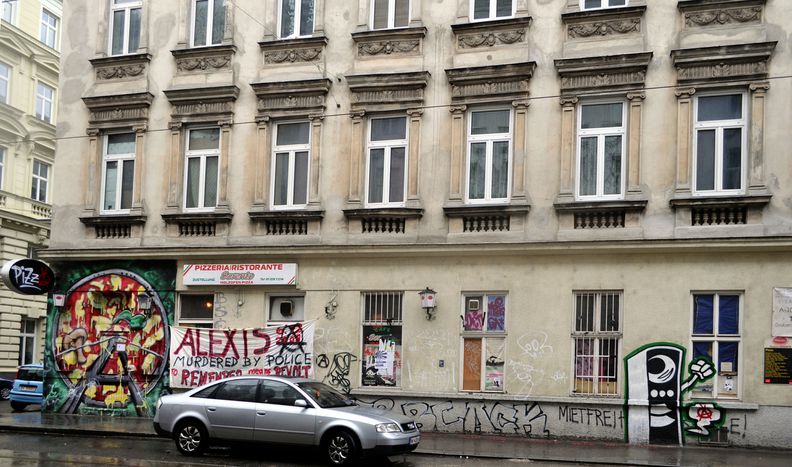 Squatters versus Real Estate Speculators: A Conflict Which Affects Us All

If you saw the pictures coming out of Vienna last Monday, you probably couldn't believe your eyes: an oversized police operation targeting squatters in the middle of Vienna led to accusations and gave rise to debates over accommodation costs. We should actually be discussing something else, though: real estate speculation and flawed tenancy law.

On Monday 28 July, the police had a warrant to clear a residential building in the 2nd District of Vienna [Leopoldstadt]. That in itself is no cause for alarm, but it's the amount of policemen involved and the squatters' motives which take you aback. According to the Federal Ministry for the Interior, 1700 policemen were either in on the operation or in reserve to 'expropriate' 19[!] squatters at 5a.m (a posh euphemism for a forced eviction). The operation was reinforced by a light armoured vehicle, water cannons and a police helicopter.

Even as the operation was taking place, heated debates broke out over social media about its excessiveness. What's more, the police kept changing their information about the number of policemen involved, until they ultimately refused to disclose a concrete figure. The police claimed that the large amount of policemen had been necessary to ensure their full safety and because there were various traps set in the building (the police reported one trap where an oven was supposed to fall onto the police force from a great height), as well as activists armed with eggs and paint.

These things must be discussed, that's understandable, yet the essential part of the story threatens to fade completely into the background. In order to clear up the details, background information is needed on the development of the property. The residential building was bought a few years ago by Castella Ltd. – as a typical object of speculation. The plan was to renovate the building and sell it on for more money. However, for the plan to be made possible, they had to get rid of the tenants, which they tried to do by hook or by crook: water damage and faulty doors weren't repaired; rubbish was strewn along the corridors; doors were smeared; and after having their letter box changed, the tenants weren't given the new keys.

It's hard to believe, but all this is common practice in the industry. Not all of the tenants were driven away by this victimisation, however, and so the landlord called over Hungarian builders to brick up the front doors. This was only stopped at the last minute thanks to the intervention of a committed politician from the District. As a last resort, in November 2011 the proprietor handed over an old pizzeria rent-free to punks, who were supposed to drive out the tenants with their alternative and sometimes loud lifestyle. It didn't turn out quite the way they'd expected; the remaining tenants and the activists quickly became friends, in order to stand up to Castella Ltd. Friendships were made and the punks reopened the pizzeria: that was the birth of ‘Pizzeria Anarchia’. More than 70 people would gather together there at peak times on Sundays to eat pizza and support the activists.

After the lease had expired, the property owner filed a lawsuit. There had been an eviction notice in place since February 2014, and the ruling has now been implemented by 1700 policemen following the 6-month deadline. However, the debate currently taking place over proportionality and accusations is missing the points which even the activists wanted to bring to light:

1) Speculators can go unpunished when they use intimidation and dirty tricks to drive out tenants in order to get the house empty for renovations. There’s a gigantic loophole here in tenancy law which needs to be closed up as soon as possible with policies. People cannot be forced out of their homes because the owner wants to speculate with the property.

2) These very speculations are a contributing factor to the overheated housing market in Austria and the rising lease costs associated with it. A current study by Allianz shows that housing prices have risen by 28% since 2008; only in Britain have there been greater increases. If large portions of the houses have to be paid with loans, a real estate bubble could arise. When one of these exploded in 2008, it triggered the financial crisis in the USA and Spain.

So what we really need to consider is the following: Should apartments and houses be there for living in or speculating with? It affects us all. If the cost of renting increases even further, it will become increasingly difficult for students to finance their lives in big cities. If nobody puts a stop to the tenants’ victimisation, more people will lose their apartments and get torn from their living environments. Here lies the real issue and this is what should really be discussed.