Bad news is around us every day: natural disasters, civil wars, conflict zones... The need for humanitarian aid in terms of food or medicine is extremely high. But how to cure psychological pain? Cafébabel met with Kevin Brooking, co-founder of Clowns et Magiciens sans frontières (CWB-Belgium), who talked to us about bringing a smile to the faces of people who need it the most.

The ceremony that creates joy

cafébabel (CB): Who are the Clowns and Magicians without Borders?

Kevin Brooking (KB): When we founded Clowns without Borders in Belgium there was already the French, USA and Spanish Clowns without Borders, so we were the fourth ones to become members. There was a magician that joined us in the beginning, that’s why we are Clowns and Magicians without Borders, and another clown/object and marionette performer. We started it together the three of us when we returned back from Gaza, where we did a workshop for a week. We were very moved to see what it’s like to exchange ideas on teaching theatre and circus through art and culture, to communicate and to give a voice to people.

CB: So what is it exactly that you do?

KB: It depends on the actual project. Each project is different because we have a different public and a different reason to go - we call them “tours.” We’ve played in refugee camps where we had audiences of up to 2,000 people so we needed to make sure that the images and the performances we made were big enough to communicate to such a big audience. We also think about the reason why we are there, what the context is. For example, the last tour was to Nepal after the earthquake. The performers had to make a show that was very light and that would enable them to tour with a backpack, because they were going to travel to some very small destroyed villages to which there was no access except for a long track. So they were trekking sometimes up to four hours to the mountains, which is why they had to prepare a show that was light but at the same time they had to play for up to 300-500 people. 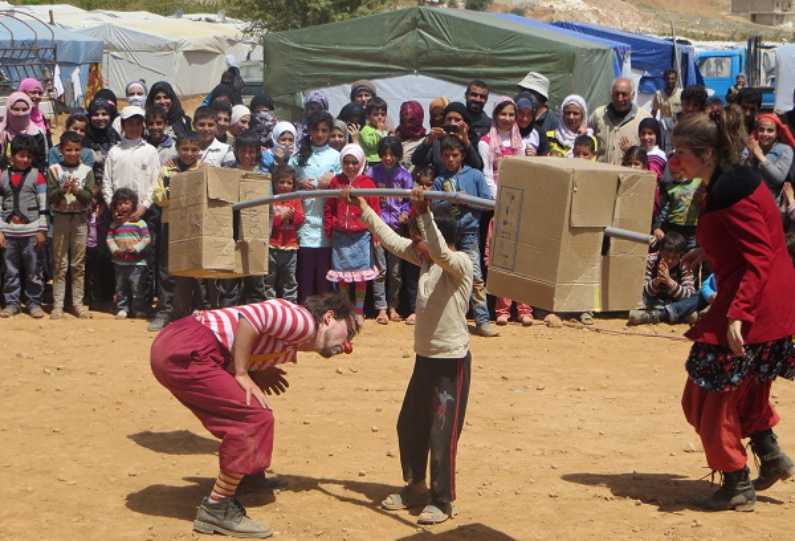 A tour is no laughing matter

CB: What is the process of planning and going on a tour?

KB: We always have local partners in international NGOs with whom we work together in the field. In the country that we want to go to, we will communicate with them and then they will organise the tours because they know exactly where we need to go. For example, in Nepal there were child-friendly zones that were created because the parents were re-building their houses, their villages, their schools that were destroyed. So they needed these zones where the children were safe and in which they could also recuperate from the trauma. The partners knew these zones were the perfect place for Clowns Without Borders to come and do their show!

CB: What are the biggest challenges you face?

KB: It can be as simple as we rehearsed in December here in Belgium in a cold room which had no heat a chord show with ropes, practising jumping rope to play in Burundi. Of course when we were rehearsing in a cold room we could jump all day, as it was great, it kept us warm. But when we got to our first show in Burundi, which has tropical climate, we were just flopped on the ground exhausted and we realised we could not jump rope like in the winter in Belgium! So we had to cut half of the jump rope stuff. Those are things you just don’t think about when you’re rehearsing, but you learn from these mistakes. The show often changes 50%.

We also find out things that are wonderful, that add to the show. In the show in Nepal they had a little boy puppet walking on a rope that created this incredible focus, people loved it! The woman who did this was a very good puppeteer, she brought this little boy to life and he was walking on a rope. Something about this fragility created an image that people just connected to. 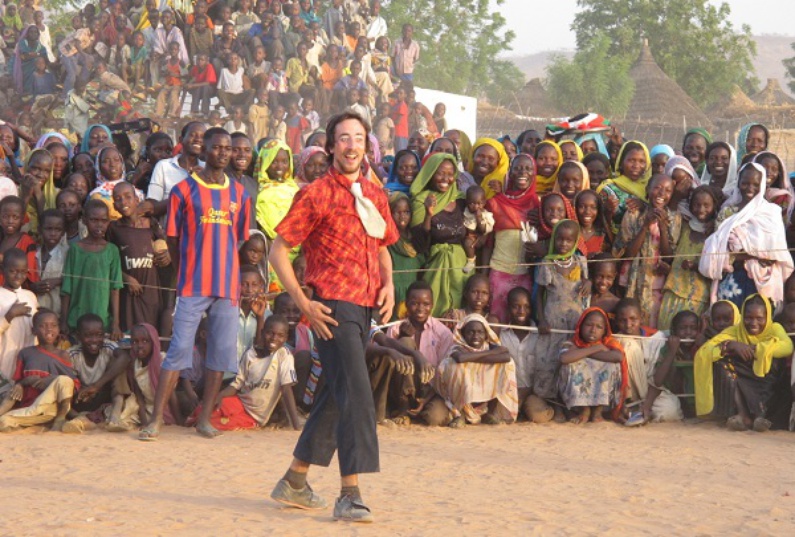 How to take a clown seriously

CB: How about the administrative aspect of a tour? Have you ever had problems with local authorities?

KB: There are lots of different situations. One situation is having formal permission to come to the village; if you come in and you don’t have the proper documentation or you’re not welcomed, that can create a big problem on the hierarchical level. This is why some courtesy visits are so important. We were actually refused entry to one area in Burundi where the head of the region was absent but the second in rank was there, but he couldn’t take the risk of allowing us to come in. We had to call the Belgian embassy who knew the head of that area and contacted him so we were finally allowed to come and play.

On another incident, we were in Chad to perform in refugee camps, so we had to do first some courtesy visits to the mayor of the village where the refugee camp was, to the head of the refugee camp and then to the head of the police or the military. We needed to have the proper authorisations of course, but they did not even know what a clown is. In French a clown is pronounced ‘cloon’. So one of the first questions a military guy asked us when we said we were Clowns Sans Frontieres, he asked “What’s a clou?” (clou means a nail, but it’s pronounced ‘cloo’ in French, so very close to the pronunciation of clown in French too) “Are you cloners? Are you nails?”, we said “No, we’re not clous, we’re not nails, we’re clowns!”. And then we did a magic trick to show him and everybody just started laughing, it suddenly changed the conversation tone. It was so much fun!

CB: Humanitarian aid is usually associated with material stuff. Have you ever been treated with scepticism for what you do?

KB: We’ve had a lot of different reactions to what we are doing. We do bring aid but it’s not an object. In one school we performed in Burundi they asked, “OK, you’ve done your show, now where is the stuff you’re gonna give us? Where are the toys?” and we said “well, we are the toys!”. The kids understand, though. They see the show and they love it and then when we come back, they remember it. Sometimes there are stories of (clowns) going back and find out that the songs we sang are still being sang months after the performance and so on. There are perks to what we do, but they are subtle. Lots of challenges as well as frustrations come from the fact that we feel that we can’t do enough. You can never do enough. You see kids playing football with plastic sacks tied together and you are thinking “What does it take to bring a box of deflated football balls, to blow and give away?”. And that’s when you realise you can bring stuff, you can do your show, you can do as much as you can and it’s still not enough. And that’s where the real challenge is. 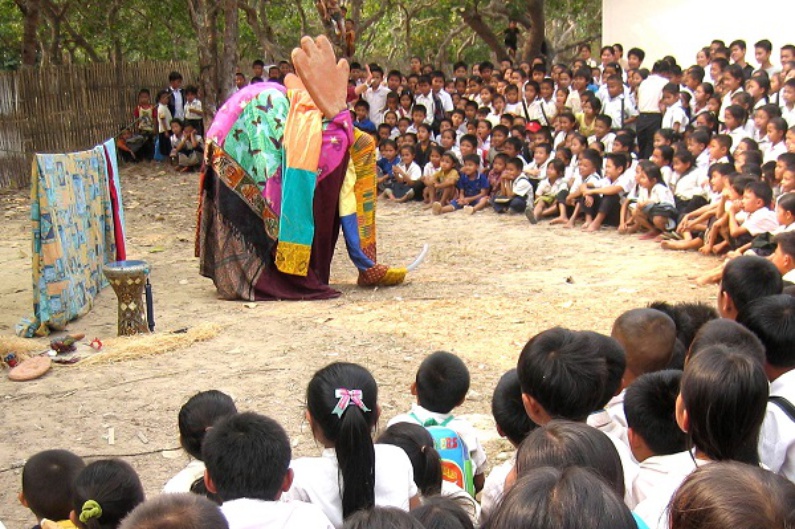 CB: You do a lot of tours abroad. Where can Belgians see performances by the Belgian Clowns and Magicians without Borders?

KB: We also have a Belgian project and that works in lots of different ways. We’ve had a wonderful project “Clowns in prisons” where the clowns went to prisons during visiting days. When a mum and her kid are visiting daddy and he’s in prison it can be a very awkward situation, so we created a little show where kids could come and see with their dads and it kind of broke the ice. We do shows for homeless families - there are centres for homeless that we perform at - or we have also played in refugee centres, we also play at the Petit-Château every a year. Often refugees find sanctuary in churches in Belgium so we have performed in these churches too – which is an incredible experience! We work everywhere, it doesn’t have to be just abroad.

CB: How do you try and break down barriers and remove stigma?

KB: There are more refugees in the world today than in any other time in history, even during World War II. 60 million refugees (Note: UN data) is just an incredible amount of displacement, trauma and instability. Integration is one of the things we want to do, create shows where local children and refugee children play together. When we played in Indonesia after an earthquake, which caused an incredible number of people to become, paralysed, handicapped and even have amputations because of collapsing buildings, Unicef suggested that we do a show with the handicapped children but involving local schools as well. This was when I learned that this interaction is a really strong and really valuable way for our performances to be used as a gathering together and for people to actually meet. So we’re breaking down the barriers, we’re without borders!

*The City of Brussels has given the Clowns and Magicians Without Borders Belgium two funding grants from the Ministry of Foreign relations, one for the tours in Lebanon, Iraq, Syria and Bulgaria (for Syrian refugees) and one for the tour in Nepal for earthquake victims.

If you believe it's worth helping the Clowns spread joy, have a look at their website and their Facebook page