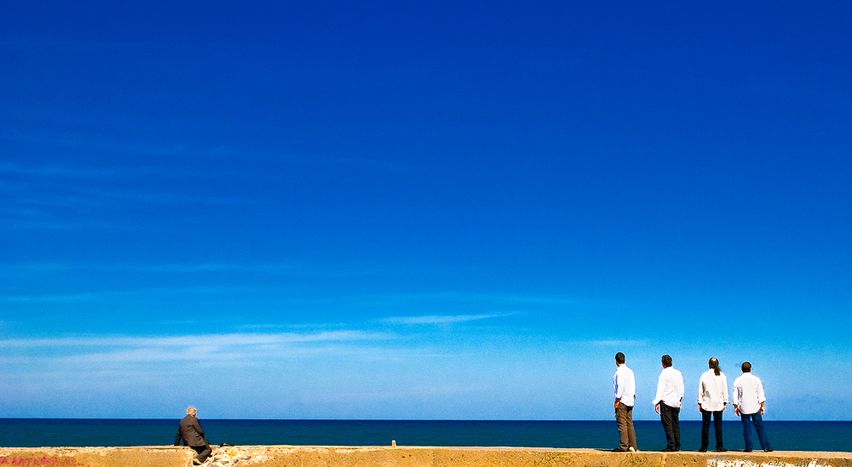 In Greece's parliamentary elections on 17 June, the conservatives emerged as the strongest party, slightly ahead of the left-wing alliance Syriza. The result, eagerly awaited across Europe, means that the supporters of the austerity programme have prevailed. Commentators view this as a clear vote by the Greeks to remain in the eurozone, noting that others will nevertheless have the final say

The desire of the Greeks to remain part of Europe was decisive in the parliamentary election, explains the Greek left-liberal online paper: ‘Most Greeks are relieved. They feel that they have emerged from a major escapade and banished the threat of a sudden death of the Greek economy. The voters have given the so-called system forces one more chance and a little more time. They don't want to sacrifice their European status in the blink of an eye. They know that it was hard fought for and shouldn't be thrown away when the first problems emerge. The Greeks don't want to lose their contact with Europe and its institutions. Mr Tsipras and his party underestimated this desire among the Greek people. But it shaped their voting behaviour’  (Antonis Karakousis)

‘Both Hollande and Spain bailout have helped give depressed Greeks a little hope’ - La Vanguardia, Spain

The generous aid for Spain's banks and the influence of the French socialists on European policy have had a positive impact on the election outcome in Greece, observes the Spanish liberal daily: ‘A few rays of light appeared on Greece's dark horizon when the socialist François Hollande - an advocate of growth incentives to complement the austerity policy - won the presidency in France and rounded off his victory with an absolute majority in the parliamentary elections on 17 June. Meanwhile, the 100 billion bailout for the Spanish banks signalled an important change in European policy vis-à-vis beleaguered states. Both Hollande and the bailout for Spain have helped Antonis Samaras give the depressed Greeks a little hope. This undoubtedly contributed to common sense prevailing in the elections’

‘Tsipras will still be there’ - Süddeutsche Zeitung, Germany

The conservative nea dimokratia (ND) has emerged as the strongest party from the parliamentary election. But a government led by party leader Antonis Samaras might not last for long, the German left-liberal daily surmises: ‘Tsipras will be quite happy being in second place because now he won't have to try and square the circle by trying to stay in the eurozone while casting the terms of the creditors to the wind. Greek media are already speculating that a government led by Samaras won't last for long in view of the unfortunate state of the country, which didn't improve one bit with election day. Once Samaras' governing skills have come to an end Tsipras will still be there, a fresh alternative who promises to let the Greeks keep on dreaming. Or get used to the return of the drachma. That's why the shrewd politician Evangelos Venizelos, leader of the pasok socialists, is calling for Tsipras to be involved in the new government - whatever form this may take. The games will go on’ (Christiane Schlötzer)

After the parliamentary elections in Greece nothing points to a governing coalition led by Nea Dimokratia being able to lead the country out of the crisis, the Czech conservative daily writes: ‘The Greeks have irrationally said: ‘Let us keep the euro but don't tell us that we're living beyond our means.’ The citizens had the choice between young radicals and the old school that landed the country in its present mess. A coalition under the conservatives' leadership will be weak. Nothing points to them managing the country any better that it has been managed in the past twenty years. The second cause for uncertainty is foreign opinion. Germany must decide whether it wants to keep Greece in the eurozone. As long as this remains unclear the Greeks may as well hold new elections every six months’ (Martin Weiss)

‘No use to anyone if middle class collapses’ - De Morgen, Belgium

The elections in Greece have exposed the divisions within the country, writes the Belgian left-liberal daily: ‘The Greek crisis is taking place in an explosive atmosphere of confrontation. Many fear tensions and violence in the country. This atmosphere is creating an emotional climate in which politicians, stock traders and citizens tend to be tempted to commit foolish deeds. To overcome this crisis the confrontation must be ended. It must cool down. This won't be easy, but there are more than enough common interests with which to begin a fruitful dialogue. All the major Greek parties are against exiting the euro and also basically agree that the imposed austerity measures should not be allowed to destroy the middle class. Yet precisely this is what is happening. It's no use to anyone if the middle class collapses and the economy falls into a deep coma. In this respect the current austerity plan can be seen as a momentous error. It's time Merkel and Co. admitted this’ (Koen Vidal)