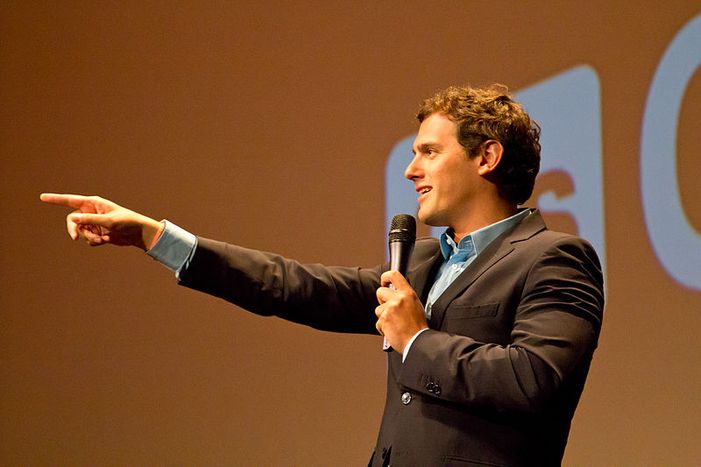 The "Orange Party", led by Albert Rivera, is one of the 4 major Spanish political powers running in the elections on the 20th December; the most heavily disputed since the Constitution was introduced in 1978.

The eruption of Ciudadanos ("Citizens") onto the political scene as a contender in the Spanish governmental elections is a phenomenon that, barely a year ago, few people would have believed.

At the beginning of 2015, the "Orange Party" held an estimated 3.1% of votes according to CIS (El Centro de Investigaciones Sociologicas) – a figure miles from the 18% predicted in the latest pre-election polls. How have they managed it? What economic policies do they put forward? Who supports this party?

Ciudadanos was formed 9 years ago in Catalonia with a clear message of Spanish nationalism in opposition to Catalonian nationalism. The party plays the ideological card in order to take advantage of the dissatisfaction that exists within a large segment of the population. Since the indignados 15-M movement started directing their protests towards political parties in 2011, Ciudadanos has tried to show itself to be a figure of political change.

"Balancing equal opportunities with the market economy," is how the deputy of the party, Inés Arrimadas, described the party's ideology when asked on the radio programme Carne Cruda, "We're neither Podemos (far-left), nor right-wing."

The statement only furthered the never-ending comparison with Pablo Iglesias' party - the other new political figure in Spain. However, we should bear in mind that in the 2009 European elections, Cuidadanos ran alongside the Libertas coalition - a party on the extreme right.

What's sure is that, despite this attempt to distance themselves from typical right-wing views, the party's leader Albert Rivera served in the youth section of the Partido Popular (the conservative "People's Party). Voters for Ciudadanos fit the typical right wing voter profile: under the age of 54, male, living in a large city, educated to university level and upper-middle class.

Their rising success in polls and at local and regional elections stems from their ability to attract young voters. They supported the Partido Popular government in the Community of Madrid, but the PSOE (Spanish Socialist Worker's Party) government at the elections in Andalucia. Young voters form an important part of the electorate with around 40% remaining undecided on how to vote at the general elections.

Their political programme is full of signs of centralism – which Spain associates with a right-wing ideology – as well as controversial statements against universal health care for immigrants, which question male violence against women and call for a greater number of security barriers to stem immigration in Ceuta and Melilla.

As if this wasn't enough, the party's financial guru Luis Garicano – former adviser for the Mariano Rajoy government and lecturer at The London School of Economics –is the person in charge of the party's financial policy. This is a party that a few months ago received approval from the country's main businesses and large media groups – which saw Rivera's party as a quiet transition away from the government of the Partido Popular, too mired in scandal.

Perhaps the "Orange Party" is aiming for a revolution. If that's the case, it's a quiet one – fuelled by the support of major towns and cities and through taking advantage of voter's dismay towards the two traditional parties in Spain, who have shared power between themselves since 1982.