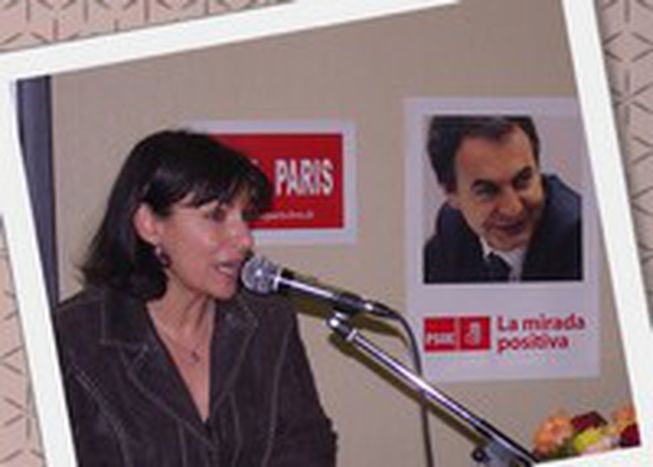 Spain votes on 9 March, and not just in Spain

'I have already prepared all the necessary papers for voting.’ These are the words of the smiling deputy mayor of Paris, and she’s not referring to the French municipal elections of 9 March. Her name is Ana Hidalgo and she is originally from Cadíz, Spain. Hidalgo, who returns to the socialist ranks of the current Parisian mayor, Bertrand Delanoë, refers to the Spanish general elections taking place on the same date. For the first time, Spanish residents outside their country can participate in the legislative elections that select the Spanish president, without voting by mail, but rather, by voting at their consulate office.

In this sense, Hidalgo’s future was declared on 9 February at the capital gala, during a pre-electoral ceremony of the Spanish Socialist Workers' Party (PSOE) packed with Spanish expatriates. From within the international groups of this Spanish party, PSOE-Europe includes all its European regional associations outside of Spain, such as those of Paris, Brussels and Berlin.

This many-tentacled organisation, which exists throughout Europe, is mirrored in the activists of the United Left party through the communist party of Spain, created by the two million political and economic exiles that the country produced between 1936 and 1976. However, the People’s Party (PP) – the conservative opposition – can also claim votes in Europe. On 30 January, their Spanish presidential candidate Mariano Rajoy received the public support of German and French presidents Angela Merkel and Nicolas Sarkozy, during a multitudinous ceremony of the rightist French UMP party. The latter wished Rajoy success and invited Spanish voters in France to help him attain it.

The seed of European transnational activists

These Spanish political activists in Europe are not only preoccupied with Spanish political issues, but are also transferring proposals for common policies to the leadership of their parties, ‘above all, in terms of judicial cooperation between the states,’ explains José Rojas, the secretary general of the PSOE-Paris. ‘For example, when a French judge grants the guardianship of a disabled Spanish child, the Spanish authorities will recognise this said decision without waiting for another Spanish judge to grant it.’

Now, the European socialist party (ESP) is being moulded into an organisation of militants instead of a group of national parties: how are national parties being organised abroad? ‘Even though the current progression of the ESP must be for the final goal of the socialist left,’ continues Rojas, ‘many reactions will arise, since the socialist parties in Europe still, today, have many concerns that are exclusively national and they have distinct election calendars.’

The next step: an expatriates’ constituency

The government of Spain is now proposing the creation of an exclusive constituency for Spanish citizens living abroad, which amount to ‘about 1.5 million,’ confirms Bernardino León, the Spanish secretary of state for external affairs. We could be talking about 15 seats out of a total of 350, little more than what current prime minister Rodríguez Zapatero needs to win a complete majority. This is the same measure that Italy has applied since the last legislative election in 2006, the same that lifted Romano Prodi to the position of prime minister with a lead of only 20,000 votes ahead of his rival, Silvio Berlusconi.

Meanwhile, the election campaign in Paris is also at the mercy of many citizens living abroad in the rank and file of the parties. In one of their districts, the UMP conservatives introduced none other than justice minister Rachida Dati, who hails originally from Morocco. ‘We are, above all, Portuguese, Maghribian and Chinese,’ Ana Hidalgo points out, in contrast with the records of the left. Can she conceive of the possibility that, one day, the mayoral office could be held by a non-French? ‘I don’t know. But someone that is French as well as another nationality would be perfect,’ she confesses with a conspiratorial wink. Could that be the sly declaration of the mayor’s successor?