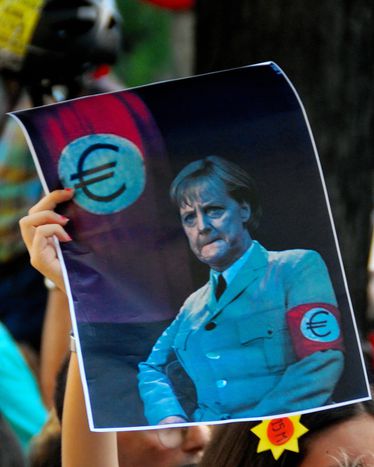 Spain through the looking glass: towards a bailout or #Merkelgohome?

'From Germany you come to Spain, great and glowing, long live your strong bank! Olé  Draghi and troika and the Deutsche Bank! We receive you, Angela Merkel, with joy! Olé to risk and olé to premium!' This song, an adaptation of a well known scene from the film Welcome, Mr Marshall (Berlanga, 1953), has become the theme tune to the 15M protest movement, which has recently taken over Spain

Spanish protestors have changed the title of the famous film 'Welcome Mr Marshall' to 'Unwelcome, Mrs Merkel', with a little, if not all, of the sarcasm implied in the original. Just as Lewis Caroll created the the unbirthday in Through the Looking Glass, Spain has invented the unwelcome.

'Merkel, go home!' read banners strewn throughout the streets of Madrid. Someone with plenty of time, energy and motivation has distributed them all around the city centre. Banners have even ended up in front of the headquarters of the Spanish conservative party Partido Popular who have been in power since 2011. This has not been the only anonymous protest against Merkel's visit of the 5 September 2012, also known as the Spanish-German business summit, in which Spain's almost definite bailout was undoubtedly discussed. The first to meet at the summit were the businessmen and only after them, the Spanish and German heads of state. This fact is curious and perhaps a little encouraging. 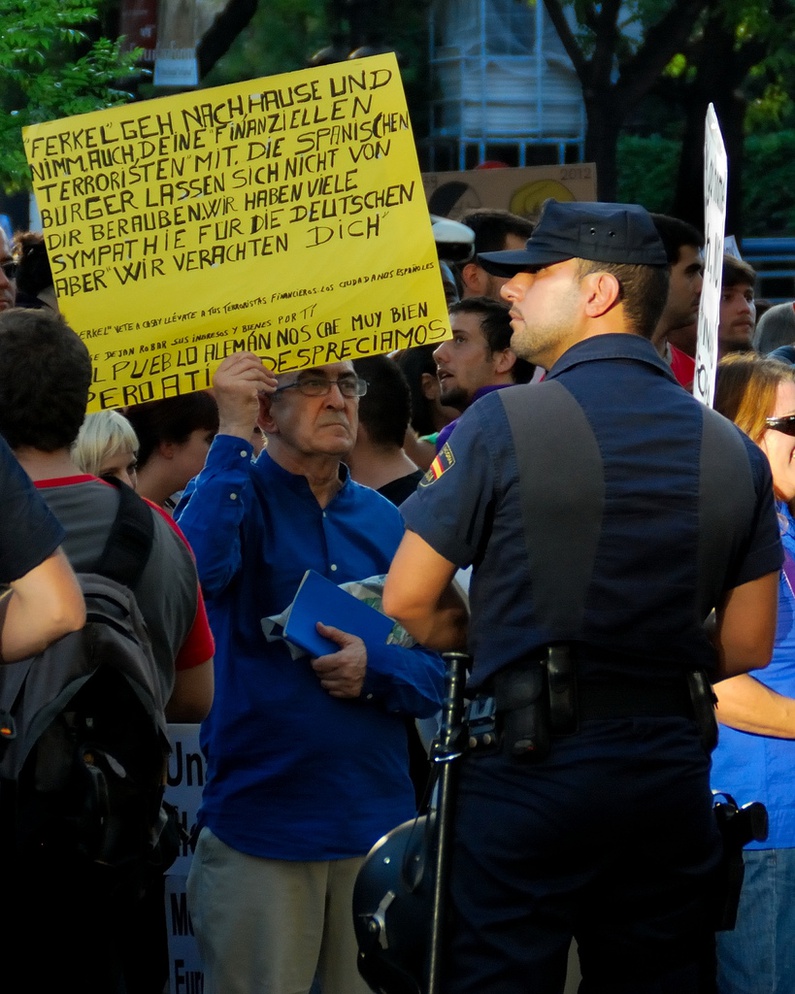 A hundred German and Spanish businessmen, high-powered government ministers, syndicate representatives and the Spanish minister of economy were all present at the meeting. The latter, Luis de Guindos, opened the 'business summit'. According to a statement issued by the minister , he used the only two trump cards that Spain has to receive the bailout in conditions that won't be excessively draconian. Firstly, the sacrifice that Spain is carrying out to solve the Euro crisis 'through initiatives such as a political consolidation and a tax agreement for all public sectors, as well as the implementation of structural reforms and the elimination of obstacles in the way of business.' And secondly, the fact that Spain is an attractive tourist destination for Germans.

Citizen movements including ¡Democracia real ya! (Real democracy now!) and 15M, called for a protest in front of the European Commission headquarters in Spain to 'give Mrs Merkel the symbolic welcome that she deserves: a loud and firm rejection of the neo-liberal politics and ideologies that she wishes to impose on us. Merkel wishes to impose cutbacks on our basic rights, condemning us to misery even though we are  not the ones responsible for the frauds carried out by financial entities, European institutions such as the European central bank, and other governmental entities that act as accomplices to this social genocide.' The protest movements proclaim: 'This is not a crisis, this is fraud!' (Es ist keine Krise, es ist ein Betrug!) and 'this is not a crisis, this is robbery!' (Es ist keine Krise, es ist ein Betrug!). All in the style of Berlanga's Welcome. Mr Marshall.  To sum up: #Merkelgohome.

As if all this wasn't enough, while Rajoy and Merkel are once again facing off, this time in Spanish territory, Draghi is thought to be about to propose a plan for gaining unlimited bonds, without injecting more liquidity into the system, during an important meeting that will take place with the European Central Bank in Frankfurt. In fact, the banking entity seems to be receiving a lot of suggestions lately: the Organisation for Economic Co-operation and Development has declared that they should pay off some countries debt, like Spain's, and Rajoy has asked them to 'dissolve the uncertainty as soon as possible,' as though it were a sugar lump. The situation is, on the other hand, rather bitter and we would require many spoonfuls of sugar to swallow the conditions that a bailout implies. The businessmen, along with Merkel, have arrived.