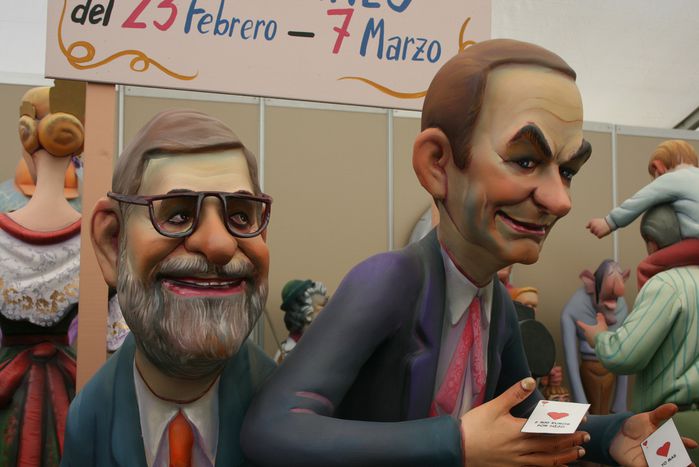 On 22 May the Spaniards go to the polls to choose the future politicians of their autonomous communities and town halls. It's a key moment before general elections in 2012, but the government's management of the crisis and the recent passing of the Sinde piracy law has roused rebels and protestors, who are locking down over the internet. Perspective

Resignation (resignación) and surfeit (hartazgo) are the two most common words for the Spanish population at present. However, and unlike their French or Italian neighbours, they do not swamp the streets to demonstrate. According to the last barometer of the CIS (centre of sociological investigations, an entity contributing scientific knowledge on Spanish society), 80% of the population highlighted unemployment as their main concern. There was already a record-breaking 4.3 million unemployed in February 2011, making the unemployment rate one of the highest in the EU.

With 40% unemployment among young people, many have decided to spend less money on partying to go to German classes instead

Unemployment in Spain is a problem which does not discriminate by age or profession. With 40% unemployment among young people, many have decided to spend less money on partying to go to German classes instead, clinging to the hope of forming part of that group of Spaniards which Angela Merkel, the German chancellor, has promised to take with her to her country to work. That is why in some classes, one does no longer speak about the opportunities for work, but of 'what Merkel said' at a summit in Madrid in February.

After unemployment and the economy in general, the Spaniard’s third concern is political class. The causes of this deterioration are various, the main one being the level of national corruption, which even has its own wikipediapage.

The main protagonist of a young but also amateurish Spanish democracy was the burst of the property bubble. When important urban scandals were discovered, a number of politicians were supposedly implicated. Since then, the Spaniards have become accustomed to having breakfast with news from the police going into various town halls to check their accounts.

The traditional two-party system between the opposition popular party (PP) and ruling socialists (PSOE) has been agitated by scandals and traumas which changes the government every few years. It does not seem to be in top form either. New social movements are being created online as a consequence of public discontent, like Nolesvotes ('Don't vote them'). This website calls for a change in the configuration of the chambers and to impose harsh sanctions on the most important parties in the ballot boxes (PP, PSOE and the Catalan conservatives or CiU), and give power to other political parties. Whilst the most recent voting intention polls favour the current opposition party (with a difference of ten points against the PSOE), all the national politicians receive a grade of four and under from the citizens. Enrique Dans, one of the ideologists of Nolesvotes, explains the launching of a counter campaign 'so that people do not vote for the parties which have proved that they legislate against the interests of the people.'

According to Dans, a professor at the IE Business School and a recognised blogger, the main aim of this movement is to 'show discomfort against a way of making politics' and that 'you can't govern against those who have voted you'. This group is quite annoyed with the Sinde piracy law, which was named after the culture minister Angeles Gonzalez-Sinde and which allows illegal download websites to be closed. They want to encourage people to reflect on it. This law was qualified by some countries as 'weak'. 'It is an absurd law which is not well made,' says Dans, who calls it the 'last straw' and calls to 'regulate and adapt the intellectual property to nowadays'. Meanwhile, the United States points out Spain as a paradise for piracy. This text, which was approved with the votes of the PP, POE and CiU, constitutes the final second regulation of the law of sustainable economy. It has generated numerous debates amongst web surfers and industry. It even led to the resignation of the president of Spain's film academy, Alex de la Iglesia, who succeeded Sinde and publicly protested his dissatisfaction with the law.

Is this law the icing on the cake and the surfeit that the Spanish live with every day? This will be confirmed on 22 May when local elections will show what level has penetrated a pessimistic environment which can leave the most important political parties in a very difficult situation.