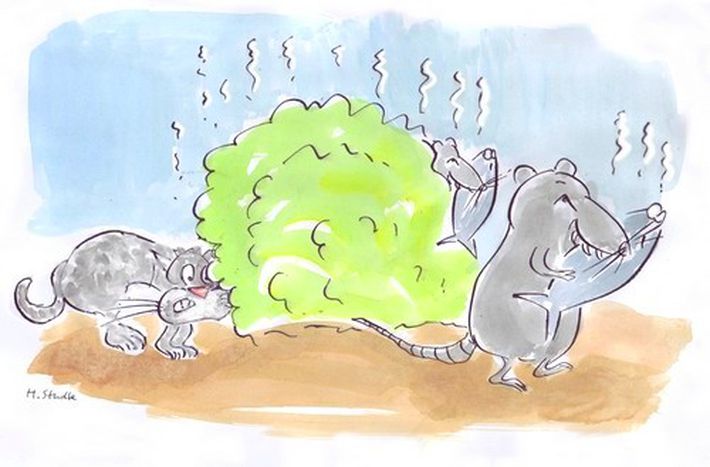 Something fishy going on

When the Spanish suspect something they speak of having la mosca detras de la oreja ('the fly behind the ear'). In France what they have behind their ears is a flea (avoir la puce a l´oreille), and in English we smell a rat. Indeed the theme of smell is often used to express suspicion: in Spain they smell a corpse (huele a muerto) or chamusquina, that is to say they smell something burnt – as in the French expression with the same meaning: sentir le roussi.

As we know, in English when we suspect something we smell something fishy. Speaking of fish, animals - in additon to smell - are a common theme in all languages when expressing suspicion. Thus, after having a fly behind their ear, the Spanish conclude that 'a cat is being kept locked up' - hay gato encerrado. In Italy the fishiness is also associated with a cat in the saying: qui gatta si cova, 'there is a cat hiding here'. The Portuguese, however, find 'there is an animal baby in the thicket' (nesse mato tem cachorro). The French prefer the English fish theme and insist 'there is an eel under a rock' (avoir anguille sous roche).

Let's not try and explain these idiomatic differences between languages or we just might go crazy 'as goats', as they say in Spanish (como cabras), or end up having bats in the belfry. In such cases of lunacy, the French speak of having 'a spider on the ceiling' (avoir una araignée au plafond). That is to say, we are either 'missing a screw' (nos falta un tornillo), or we 'have a loose screw' (eine Schraube locker haben), depending on whether you speak Spanish or German.