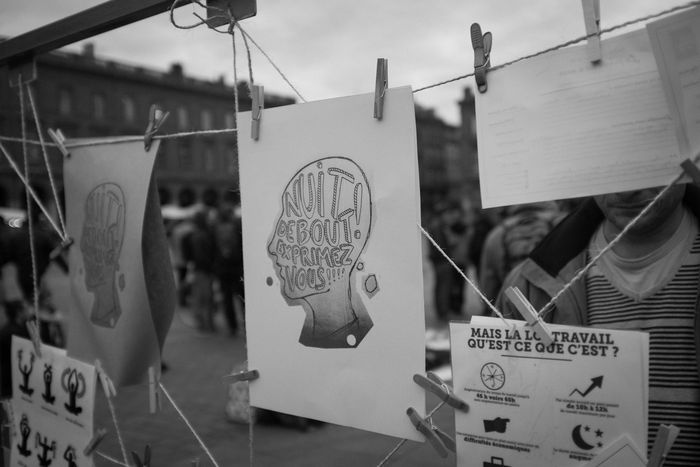 Social Movements in Europe - Will they achieve political change?

Social protests are more and more common in a crisis-ridden Europe. But will achieve real political change?

Nuit Debout, the Indignados in Spain, or the Occupy movement - more and more people take the streets to protest against the continuous state of crisis Europe finds itself in.

Indeed, with Schengen at the brink of collapse (if it hasn't already failed), the Eurogroup struggling to keep up a crumbling monetary union, or the Brexit, our continent has seen better days. The failure of our national politicians and the EU to respond effectively to these new challenges has resulted in the rise of populist parties on the right, which have been successful in creating political programmes based on fear, reclusion and a medieval understanding of national sovereignty.

However, things also have started to change on the Left, with people going to the streets to preserve the last remains of social democracy in Europe.

In 2015, the radical left-wing party Syriza won historical elections in Greece after six years of austerity measures and more and more Greeks protesting on the streets. With more than a third of the country's total population classed as being "at risk of poverty or social exclusion" in 2014, the Greek population voted for change. However, in 2016, the Tsipras government had no other choice than to accept yet another package of austerity measures in order to continue to receive money from the Troika.

In Spain, the "Indignados movement" began exactly five years ago in 2011, protesting against the high level of youth unemployment, the lacking economic opportunities and the rising inequality in their country. They achieved to bring the street movement into the Spanish political institutions with the creation of the political party Podemos. This socialist party was founded in March 2014 and gained in popularity, so as to gain a huge share of votes in the 2015 elections.Whether they will manage to enter a coalition with the socialist party and establish themselves as a radical alternative to the main parties is unclear, as their political momentum in December 2015 seems to slowly fade away.

Finally, the "Nuit Debout" movement in France began as a protest against the new labour law proposed by the Socialist goverment of Hollande, but shows above all the disenchantment of the French with their political elite. Now going on for over a month, with many working groups discussing various policy areas (tax evasion, TTIP, unemployment, the securitization move in France, etc.), we will see whether the protest movement will achieve to come up with viable answers. However, due to rigid two-party system in France, it will be difficult for a new Left to enter the political sphere. Another question is whether the majority of the Nuit Debout protesters are more inclined to revolutionary ideas than to promote change from within.

Indeed, it is much more difficult for Left protest movements coming from the streets to manage to transform their ideas into viable political programmes, as those are not based on fear and exclusion, but rather look for progressive alternatives.

However, there are good reasons for Lefties to be optimistic, as a few neo-Marxist leaders have experienced unprecedented support: In the UK, Jeremy Corbyn was elected Leader of the Labour Party in 2015, slowly reforming a Labour Party which had lost its identity since Tony Blair’s “New Labour”. In May 2016, the Labour candidate Sadiq Khan became the Mayor of London despite a sickening smear campaign against him by the conservative candidate Zac Goldsmith. Whereas he might not be as much on the Left as Corbyn, it is a sign of change when Labour wins London, where financial sector is particularly present.

Finally, it was across the Atlantic that the biggest surprise came from. In the country where socialist ideas are dismissed as "communist craziness" since the McCarthy era, Bernie Sanders rose to fame whilst focusing on issues such as social inequalities, racism, gender discrimination. A truly anti-establishment candidate, he managed to be a fierce opponent to Hillary Clinton in the primaries, despite the lack of support by super-PACS. With is “Feel the Bern” slogan, he gained huge popularity among young voters.

These are good examples to show that all hope should not be lost on the Left – neo-Marxist ideas can enter mainstream politics, the same way as social protest movements in Europe can provide viable political alternatives. Rather to see times of crisis as a negative development, groups on the Left should now come together, use the political momentum, and create a vision for a Social Europe, as no one else will do so. The DiEm25 for instance, is an attempt to do so.