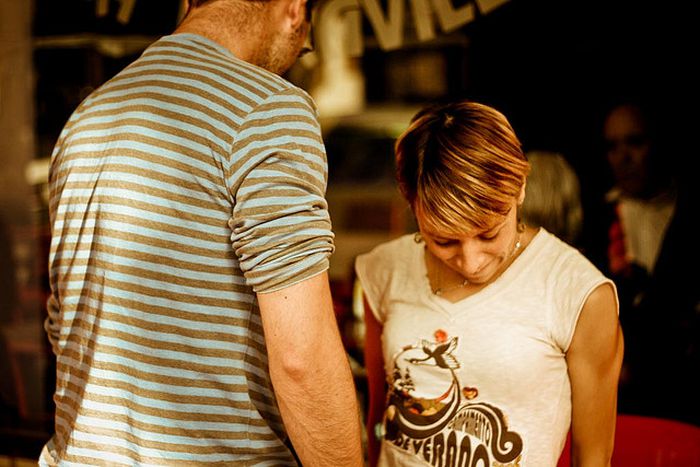 So Much for Subtle: Call for a New Form of Shyness

Rumour has it that German men can't flirt. Should they ever try their luck, it often comes across as too subtle for most women. Why is it that we always perpetuate the same clichés about men and women? We turn the tables by calling for a new form of shyness.

A couple days ago in the metro somewhere in Berlin-Friedrichshain. The clock reads 2:15 am, the majority of the people in the crowded train cars are either completely exhausted or drunk. I'm sitting by the window between a drivelling dog and a snoozing grandma. Then it happens, just in front of the Frankfurter Tor, that a young man and woman board the metro. Every now and then he awkwardly tries to rest his hands on her hips. But he can't manage. Either the railway shakes or a dog ambles in between them. Then there's another passenger's excessively large backpack that gets in the way. She smiles and tells seemingly funny stories. He lets himself be jerked by the train to the other side and shyly stares out of the window into the endless dark train tunnel. 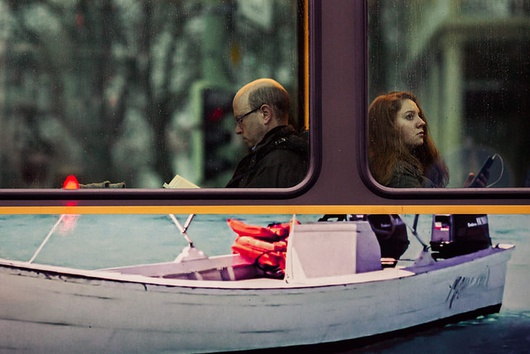 I watch for about ten minutes, but then it starts to seem stupid. Will they ever get down to business? Even a blind man with a cane could tell that they like each other! Why won't he wrap his arm around her hips, why won't she take his hand, when oh when will they finally kiss each other? At this point everyone in the train car is watching this despair-filled plot. Then the unimaginable happens at the next stop; she smiles and says, "See ya! Was a lot of fun." The next moment she's already disembarked. Left behind is a seemingly sad young man. And a bunch of people who would love to whack him over the head.

Too subtle or simply misunderstood?

What's going on with these German men? Why are they so utterly incompetent when it comes to flirting? That's a good question, and in light of the examples against German men one might as well start planning to move to Spain. A favoured apposing argument in this context is the claim that German men simply flirt with more subtlety than Spaniards or Frenchmen. What women perceive to be disinterest is in fact a burning, but sadly misunderstood, passion. This rumour surely stems back to the band Wir sind Helden's (We are Heroes, Ed.) single Aurelie (2003). But just because they were once considered cool, doesn't mean that their aesthetics of subtlety is right. After all, and this is true, Germans aren't more subtle when it comes to flirting, even if that's the claim of a one German band. They're simply shy, which is actually something really great.

Let me repeat: Shyness is great!

Who says that everyone has to be direct, determined and extroverted? That sounds more like a an empty statement from an inane letter of motivation. Why should you kiss me? Because I'm direct, determined and extroverted. It's the only way you can know where you lie! That superficiality is something boring is something we've long known. Shouldn't indirectness, secretiveness and shyness be more alluring, all of which are able to surprise and fascinate us, and knock us off our feet? That's the question I ask my friend Giulia, who moved to Berlin from Italy just a few months ago. "There are few different ways to flirt. You don't have to immediately be as explicit as Italians." Most of the time Giulia isn't so sure where she lies with German men, but she doesn't really think that's such a bad thing. "It's so to speak the fascination of men who are confident with themselves and who don't deem it necessary to build up their egos by successfully flirting." Yea yea, shyness can be fascinating. 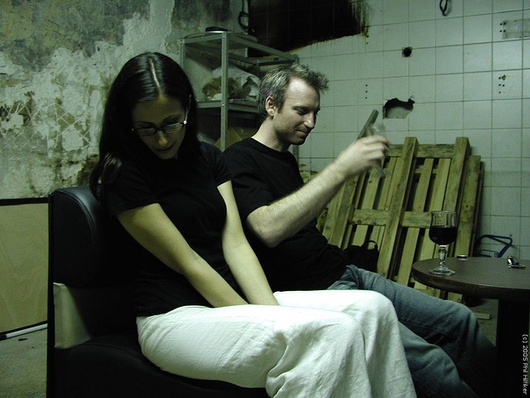 That German men are better than their reputations is also verified by Sini, who originally comes from Finland, but grew up in the USA. "Over the past years I've lived in a number of different countries. In Berlin though, I've been spoken to by men with the highest amount of reservedness." Sini thinks Berliners are great, and that opinion wasn't changed by a longer stay she once had in Spain. "I prefer the Germans. When a German guy pays me a compliment, then he actually means it." Often, a glance or a smile is enough to lure German men. A further benefit to shyness: it's akin to friendliness, at least most of the time. Those who are shy when flirting are less likely to kiss the woman they have their sights on without warning. After all, woman often become frustrated when the boundaries they've drawn aren't respected. With shy men, women run less of a risk, given of course that there isn't too much alcohol inolved. Accordingly, she might just have to whack him on the head — or simply take his hand.

A small success is better than none

To get back to the couple in the metro: Of course, I'd love to recount how he fearlessly jumped off of the train as the doors threatened to close, and chased after his damsel with long leaps. That they kissed each other on the platform in front of everyone on the train and went off together into the night. But sadly, he didn't do that. Instead, he just sat composed next to the snoozing grandma. But for all we know, he had her number, which might have been enough for him, as a shy guy, to feel like he had a small success that night. Maybe his flat was simply untidy. Shy men are, after all, often pragmatic. Next time things will surely work out.

Addendum: Shy men aren't of course a monosexual species. There are just as many shy women. The call for a new form of shyness also applies to women. In the end, we wouldn't want to spread any dumb clichés.

Flirting in Berlin: A thing or a Sham?