Smile! You’re in the midst of a revolution!

After years of placid tolerance, Ukraine seems to be kicking up a fuss – much to its own surprise. A Ukrainian in Poland gives his version of the latest events 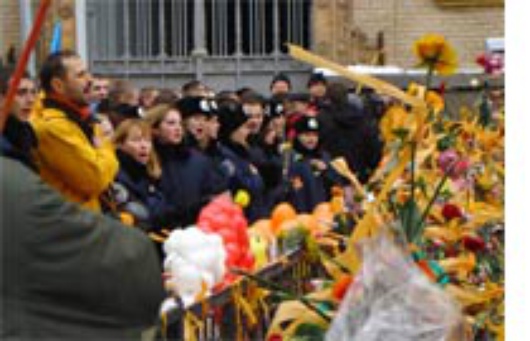 I had only just begun to write this article when my neighbour came and distracted me. He burst into the room and cried, “Some Polish musicians are going to Kiev to perform in Independence Square. There are a few places left on the bus. You have 20 minutes to pack your things!” As soon as we had crossed the Polish-Ukrainian border I noticed the orange-coloured ribbons which had been tied to almost every single car aerial. Orange has become the symbol for the almost surreal atmosphere of solidarity, unity and freedom amongst the people of Ukraine. One can see this colour everywhere: on trees and posts, on peoples’ clothes and even on mannequins in shop windows. This revolution has not split society - quite the contrary, there is an incredible unity between rich and poor, between Orthodox and Catholic, between Ukrainians and Russians. It is a revolution for something, not against anything. Everyone, whether young or old, has taken to the streets to say goodbye forever to the post-communist government.

The tenet of the revolution in orange, “We are many and we are unconquerable!”, marks the birth of a fully-fledged political European nation. Ukrainians are changing from sullen, grey citizens, plagued by insecurity and doubts, to people enjoying and embracing life. This unbelievable transformation is taking place in Kiev, right before our very eyes. Hundreds of thousands are marching around the clock in rain and snow. All this has been happening for the past ten days, without a single violent incident having been reported. Yanukovich’s followers, pressurised into travelling to Kiev, are being welcomed with open arms and taken care of by the opposition under the behest of their leader. It does not take long for them to remove their scarves printed with the words “For Yanukovich” and to dress in orange. One of the central paroles of the orange revolution is “Smile! You’re in the midst of a revolution!”

The grey area of Donetsk

This mood has spread to the whole of the Ukraine – except for the industrial region to the east of the country. In this region around Donetsk, Yanukovich’s alleged electoral victory is accepted. It was here that election rigging and manipulation were at their most widespread and carried out with an indescribable cynicism: there were warnings that all coalmines would be closed should the opposition win, warnings of fascism and the ‘sale’ of the country to the United States. All this was hammered into the people in this region for months, until it had become anchored in their minds. In addition to this, the government increased pensions and grants. This economically fatal step was a cunning election strategy which could, however, result in inflation. It is in this region that the government, which has gambled the country away, would like to play its last trump card – the idea of separatism. With the support of President Kuchma and Russian politicians such as the Mayor of Moscow Mr. Luschkov, the local government is trying with all its might to convince the people to support the division of Ukraine into two separate states.

The constant lies and provocations have, however, to all intents and purposes, backfired. The persona of the leader of the opposition, Yushchenko, has proven to be central to this. Despite being the victim of moral and physical attacks (in September he was the victim of an attempted poisoning), despite attempts by the media to discredit him and despite being betrayed by many allies, he has not once retaliated. Honesty, professionalism and social integration continue to be his mantra. Already today Yushchenko is being hailed as the Ukrainian Vaclav Havel. So as to facilitate his victory, Ukrainians must convince their fellow citizens in the Donetsk region to free themselves from their imposed blinkered vision and mentality. Volunteers from all over have agreed to travel together to the Donek region and to explain Yanukovich’s position to the people there. Common sense and humour will prove to be the most effective weapons of the Ukrainians.

Translated from the Russian (to German) by Maria Zurkan