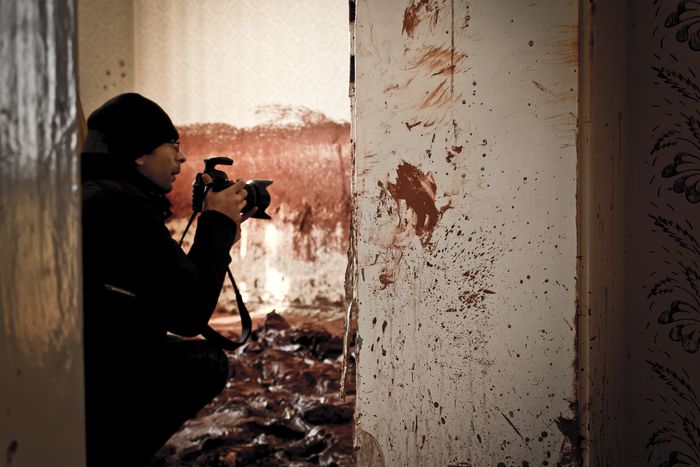 Flour, lemon juice, vinegar, mineral water, detergent, wheelbarrows, gloves, face masks: it's not a shopping list but some of the donations urgently needed by the victims of the environmental catastrophe. cafebabel.com visits the area affected by the toxic sludge to find out how Hungarians have been helping their fellow countrymen

The village of Kolontar, 4 October 2010 – a day seemingly like any other. In one house a couple is making pancakes. At 12:25, the dam holding back a huge reservoir full of toxic waste from the local aluminium plant bursts: within a few seconds, almost a million cubic metres of toxic material escapes from a hole in the reservoir measuring several dozen metres across. A two-metre high wave of red mud heads straight for Kolontar, barely a kilometre away. There is no time to flee or rescue any belongings. A father dashes into his child’s bedroom, scoops him up off the floor and places him safely in a wardrobe high up by the ceiling. A moment later, the red toxic mud invades the house, covering the man up to his neck. The flood overwhelms Kolontar and the neighbouring town of Devecser, with the whole world staring in disbelief as Europe’s biggest ecological catastrophe since Chernobyl kills ten people, injures 150 and destroys 400 homes.

After a few weeks, the global media spotlight has turned away from the chemical spill tragedy to other stories. cafebabel.com investigates whether life in Kolontar and Devecser can ever return to normal. We're standing in the middle of the hole in the side of the reservoir, where construction teams are working round the clock in six shifts to repair the damaged drive shaft and to dig a one-and-a-half kilometre long safety channel. The reservoir still contains nearly 2.5 million tons of toxic material. 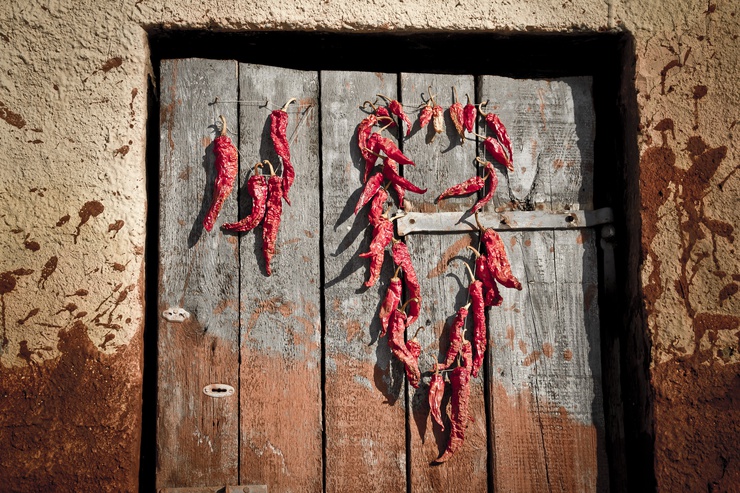 The red mud is industrial waste generated during aluminium production, an insoluble sediment containing titanium, sodium and silicon oxides as well as the iron oxide that gives it its reddish colour. A chemical analysis carried out by Greenpeace has shown that, in addition, 50 tons of arsenic, 300 tons of chromium and 500 kilograms of mercury have escaped into the environment. However, the biggest problem is that the mixture is highly alkaline – with a pH as high as thirteen at the time of the leak.

Coming into contact with the substance can cause serious chemical burns to the skin resulting in wounds that can take a long time to heal. The injured include not just residents of the flooded area but also members of the rescue teams. Attempts to stem the leak using concrete and acetic acid begin as soon as it is sprung. It will not be possible to cultivate the land in this region again until at least next summer. The leak has also completely destroyed life in two rivers. 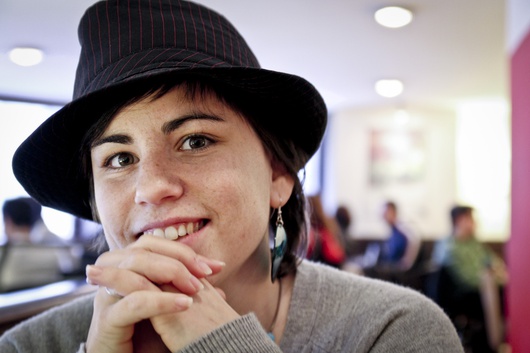 We travel down the red road to Kolontar, where the signs of the disaster have largely disappeared. The heaps of sludge have gone from the streets and pavements. Whereas before this was a village of a thousand people, it now seems deserted. In the temporary Red Cross centre, volunteers are handing out aid packages to families and loading them into a van. 'There have been a whole load of civic initiatives,' says Andrea Donner, a campaigner for Kidma Hungary, a Jewish organisation set up to help young people over the age of eighteen. 'I decided to help the victims of the catastrophe and, together with my friends, organised fundraising, which we advertised on facebook,' she recalls. 'I talked to rescuers on the ground in order to find out what the victims needed most.'

As it happens, a lot of people have been helping victims of the disaster through small-scale initiatives because they want to know how the money they donate will be used. They have not trusted the Red Cross or national fundraising efforts. It still remains to be seen what the funds raised in this way have been or are being allocated to. Sources indicate that they could be in the region of 4.3 million euros. Unfortunately, not all such civic actions have been as successful. Hungarian painter Gabor Suveg decided to gather together three hundred artworks from a hundred artists and sell them via online auction with all proceeds to go towards helping the victims. However, his noble actions met with little interest and raised only a token amount of money.

'How old we are hasn’t been important, or whether we’re jews, christians or muslims, left or right-wing'

Meanwhile, the young volunteers led by Andrea succeeded in raising around 200, 000 forints (724 euros 0r £619) and securing donations worth over 300, 000 forints. (1, 086 euros or £914) This money was used to buy essentials, with everything then being loaded into a lorry and transported to the town of Ajka for sorting. Andrea is pleased that 'a tragedy on such an unprecedented scale makes the differences between people disappear. How old we are hasn’t been important, the same goes for whether we’re jews, christians or muslims, or if we’re left or right-wing. The whole country is united by our desire to help.' 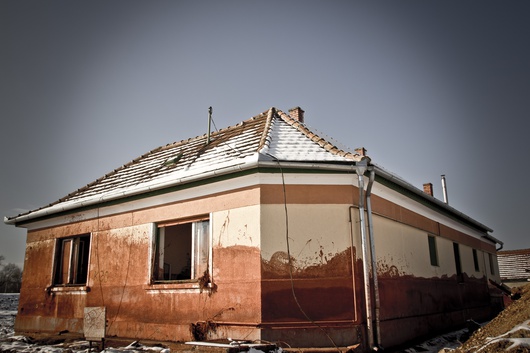 In Kolontar, we discover that many families have ignored advice to stay away and have returned to their homes with no intention of leaving. They do not like hearing about how the sludge dries to form a dust which can enter their respiratory system and which is even more dangerous. However, some people from Kolontar had nowhere to go back to. 'The toxic mud eats into the walls, floors and furniture, making houses uninhabitable. The houses that were caught up in the flood have been razed to the ground,' says Officer Attila Vezendi. Pointing to a solitary building still left standing, he tells us, 'We are leaving this one as a memorial to the catastrophe.' We step inside. It looks as if barely a few days have passed since it was engulfed by the sludge. Inside a huge hole in one of the walls, which by some miracle had not yet collapsed, an image of Jesus has been left hanging. Officer Peter Meszaros tells us that a retired couple used to live in this house. The husband died in hospital from burns. 'His wife was found in a field near the farm – she had drowned,' the officer says. 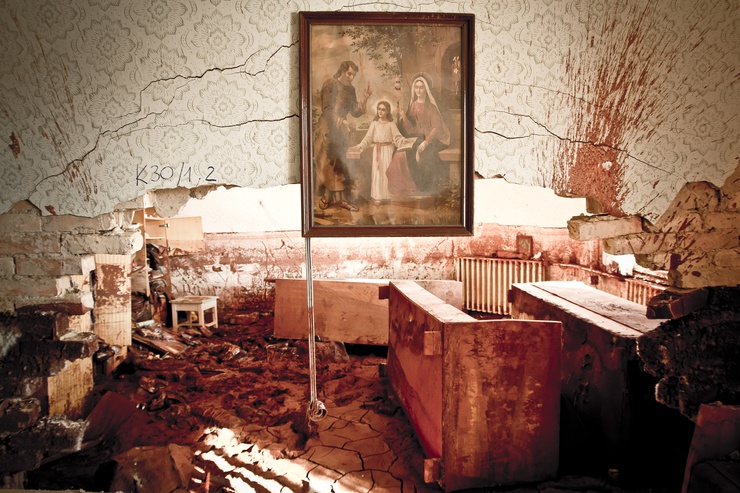 We return to Budapest wearing military rubber boots. The guards have said that, following our visit to the contaminated area, our shoes were now deemed to be toxic waste. So they stay in Kolontar – together with the residents whose lives were ruined at 12:25 on 4 October by the red mud.

First published on cafebabel.com on 1 January 2011

Special thanks are due to Veronika Kovacs and Lili Szilágyi and the rest of the cafebabel.com team in Budapest for their help in compiling this report and to Aleksandra Sygiel for waiting for the text so patiently. This article is part of cafebabel.com’s 2010-2011 feature focus on Green Europe. Watch this space for Green Brussels, Green Berlin, Green Rome, Green Seville and Green Paris