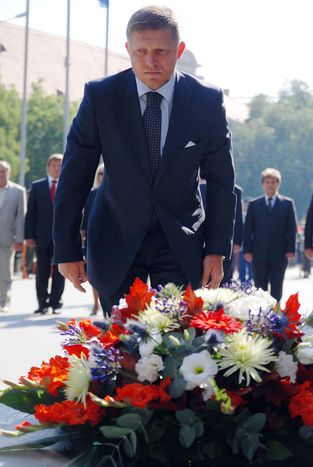 Robert Fico's social democratic party Smer emerged from Slovakia's early elections with an absolute majority on 10 March, while the ruling conservatives lost two-thirds of their electoral base. Fico must put aside his arrogant, populist ways and tackle the rampant corruption in the country, say the European media

In his second term of office the populist Robert Fico must show he is now ready up to the task, writes the left-liberal Austrian daily: ‘Whereas Hungarian prime minister Viktor Orban has become embroiled in conflict with the EU, Robert Fico is steering a clearly pro-European course, although the bailout for Greece is anything but popular in his country. All in all the topic played almost no role in the election. The apparently gigantic corruption scandal - the dubious network of relations between politics and business that was exposed through wire taps - overshadowed everything else. That didn’t harm Fico, although his role too (as former prime minister) is very much in need of investigation. The winner takes all - in this case responsibility. That responsibility is all the larger since for the time being there is no opposition to speak of. The former populist must finally show he’s on the road to becoming a statesman’ (Josef Kirchengast)

Slovakia won't suffer the same fate under the one-party government of Robert Fico as its neighbour Hungary has under Viktor Orbán, journalist Jiří Pehe asserts in the Czech left-leaning daily: 'Vaclav Havel once said that every post-communist country needed two revolutions: first one against communism and then one against post-communism. Slovakian has gone through both - the velvet revolution in 1989 and the revolution against Mečiarism. Consequently the country is more modern than Hungary. Fico also proved himself to be a quite pragmatic during his first term in office (2006 - 2010). True, he had problems with the media, but he never exhibited any markedly authoritarian tendencies. His government led Slovakia into the eurozone, avoided the temptation of conducting irresponsible experiments and never lived above its means. Slovakia's clearly pro-European stance was helpful here. Although it is always tempting to abuse an absolute majority Slovakia is not automatically facing the same fate as Hungary'

The clear victory of the left-wing populist Robert Fico is reminiscent of the election triumph of Hungarian prime minister Viktor Orban, comments the left-leaning German daily: ‘What is driving the voters into the arms of populists like Orban and Fico in Hungary and Slovakia is the anger at what former Czech prime minister Vaclav Havel once callled ‘mafia capitalism‘. What he was referring to was the scheming of a small clique from politics and business that is systematically undermining, or rather flogging off the state. What remains is the fear that Fico - like Orban - could exploit this anger to appease the people with populist phrases and play the nationalist card, only to take advantage himself of the ‘mafia capitalism’ at the same time. Without a developed civil society and without an effective democratic opposition Slovakian democracy will have a hard time’ (Alexandra Mostyn)

‘Fico got over a million votes, a quarter of adult population’ – Sme, Slovakia

After social democratic opposition leader Robert Fico's landslide victory in the Slovakian elections on 10 March, the Slovakian liberal daily hopes he has learned from the mistakes of his last term: ‘The weak result of the incumbent coalition parties and Fico's clear victory gives the winner a high degree of responsibility. Now the key issue is not only whether Fico's party can meet the economic challenges, but also whether it really has adopted social-democratic values. Whether it approaches minorities or Green issues with sufficient openness. Whether, conversely, it adopts a less arrogant, nationalist and confrontational attitude to the media and its critics in general. Fico's party may have received over a million votes, corresponding to roughly a quarter of the adult population. But the others three-quarters didn't vote for it’ (Zora Bútorová)

After the clear victory for the social-democratic party Smer in Slovakia, the Hungarian conservative daily is delighted that designated prime minister Fico will rule without the extreme-right Slovak national party (SNS): ‘What will Fico's second government bring? The future prime minister has diplomatically labelled his programme pro-European, and he has promised his solidarity withdebt-stricken Europe. With the help of the rich he wants to bring the state finances back under control, he rejects privatisation and he favours large state investments. In view of his absolute majority the most likely outcome is that Smer will govern alone, even if a coalition can't be ruled out. A one-party government is far better than a coalition with Ján Slota, who wanted to send Slovakian tanks to Hungary under the first Fico government. For Hungary in any case it is a source of satisfaction that Slota and his national party didn't make it back into parliament' (István Pataky)