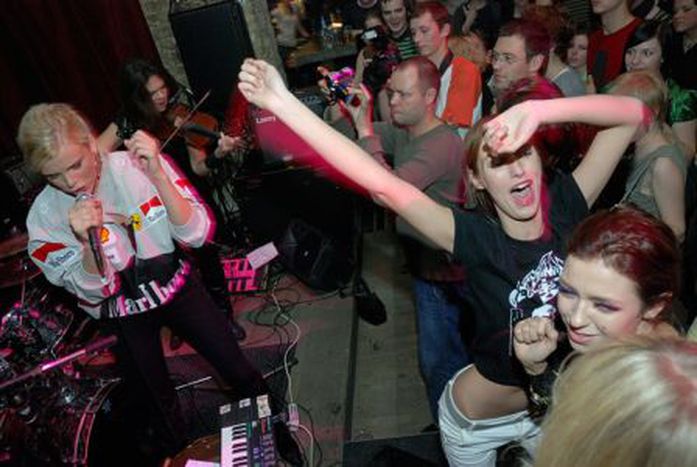 If you survived to the party, now it's time for sitting and enjoying the movies...check out the program here!And don't forget about sunday...!I guess a large number of the people who joined the party in Von Krahl last night woke up with a serious headache this morning...

Drinks, music, gags, auctions and audio/video performances helped everyone to leave snow and cold outside and celebrate the opening of the festival in a great way: a really international crowd filled the theater/club as in its best times and the evening offered by Sleepwalkers organizers is surely one of those everyone will remember for a while.But as the festival is not only drinking and smoking in a cold courtyard - security yesterday really did its job...I can assure you it was almost impossible to smoke inside - let's give a look to today's programme15:00 VON KRAHL THEATRECompetition program I "Women! Men!"17:00 VON KRAHL THEATRECompetition program II "Crazy, crazy!"19:00 VON KRAHL THEATREFFFor-est – selection of the best films in the history of the Karlovy Vary Student Film Festival Fresh Film Fest.20:00 CINEMA SÕPRUSEUROPEAN BEST SHORT FILMS OF THE YEAR II (Short film Nominees for the European Film Awards Prix UIP 2007)21:00 VON KRAHL THEATREEstonian TV ads21:30 CINEMA SÕPRUSEUROPEAN BEST SHORT FILMS OF THE YEAR I ( Short film Nominees for the European Film Awards Prix UIP 2007)Hope to see you all in SÕPRUS for the European best short movies for discovering what the guys we all met yesterday in Von Krahl are able to do when holding a camera in their hands!