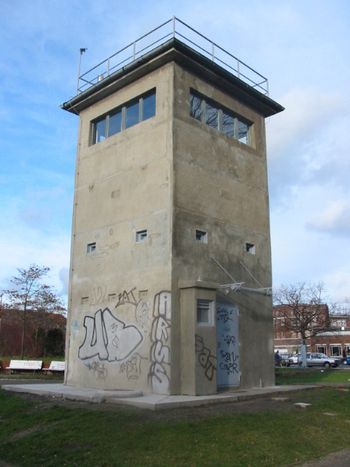 Small, cubic and holding an entire period of German history, how the landmark in Berlin came to be

You almost don’t notice the watchtower. As you approach Schlesischer Park, tall trees throw shadows on the pathways along which Berliners calmly stroll. It is difficult to imagine that this was once one of the points of separation dividing Berlin into two with the wall and its death strips. The tower looks even less convincing when it suddenly emerges from behind the bushes. It is small and grey, except for the colourful spraying covering the first 1.5 metres of the cube. Unexpectedly, the tower has an art exhibition, an activity which has prevailed in the tower since the fall of the Berlin Wall in 1991.

This 10 metres high tower, built in 1973, was responsible for eighteen other nearby watchtowers. In the beginning of the nineties it came close to being torn down like most of the other sinister relics of the city’s division. The GDR (east German) government assigned the border troops to dismantle all the border check plants in Berlin. The move was supported by public opinion. As Dr. Hubert Staroste from the Berlin Monument Authority explains, ‘there were hardly any attempts to preserve them as historical sites.’

The grey monument survived the wave of destruction thanks to the Museum of Forbidden Art (‘Museum der Verbotenen Kunst’) association. The soldiers of the tower passed it to Kalle Winkler, a Berlin punk, songwriter and the founder of the museum when the border patrols ceased on 1 July 1990. The officers gave the tower to show that they are willing to keep the peace, explains Roland Prejawa, an active member of the former association. But it was a long fight; back then, it was forbidden to give military property to a private citizen. Furthermore German law stated that everything built on the land belongs to the landowner. Since the land was owned by the state, it was their property. 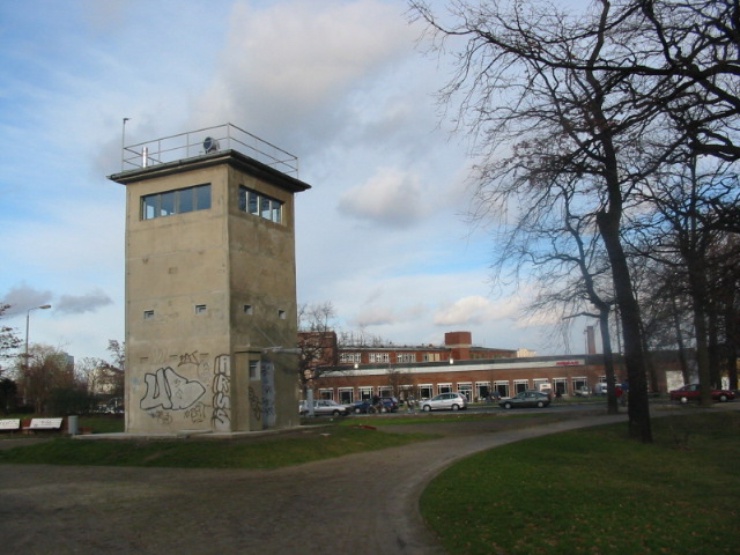 This policy began to change alongside public opinion after the first years of the Wende (reunification). People started to recognise that despite painful memories of this epoque, these monuments were an integral part of German and European post-war history. In 1992, the Schlesisches Busch watchtower passed under a monumental protection, with the association acquiring the property. ’We wanted to make it a meeting point for western and eastern Berliners,’ elaborates Prejawa, ‘since this was the first point in the city that was opened alongside the likes of Checkpoint Charlie.’

The Museum of Forbidden Art organised exhibitions and kept a cafe in the tower. They showed forbidden art from the DDR and demonstrated how the border worked. In the beginning the Berliners were passionately interested about each other. But the curiosity for the novelty waned with time; by the end of the nineties, most of the visitors were tourists. The museum continued to exhibit until 2004, when they ran out of money and had to return the tower to the government.

A new chapter in the history of the tower began under the auspices of the art association Kunstfabrik am Flutgraben e.V. The Berlin authority was out of ideas but wanted to continue artistic activities. Since the Kunstfabrik’s idea pleased them the most, the association started its exhibitions at Schlesischer Busch from 2004. The idea was to keep the tower open to the public; not simple, since the main characteristic of the tower was that it was closed, explains Svenja Moor, art curator of the project.

‘Dorle’ is an ongoing exhibition about a woman who was arrested and then ‘invited’ to work for the Stasi (‘Staatssicherheit’), the official secret police of east Germany, after an attempt to escape from the DDR. Artist Christine Berndt knew Dorle personally. For her, the main theme of the art installation is an inner conflict. It is a conflict for the viewer tpp. ‘It is difficult to make a judgment. Dorle is innocent and guilty at the same time,’ Berndt explains. She points out the shape of the tower and the closed space inside the monument, all of which convey the feeling of the inner prison that Dorle had. ‘It was an inner prison for border soldiers who were forced to work there too. They feared, ‘what to do if my friend will try to escape? Should I shoot him?’ In a way, the watchtower presents the DDR repression.’

The Dorle exhibition evokes various reactions in visitors. Some don’t like the music, some are surprised to find an installation where they expected to find something more historic. ‘People forget too quickly but the wall is part of German history,’ comments Marc Hall, an American tourist visiting Berlin. In the end, they all agree that art exhibitions are a good way to link the past with the present.