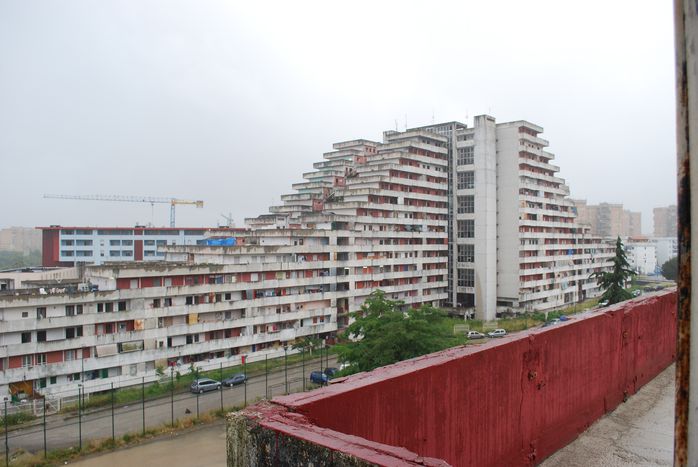 Scampia, Naples: the suburb of dreamers

If hope is, as they say, the last thing to die, there are many other things which die first: wealth, love, and certainly dreams. Yet in Scampia, the notorious Naples suburb, the dreamers have not yet admitted defeat - quite the opposite

Like a scene from a film, with evil lurking just around the next corner, the rain comes down in torrents here in the Naples suburb of Scampia. The ceilings of the run-down tower blocks - known as ‘Vele’ or ‘sails’ because of their shape - are leaking. The raindrops which fall from one metal support to the next make the clearly audible noise of a dripping tap. The supports run from the flats to a walkway, which seems to hang in mid-air above a virtually covered courtyard. The walkway ends in stairwells. From outside, the concrete blocks are largely inaccessible, with only relatively narrow doorways leading in. It’s dark, but the dilapidation is obvious: several windowpanes have been smashed and not replaced and many of the doors are broken.

Not just a filmic backdrop

The film Gomorrha, based on the book by Neapolitan journalist Robert Saviano, was brought to life against this backdrop in 2008. In Scampia a bloody gang war rages. More than 70 people died in confrontations between the various clans of the Camorra, as the 'mafia' here is known. Scampia became a symbol for urban decay across the world. Add to that the area’s abandonment by the political powers that be and the lack of prospects for the people who live here, and you get the picture. ‘It’s a scandal,' exclaims Mirella La Magna, a resident who has lived in an old farmhouse just ten minutes walk away from the Vele since 1972. ‘The media came because of the dead on the streets, but all the young people who hope only for a normal lives, their dreams and their life projects have been taken from them – these things are dead as well, aren’t they? No-one is interested in them, though.’

Mirella La Magna and her late husband Felice, who died in 2004, founded the Gridas Centre in 1981. The name, which roughly means ‘group for awakening from dreams,’ evokes the purpose of the group. The aim is to make dreams come true with, among other things, aerosols, paints and brushes. The activists discuss how a better city could look and paint their conclusions as murals - a form of graffiti art - on the walls. Thus, for example, a picture of an accessible park was born on the walls of an old cemetery, which is closed to the public. The Gridas activists personally describe their work as ‘utopia’, even though a utopia is usually considered to be unattainable, Mirella La Magna believes that the opposite is true. ‘My dream, when it’s just mine, remains a dream, but when many people share my dream we can turn it into reality.’ History proves her right, at least occasionally: today the cemetery is open to the public. Paul Schweizer indirectly continues this tradition. In 2009, the 24-year-old student came to Scampia from Tübingen in south-west Germany for the first time. Since then, he has returned every year for three to four months. Just as during his first stay, he ventures with the neighbourhood children into the lions’ den. They take an abandoned flat in the Vele, clean it up, and paint the walls with their dreams. Afterwards, the children play with the painted televisions or bookshelves. 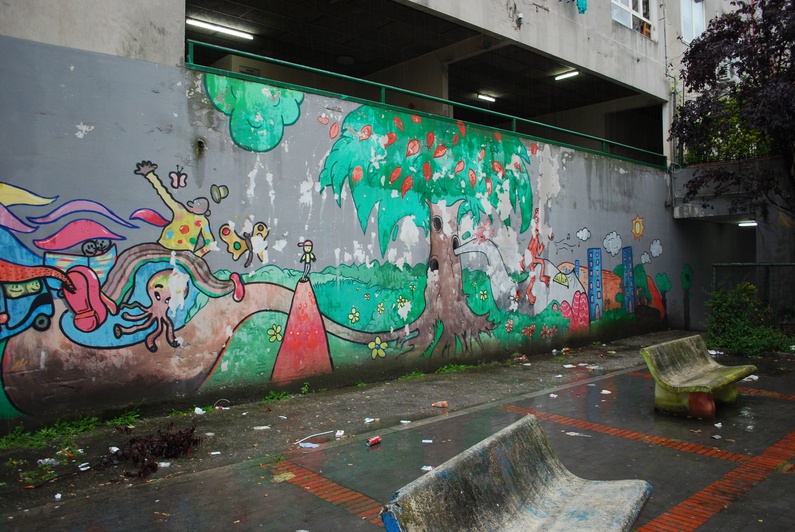 'SEA OF BLOOD AND SYRINGES'

The mammoth activists are also dreamers to some extent. Their logo is a mammoth sporting an umbrella and a flower on its tusks, with the phrase ‘utopia doesn’t live on the moon’ emblazoned above it. Their organisation pitched its tents right in front of the Vele in the Johannes Paul II piazza in 2007. Their aim is to bring the people of the neighbourhood together, to push back the Camorra and to create alternative work. Back then, the piazza was occupied solely by junkies who sat there shooting up. Nobody else came here voluntarily. Mammoth founder Giovanni Zoppoli remembers it being a ‘sea of blood and syringes'. The organisation changed all that: they opened a library, organised doctor’s visits, established a recording studio, lent out bicycles, and it was open to everybody, every day. The no-go area became a meeting place.

However, dreams can be broken. The Gridas Centre is threatened with the loss of its premises. The mammoth organisation in reality has its subsidies blocked by the city (which is supposed to pay up), with the constant invention of new bureaucratic requirements, says Giovanni. The centre has therefore mostly been closed since the spring. It has not been possible to regularly pay the employees’ wages for two years. Broken windows have been only temporarily repaired using plywood. 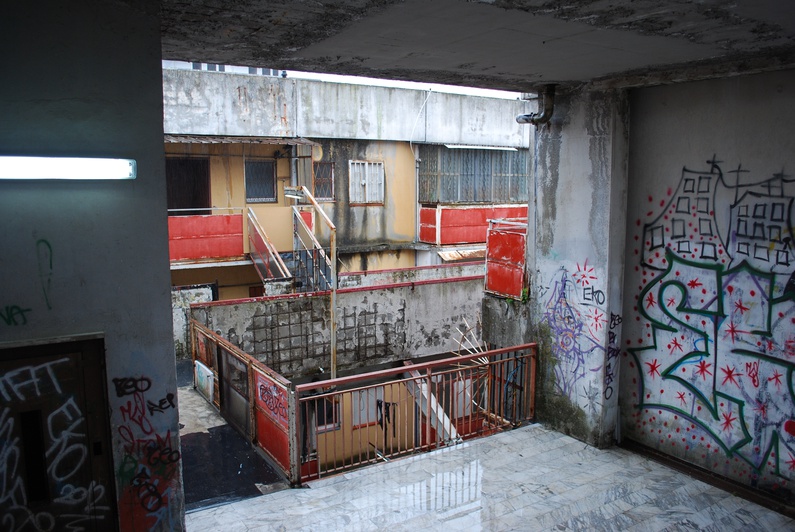 However, it is also in moments just as these that the results of years of work begin to reveal themselves. Young people who used mammoth as a rehearsal space have found new premises at the university, reports Davide Zazzaro, a member of the organisation and a native of Scampia. It is still unusual for suburban youth to become active in such a manner.  A few years ago, it would have been unthinkable.

In recent years, the camorra has been weakened by arrests. There are plans to replace the Vele with more welcoming buildings. Three tower blocks have been demolished, and the fate of the remaining four also seems to be sealed. Nevertheless, it remains uncertain whether or not the dreamers will really be able to permanently change the neighbourhood. Unemployment remains high; official documents put the figure at more than 60%, although accurate figures are difficult to pin down due to a lack of accurate population data and illegal employment. 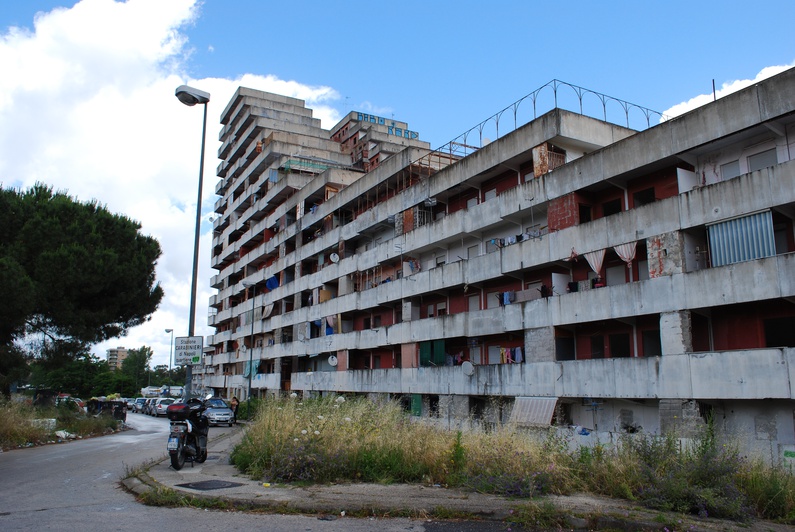 Whether or not things are changed in the long-term by his commitment isn’t actually all that important to Paul.  ‘I don’t come here because it’s a notorious area in need of change, but because I have fun here,' he says.  ‘I have my own problems, even though I’m obviously in a much better financial situation than the children. When we paint together we all forget our problems whether they’re big or small.’ In that moment, short as it may be, ‘the world is better’.

A huge thank you to the team at cafebabel Naples, especially Mario Paciolla and Erica Prisco