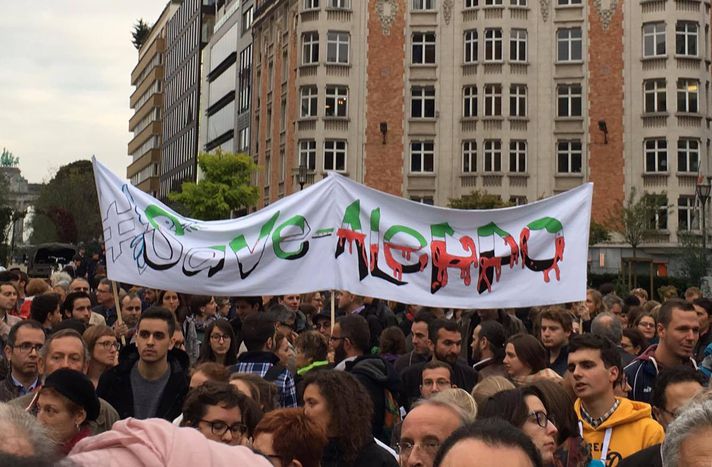 “SAVE ALEPPO” Rally: Inaction No Longer an Option

October 4, Schuman Roundabout, Brussels – Cafébabel Brussels was live at the “Save Aleppo” rally on Tuesday – an event organized by Action Syrie. Several hundred people were there to show their support for the children of Aleppo.

Late-afternoon, at 5 :15 pm, with Eurocrats looking out the window toward the Schuman Roundabout, wondering what was going on, the demonstration organized by Action Syrie was well underway – to call for the rights of Syrian civilians and support the people of this country devastated by war and terror. The event was particularly dedicated to the children of Aleppo and other Syrian cities affected by airstrikes.

The demonstrators, including young Syrian refugees recently arrived in Belgium, read texts in Arabic and French condemning the Syrian regime and its allies, notably Putin. They also chanted in protest and laid down a white sheet, creating a shroud for the children of Aleppo killed in the last few days.

The youngest, certainly, are the ones that suffer the most. For five years, they’ve been victims of brutal attacks led by their own president and his allies, as well as by the terror group Islamic State. According to UNICEF, one in three children have known only war. Additionally, about 500 children are said to have died in the Mediterranean Sea. As one of the demonstrators put it: “What you see at the doorstep of Europe is a massacre; it’s time to stop with this killing and no longer remain apathetic.” 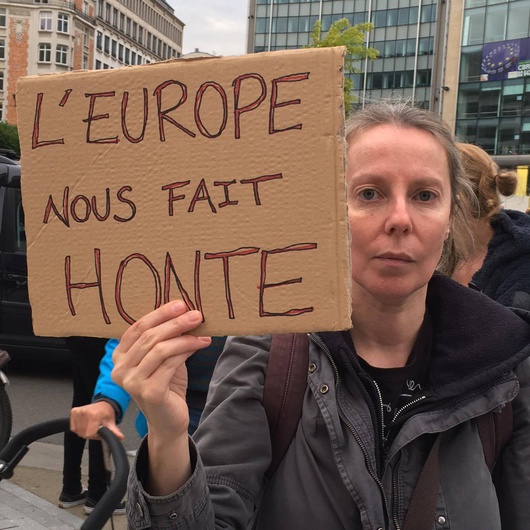 This week, the Council of Europe also hosted an international conference on Afghanistan, organized by the European Union and the Afghan government. The event brought together 75 countries and 26 international agencies. Action Syrie took the opportunity to organize this rally in support of Aleppo and its citizens. While there, the staff of Cafébabel Brussels had the pleasure of meeting Benjamin Peltier, one of the rally organizers. 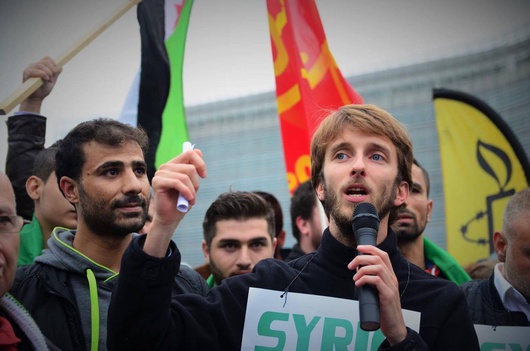 Cafébabel: Can you tell us about Action Syrie? When was the organization created and what are your objectives?

BP: Action Syrie is a group of Belgian citizens that was formed in 2011 at the beginning of the Syrian uprising. The idea was to counter the fairly widespread apathy among the public in the face of the events in Syria, despite having followed what had happened in Tunisia, or Egypt, for example.

So we told ourselves we needed to inform people about the situation. That’s when we decided to create a group to try to provide news about the Syrian conflict. But we soon realized that informing wasn’t enough, that we needed to take it a step further and mobilize people. So we started organizing rallies.

At the beginning, we thought it might last a year. But now, we’ve been around for five.

Cafébabel: Why did you decide to organize the rally today?

BP: We chose today for various reasons. Mostly because the international summit on Afghanistan is taking place, and John Kerry is in Brussels. So there’s a symbolic aspect. Additionally, demonstrations were held across Europe and around the world throughout the weekend. We didn’t have time to organize something then, but wanted a date close enough to still be a part of the global movement.

Cafébabel: Are you supported by other organizations?

BP: Yes, today we were joined by many other organizations, like Amnesty International, Syria: A Visa, A Life, CETRI (Centre Tricontinental), etc. That allowed us draw a larger group.

Cafébabel: Do you have any other activities planned?

BP: I don’t have specific dates, but we have a whole series of activities planned for the year, including a showing of the latest Netflix documentary on the White Helmets – Syrians that rescue the injured from the rubble after airstrikes.

BP: Yes. The ones present today are Syrians that have arrived in Belgium little by little over the last five years, many of them this last year. That’s one of the factors that has allowed us to raise more awareness with the Belgian public. Belgians have now met Syrians that have told them: “Yes, we have a problem at home. Our primary problem is the regime that has been killing us for five years.” The arrival of Syrians with the wave of migration last year really raised awareness with the Belgian public. You can really see the difference. 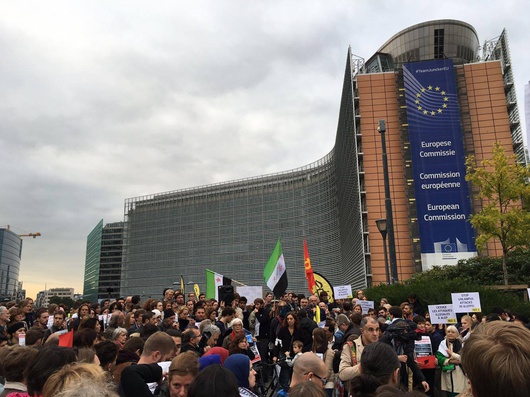 Translated from Rassemblement «SAVE ALEPPO»: l'inaction n'est plus une option