These days, it's film frenzy in Berlin again. Berlinale, the city's famous film festival is under way. This is the first part of a special series on cafebabel.com's Berlin blog, in which three Babel reporters will cover a not so well-known aspect of the festival.

It's called "Berlinale Talent Campus", a forum for 350 young filmmakers from all over the world to present their works, meet each other and improve their skills during various workshops.

by Lena Meier and Paula Martinez 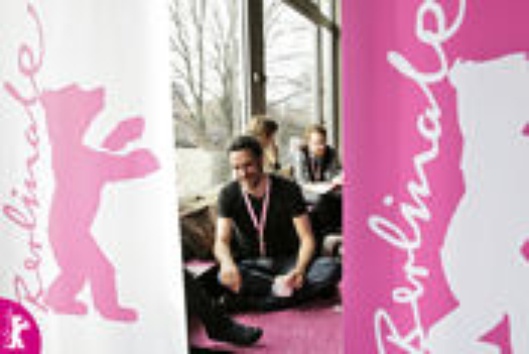 It’s all pink, it’s amazing and it’s all about meeting: the 6th edition of the Berlinale Talent Campus. 350 young people have come from all over the world and are eager to meet each other: script writers want to meet screenwriting experts and filmmakers. Filmmakers want to meet producers. Actresses want to meet filmmakers with new ideas and a fresh way of realizing them.

My Life in Campus-Pink: Talent Campus participant enjoying a sunny moment in the magenta-hued lounge of HAU2. And we want to meet the talents: For example Breeze from South Africa who attracts attention with his rasta hair-do. He is a documentary filmmaker who, in the past, has examined themes like black consciousness in Johannesburg. By using hip-hop as a film language he wants to break the rules of documentary filmmaking and make it more interesting for his generation: “People love to see movies but they don’t want to see anything didactic.” At lunch we get to talk to Alberto who came to do his first film because he was commissioned by a NGO to tell a story of post-war Bosnia. The topic of his latest project is also a socio-political: women’s rights in Morocco. The culmination of all meetings is the first round of the Speed Matching: about two hundred talents sit in two lines facing each other on cardboard stools on the main stage of HAU2. The setting is pink. The air is vibrating with one hundred conversations. After three minutes one line moves one seat to the left – new partners, new topics. Janine Marmot from Skillset. introduced the game with the assumption that many participants are shy – it seems that she is wrong. Everyone is talking and gesturing, greeting, taking pictures and exchanging email addresses. In the lobby outside, three guys hang out on the pink bathroom-carpet-like platforms. The sun sends rays through the big windows. Although Gabriel, Carlos and Rezwan missed the speed matching for today, they were still able to meet each other and meet us as well. They come from Mexico, Ecuador and Bangladesh and all of them are directors.

Registration Day: Fresh off the plane, train and bus. Campus participants register in HAU2. “It’s easy to make films in Bangladesh because there’s always a lot of stories to tell in a third world country”, Rezwan says. His latest short shows the huge gap between rich and poor, high tech and rural living. Berlin impressed him with its mix of modern and old. Carlos is interested in socio-political issues. His documentary Taromenani tells the story of a disconnected tribe in the Amazon and was already shown in Berlin at the human rights festival One World Berlin. In the end the first day of the Talent Campus was proof that it's the best place in town to meet the coolest people. And as Alberto said: “The Talent Campus is important because the most risky thing in filmmaking is to become lonely”. 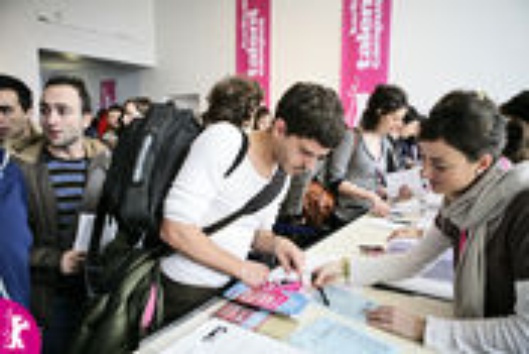