1962. More than 8000 miles of journey on foot from India to the capitals of the former Allies. Four bags of tea to be delivered to the leaders of nuclear powers : France, UK, USSR, USA. One message : “When you think you need to press the button, stop for a minute and have a fresh cup of tea”. Probably to most of us sounds like a farytale. For Katish Kumar is the story of his life..

The author of 'No Destination',  a former Jain monk and later follower of Gandhi's movement talks to cafebabel.com about Europe, Greece, and gives another viewpoint to the ''clash of civilizations''. He insists that borders are not a solution and that West needs a little...oriental spirit.

How do you see Europe after actually walking  on this content? How do you feel? Have you seen any common things? 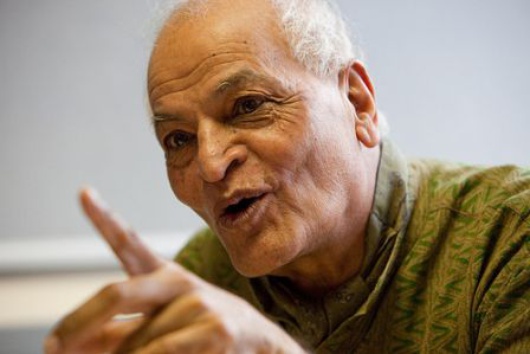 Once Mahatma Gandhi was asked : Mr Gandhi what do you think of western civilization? And his answer was '' I think it would be a good idea''. So what we call civilization is not enough civilized. Europe now is at a turning point. Europe has led the world into a material prosperity. They have introduced technology and science, business, market economy at the cost of environmental degradation and destruction. So when I come to Europe I think that Europe needs an amount of Eastern wisdom of Tao, of Buddhism where we say that we are all related we are all connected. With that confluence of East and West, of Europe and Asia it can take place. East needs West, west need east and when they come together they can transcend their division and can create a harmonious civilization which looks up to intellectual world, which looks up to human world. At the moment, human world tries to dominate the natural world.We think that all the nature there, is only for us. We can use it as we like- we can destroy it, we can pollute it, we can use as much as we want for our benefit. That has to change. And we have to say we will have to respect nature. And that will be a great European civilization if we can learn to respect the natural world. Europe is a very beautiful continent. When I came from India I saw such a beauty, so much greenery, beautiful mountains, such great rivers, such great forests, such good land. Among them I ve met a traditional sort of arts and culture, painting and music, that is the true civilization in Europe. And that's the civilization we need to respect and promote. Europe needs more to promote its arts, its culture, its music rather than just trade and industries and destruction of the natural world. So the European culture is its philosophy, its arts, its music. That's what I like the most.

The big issue in Europe is whether it has borders or not . Do you think that Europe has borders? And if it has where are these borders?

I dont believe it. I think that we need to open the borders. Europeans went around the world. Europeans went to the american continent. The Americans didn't said ''do not come in, we have borders''. There would be no Europeans in America. Europeans went to South Africa and other parts of Africa and they went to India and everywhere. So,  if Europeans could go everywhere, then why others cant come to Europe?  We need to see the whole world as one family. All the world is one family, and the whole Earth is one community. Not only a European community but an Earth community. European community is part of the Earth community. If we become exclusive and say ''we shall remain we, and you cannot come in'' that will not create respect for Europeans. People in Africa and Asia will think that ''Europeans are very shelfish. They are very narrow-minded. They have been to the whole world, they have amassed all our wealth, they took everything from us and now stop us from coming to their continent. But they want us to buy their goods, and have their trade but they do not want us as people.'' You cannot have free trade and no free people. So borders are not such a good idea.

Are you afraid that we are moving towards a more homogenous world ? Isnt it good to retain our local differences, to retain our cultures?

I agree with that.I think that diversity is the essence of life. Diversity of cultures, diversity of customs, diversity of foods, diversity of languages, diversity of architecture. It is the Europeans that who are really creating a mono-culture. They are creating architecture which is the same everywhere.  They are mass producing clothes that are everywhere. In every european city you go, you will find the same kind of shops selling the same kind of goods. So Europeans are destroying their diversity. By embracing people from outside Europe you do not destroy diversity, you promote diversity. We can maintain our culture but also we learn from other cultures. So you can maintain e.g. Italian cuisine but you can also learn from Chinese cuisine. And you can maintain and protect Indian cuisine but you can also have French cuisine. So diversity is good but we should not guard the diversity and say ''this cuisine is only mine cuisine and you cannot share it''. We should keep our culture but also share it with others.

Since I am coming from the Athens local team, I want to ask you if during your path have you stopped from Greece. What was your feeling? 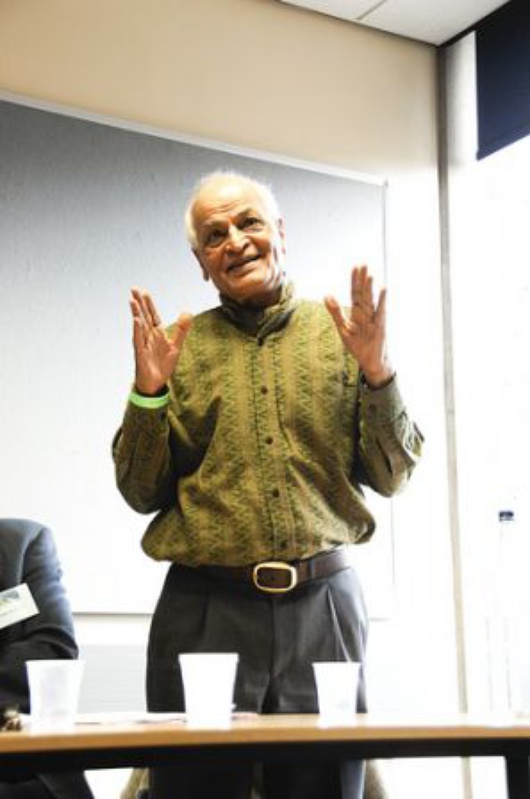 Greece is a really beautiful country. It has a tremendous history, climate and landscape. When I went to Greece I find Greek people very generous and they are hospitable. They were all welcoming you - even in the villages. I particularly liked that in rural Greece people bring their food to their village bakery and they are baking it there. A generous and hospitable people, with great history and civilization.

You come  from India, a country with rich history and culture. Are you afraid of people  who are ''imprisoned'' in their ancient heritage?

Ancient culture should be seen as a foundation upon which we always build. The ''house'' of new culture has to be built on ancient foundations. If you remove your old culture then you have nothing to be based on. We must not be afraid of our foundations, our history, our heritage. But we must not become slaves of our past. We must take what is good in that but always keep it dynamic, evolving.  Its a dance, a dance between old culture and new culture. It is good because in new culture you evolve, you grow. You embrace new things- when you are building a new building you embrace the new sky. But you need to have solid foundations. Greek people should not be afraid of their culture. They should be proud of it as I am proud of my Indian culture.

Many people though, are too pride of their culture, and therefore they do not produce anything new.

No they should produce. They should not be dogmatic and ''slaves'' of old culture. Old culture is your background, your context. But you must always produce new culture. That's why I like so much travelling. I like the confluence of East and West, the confluence of science and spirituality. And the confluence of arts and business too. When you combine the two, something new emerges. Like when a man and a woman meet then they produce a child. If you do not meet two there is no child. In the same way if you dont mix art and science, or science and spirituallity there is no new wisdom emerging. MIxing two particles together makes life.

Do you believe that now Western people are ''discovering'' the East? This ex-occidente lux comes to be again ex-orriente lux?